Demolition of the 10-story structure and adjacent parking garage faced challenges including busy streets, properly complying with NESHAP rules and working around power poles, live transformers and a popular wedding venue just across the street 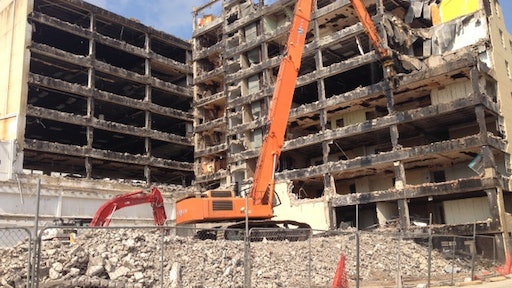 Following a highly complex selective demolition of the top three floors, demolition contractor Grant Mackay moved into the next phase utilizing the 750 Hitachi with a 130-ft. reach going up to nine stories.

Demolish a 180,000-square-foot, 10-story, 61-year-old building and parking garage including removal of concrete walls and foundations

In order to make room for a new 30-floor apartment building, the 10-story, 61-year-old-building currently sitting where the new apartment building was to be built needed to be demolished. Salt Lake City demolition contractor Grant Mackay estimated the project would take three months to abate the asbestos and two months to demolish the nearly the 180,000-square-foot structure, removing concrete walls and foundations. It turned out to present a number of challenges, including adapting to the wedding schedules of guests at La Colombe d’Or, a popular wedding venue located just feet away from the parking garage on site that was about to be demolished.

The garage was constructed of pre-cast columns, T beams and precast panels attached to the outside of the structure, which posed a falling threat to the hotel’s guests and property. Crews used mini-excavators with 500-pound hammers to safely demolish panels top-down and then an EC700 Volvo to demolish the rest of the garage.

Another challenge was that Montrose Boulevard is one of the busiest streets in Houston, and the tower stood just 10 feet back from the street. Since the city would let the contractor close only two of the four lanes on weekends, they needed to drop the heights of the building three stories on the Montrose side before the Hitachi 750 ultra-high-reach excavator could attack it.

An additional challenge was the presence of mastic on all outside walls, beams and columns. Since it fell under NESHAP rules, it needed to be segregated and hauled off in accordance with federal regulations. Another was to remove the elevator shaft and penthouse from the top of the structure to bring the top of the building into the safe working range of the excavator.

The elevator shaft demolition required the use of a 130-ton crane and a work platform which was suspended from the crane with a Brokk robot aboard. Grant Mackay operated the robot remotely to protect the operator from falling debris, using a proprietary sequencing process. Following a highly complex selective demolition of the top three floors, the crew moved into the next phase utilizing the 750 Hitachi with a 130-foot reach going up to nine stories. It had an Atlas Copco CC3300 multiprocessor with maximum cutting force of 882,000 pounds.

After the last of the building was demolished, the firm had two weeks to haul off remaining debris. Crews used a Volvo 700 excavator to complete the demolition while a Link-Belt 350 excavator loaded the debris into trucks. Crews finished the challenging project with three days to spare.