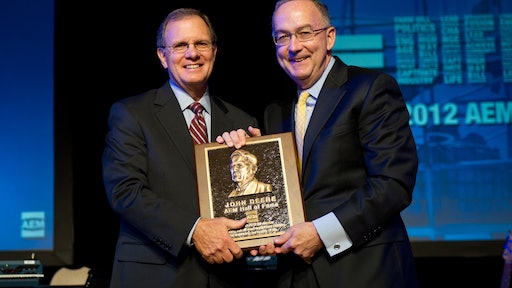 The Association of Equipment Manufacturers (AEM) announces the 2012 inductees into the AEM Hall of Fame, which recognizes and celebrates outstanding individuals in the off-road equipment industry, and their legacy of innovation, service and leadership. Their vision and hard work have been critical to advancing global economic and social prosperity; their legacy strengthens continued industry contributions to improving our quality of life, and serves as an inspiration for tomorrow’s leaders.

The 2012 inductees into the AEM Hall of Fame are:

AEM Hall of Fame inductees have been evaluated by an independent panel of industry experts on five criteria that are vital to the health of the off-road equipment manufacturing industry: 1) innovation, 2) industry contributions, 3) leadership, 4) corporate citizenship/social responsibility and 5) sustainability.

Below are summaries for each of the 2012 honorees with some of the reasons they were selected for induction.

John Deere was a leader in his day in vision, innovation, and improving the quality of life for his fellow citizens. The company marks its 175th anniversary in 2012, recognizing the significant influence Deere has had for almost two centuries in equipment manufacturing – an impact the Illinois blacksmith could not have imagined when he was first compelled to create tools that have evolved into machinery that helps build and feed the world.

“John Deere” has been synonymous with equipment almost since John Deere moved from New England to Grand Detour, Illinois, where his skills as a blacksmith were immediately in demand. Deere ultimately took his business to Moline, Illinois, which had access to better transportation routes and essential energy sources.

If Deere could have seen the future in 1837 when he created his innovative self-scouring plow for Midwestern farmers, he would have been amazed and proud to see that his namesake company would become a world leader in machinery manufacturing.

Deere built a global company on the core values of integrity, quality, commitment and innovation - one that produces machinery with a myriad of applications in agriculture, construction, forestry and turf care. John Deere made an everlasting mark and earned his place in the AEM Hall of Fame through the development of equipment manufacturing to its status today as a key contributor to our economic well-being and quality of life.

Pierre Bataille was an industry innovator and a responsible leader, contributing to economic development in France while improving quality of life for his workforce and the industry.

The technology he helped develop, high pressure hydraulics, played a part in the huge increase in productivity for agricultural works, handling operations and earthmoving. He was a pioneer in development of the hydraulic excavator. He was the instigator to use production assembly lines for excavators in the early 1960s, increasing production and reliability; his concept of the swing drive and boom remain a standard today.

A leader in social responsibility, Bataille offered interest-free loans to his employees, a majority of whom were former farmers living in poor conditions who then more easily became homeowners. He developed a technical training center to provide workers and excavator operators with job training. Bataille established one of the first staffed company cafeterias for his employees and a network of buses to safely transport them to and from work; while not a widespread practice in the 1960s, Bataille instituted noise-reduction measures in the plant and on excavators.

Bataille’s civic service included leadership of French standardiza­tion and business development organizations, and he also served as president of the Commit­tee for European Construction Equipment. In 1990, Bataille was awarded the rank of Officer of the Legion of Honor by the French government in recognition of his entrepreneurial leadership.

Keith, Leonard and Mervel Wood were problem solvers, risk takers and entrepreneurs who used these skills to fuel their drive for inventing and manufacturing. As pioneers in the development of rotary cutters and mowers, the Wood brothers helped create a prevalent product category for the short line industry.

One invention that dramatically affected the agricultural industry is the company’s iconic Batwingrotary cutter, known generically as the flex-wing rotary cutter, first shipped in 1963. Other key inventions include the patented single V-belt drive system, used on virtually all residential and commercial mowers in use today, and the single attachment pin blade retention system, a design still used on most Woods cutters today.

The brothers sought to adapt their equipment to all types, sizes and models of trac­tors, including two adaptors that were predecessors of today’s standard 3-point hitch. In the 1970s, the Wood brothers elevated product support to a new level, ensuring sales and service were available across the country in the days before overnight delivery.

Starting the company after World War II in Oregon, Illinois, the Wood brothers contributed greatly to job creation and development of skilled labor in the region, training thousands as welders, machinists, metal fab­ricators, painters, engineers and office personnel. Sustainability for the brothers was always about doing right, for example, metal scrap recycling (not widespread in the ’40s and ’50s).

Nominations for the next Hall of Fame will open in June 2013.

Compatible with excavators ranging from 30- to 45-ton operating weights and suitable for use in quarries or to move, sift and aerate large volumes of soil on excavating, earthmoving and large trenching projects.
MB America, Inc.
June 8, 2021