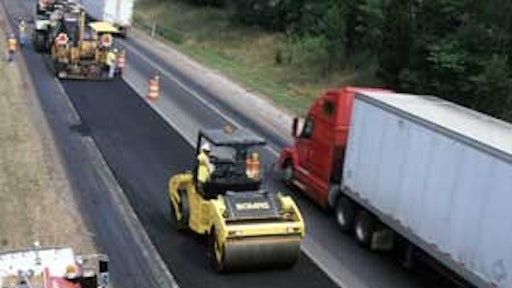 Systems like the BOP (BOMAG Operating Panel) provide data that can be used to verify and document the compaction process, and potentially reduce testing costs.

Technology designed to help you achieve your soil and asphalt compaction objectives has made tremendous headway in recent years, and is continuing to evolve at a relatively rapid pace. Its ultimate goal is to quantify density on the run - i.e., identify density in real time under the roller.

While the technology isn't quite there yet, there are several options currently available that can help you quickly and effectively reach target densities.

Soil compaction has essentially led the way with onboard compaction monitoring. As early as the 1980s, Europeans were using these systems to help determine the effectiveness of the compaction process. Similar systems began appearing in the U.S. earlier this decade.

At the heart of onboard compaction monitors is an accelerometer that measures the response or rebound of the drum in respect to the frame. This measurement allows a stiffness value to be displayed and correlated to density. (It's important to note that stiffness is not the same as density.) For example, loose, lightly compacted soil or asphalt will have a smaller response or rebound. "As you make successive passes, you typically will get a higher degree of rebound and a higher reading," notes Dave Dennison, BOMAG Americas.

This information can be used by an intelligent compaction roller - a roller equipped with a documentation and feedback system - to automatically adjust parameters such as vibration direction. The roller operator can also use the stiffness data to determine at what point to conduct traditional sonic and nuclear density tests and spot core tests.

"Currently this new technology needs to be used in conjunction with existing density tests," says Dennison. "We're not at a point where it can replace those tests. It's another quality control tool contractors can use to reduce the cost of the job by, in one way, reducing the number of core samples that may need to be taken."

"These systems provide operators with instant feedback and information they wouldn't otherwise have," adds Jon Sjoblad, Caterpillar. "The technology allows operators to be more proactive, and it provides information needed to make the correct choices to most efficiently build a good base."

Mapping out a clearer picture

GPS mapping systems are also becoming more accepted on compactors. They can help "paint the picture" by showing an operator's work pattern in real time, plus can improve night-time operations where darkness may obscure the rolling pattern.

Take Caterpillar's AccuGrade Compaction GPS Mapping and Measurement System, which ties in with the family of AccuGrade earthmoving technologies and grade control systems, including the analysis software suite AccuGrade Office. It allows you to track jobs and monitor productivity to ensure quality, as well as find hidden efficiencies on the job.

"These systems can improve quality through process control," Sjoblad explains. "Previous to these systems, operators would rely more on their senses, then wait for verification. There's downtime in this scenario. Also, only localized spots are tested, so you never really know if the whole job is compacted uniformly. There can be areas where there is poor compaction. But with this technology, you can see visual indications of compaction over every square foot.

"Uniformity is important in soil compaction," he continues. "If you have localized areas that fail, you have to go back and fix them. And remediation is a lot more expensive if it is done after pavement is laid, compared to fixing problems while the ground is open. An onboard compaction monitoring system can pick up hidden clay balls that a tester might miss. It boils down to if you can see it with the compaction monitoring system, you can fix it."

Many of these systems provide proof of performance, which is becoming more important as specs become tighter.

"From a quality control standpoint, there is a lot of information you can go back and review," says Sjoblad. "From a contractor's standpoint, if he can get documentation that tells him how he's done, then get someone to verify it, he's confident he can move on with the job. There are less testing costs and fewer people on the jobsite. Plus, you have documentation that tells you how uniform your jobsite is."

BOMAG's BOP (BOMAG Operating Panel) displays the stiffness, or EVIB, value of the material (as a bar scale or numerical display on screen), rolling speed, machine amplitude and temperature (for asphalt). You then have the ability to produce a printout, or strip tape. "For example, after you've made a pass, you can print out the data and quickly provide it to the quality control technician for justification and confirmation," says Dennison.

A step beyond BOP is the BOMAG BCM 05. This tablet PC shows the operator the work pattern in real time. "It won't replace any job responsibilities," Dennison states. "It's an additional tool that gives the operator and quality control personnel data earlier in the construction process, so they can identify soft spots or areas with low load-bearing capacity.

"By knowing where those are," he adds, "you can determine if you need to excavate the area, stabilize the area, improve the soil somehow, etc. The key is that you're getting information before you lay the asphalt and build the building."

Onboard compaction monitoring systems for asphalt are similar to those for soil in that rebound and response of the drum are measured, then data is fed back to the roller and/or operator. But unlike soil, temperature plays a critical role with asphalt, so the systems also include a temperature gauge.

Once asphalt reaches a certain temperature - about 140° to 150° F - it doesn't move much. If you continue to roll over it, you can over-compact it and start to shatter the aggregate, which creates more air voids.

"Sometimes operators stay on the material longer than necessary and give it another pass or two, just to be sure," says Dennison. "Experience may tell them they need a certain number of passes. But onboard compaction monitoring systems may indicate they've achieved a target stiffness in fewer passes. If you're saving passes, you're saving time, fuel and wear and tear on the roller, which are all positive things."

Compactor manufacturers are also addressing some of the challenges with asphalt by introducing drum technology that focuses on some of the obstacles.

For example, BOMAG offers drums with vectoring features that allow the drum to vibrate vertically, horizontally and at different positions in between. "The 'intelligence' in these rollers is the ability of the roller to make decisions for itself," says Dennison. "The roller can decrease the amount of force put into the material."

In addition, Wirtgen America has incorporated oscillation technology into some of its Hamm compactors. Oscillation technology adapts amplitude value automatically; ensures the roller stays in constant contact with the asphalt for faster compaction; and widens the temperature range by nearly 20%, so the roller can continue to work.

"The objective behind vibratory compaction is to rearrange the particles to draw them in and make them tighter to each other with as little air in between as possible," notes Bruce Monical, Wirtgen America. "There are a couple of ways to do that."

One is to pound the asphalt from the top down and drive impact forces at the surface downward. In this case, the force is greater at the surface than it is inside the material.

Oscillation, on the other hand, uses a side to side motion that sends a vibration wave into the asphalt. "It essentially shakes the material into place and allows the material to compact from the bottom up," Monical explains. Because it uses a "rocking" motion, the roller drums never leave the mat.

As new technologies continue to be introduced for both soil and asphalt applications, contractors will have even more tools in their compaction equipment arsenal.

"As manufacturers, we're trying to come up with better ways so contractors can do a better job? the base will be firmer, the road will last longer and won't need to be repaired as often and the asphalt is more dense," says Monical. "Overall, the goal is to have a better road for the dollars invested.

"We don't quite have density on the run," he acknowledges. "But we can give operators indicators that the material can still be compacted more, or that it's about as compacted as it will get. It's an evolving technology, and there are a lot of people working on the next step in the evolution."

Editor's Note: Read Kim's latest blog about how onboard compaction monitoring systems have made their way into walk-behind reversible plate compactors.