The Right Bang for the Buck 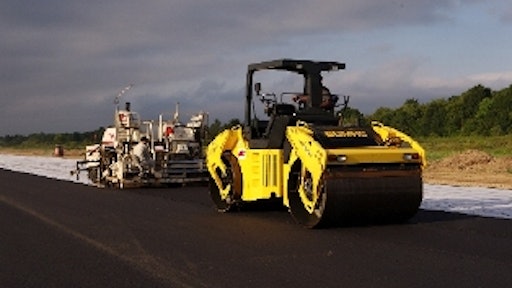 MENA, Ark. - Road construction can be a very profitable endeavor, provided that jobs are completed properly and deadlines are met. But when things go wrong, money has a funny way of suddenly becoming a negative factor in the equation.

Given that an incredible amount of taxpayer cash is on the table, road building is always going to be a serious matter that allows little or no margin for error. The strictest standards must be met. With so much on the line, it's no wonder that a growing number of road building contractors are turning to "intelligent" rollers that take the potential guesswork out of the asphalt compaction process.

One company that has embraced Intelligent Compaction technology is JoB Construction, a Poteau, Okla.-based asphalt contractor with a project territory that covers Oklahoma and Arkansas. Not unlike the decisions made by most businesses, JoB's choice to purchase an Intelligent Compaction roller wasn't made on a whim. It came because of a bad experience that the company was not eager to repeat.

Although JoB does its fair share of commercial work, the company's primary expertise is producing and paving asphalt on federal and state highways. "When we get to a job, the groundwork has already been completed," said Billy Hoffman, vice president of JoB Construction. "We're focused on the asphalt portion of a project."

Larger contractors that cover every phase of road construction - from excavation to paving - have the advantage of controlling an entire project from beginning to end. Any mistakes that the company should happen to make are its own. This doesn't make the reality of a penalty from the DOT any more pleasant, just slightly easier to swallow.

For contractors like JoB that handle only one aspect of a construction operation, similar problems can be downright maddening if the error occurred prior to arrival on site and nothing could have been done to avoid failure. It was this type of scenario that JoB was looking to avoid with its investment in a BOMAG BW190AD-4AM tandem-drum vibratory roller, a machine that the company now utilizes not only for asphalt compaction, but also to test the integrity of the base material already in place prior to paving.

JoB and its 45 employees have certainly found a comfortable niche with asphalt work. But there have been occasions where things haven't gone so smoothly. One such incident occurred during construction on a portion of U.S. Highway 270 near Mena, Ark., a project that the company is finally bringing to a close after being sidetracked by a penalty that arose from complications JoB was powerless to control.

"We were helping to reconstruct the shoulders on the highway," said Hoffman. "It was an old road with tons of potholes, so we patched the holes as required by the state, and then laid a leveling course over it for traffic to travel on while we were building the shoulders. A short while later the subgrade fell under in one spot and caused our pavement to fail, and unfortunately we got stuck with the penalty."

In business for nearly 40 years, JoB wasn't about to let one setback get in the way of future business. The company also wasn't going to sit around and simply hope that the same thing wouldn't happen again. Instead, JoB went in search of a solution to prevent similar issues from ever occurring in the first place.

"The base that you're laying asphalt on is going to vary as you move down the road," said Hoffman. "The density may be 92 percent in one spot and 98 in another, and it can be difficult to obtain reliable readings over the course of a project. So we looked at different ways we could go about solving this issue."

JoB's equipment fleet consisted of four Cedarapids asphalt pavers and five Dynapac rollers before Hoffman made the decision to bring in the BW190AD-4AM roller with the Intelligent Compaction system. "I read an article about Intelligent Compaction and it seemed to be exactly what we were looking for," said Hoffman.

Based on the changing material stiffness and density, the roller automatically adjusts output energy of the drum. This is accomplished through a Vectoring process that manipulates the angle of the drum's energy to produce glancing blows where higher density has already been achieved, and direct blows to the material where soft spots exist. The system essentially ensures that no areas are under-compacted, while also avoiding damage from unnecessary over-compaction.

While the BW190AD-4AM is designed primarily for achieving optimum compaction on asphalt surfaces, JoB has accomplished what it set out to do by also using the machine to proof-roll road base before paving work begins. "We'll start by running a test strip with the roller to show the density of the existing base and define that we have a solid surface to work on," said Hoffman. "At the very least it gives us a point of reference to come back to, and a foot to stand on, should there be any questions or issues with the road at a later time."

That reference point comes in the form of documentation provided by the Asphalt Manager system, which includes an onboard printer to produce a paper record of the achieved compaction results. Job documentation has always been a critical component of the road construction process for contractors, given the extreme financial burden when they must answer for any failure on a completed road. The best that could previously be expected was a thorough sampling of random density tests from multiple spots on a project. With the equipment now automatically providing documentation for JoB, Hoffman acknowledged feeling far more confident about the company's work.

"Without a doubt the roller has already saved us money," said Hoffman. "Now we can come into a job and immediately determine the reliability of the subgrade. And if it isn't built to standard, we can make the argument with the DOT right away. You can't lay asphalt over a mattress and expect it to hold up."

Having the ability to qualify results is obviously important, but the benefits of getting proper compaction the first time go beyond avoiding penalties and fines. It's also about optimizing the use of time and road materials. Over-compaction can ruin thousands of tons of asphalt and cause a contractor to dedicate man-hours to performing the same task a second time.

"Our jobs run in the vicinity of 20,000 tons of asphalt on average," said Hoffman. "Typically our crews are 9 to 12 men strong and are putting down about 1,200 tons in a day," said Hoffman. "All of that can be lost if you don't know what your roller is doing to the material. The roller that we used previously on overlays is just so big and heavy. It's a great roller, but with some of the Superpave mixes we had a tendency to over-roll and crack the material. That basically amounts to wasted asphalt and a wasted work day."

Hoffman's experiences with jobs where asphalt has been over- or under-rolled have led him to believe that the number of passes isn't what matters. Getting it right is what counts. "Being objective for comparison's sake, I can say that I've seen the 190 complete jobs in fewer passes than other rollers, but I've also seen it take an extra pass," said Hoffman. "But the whole point is that quicker is not always better. There can be quite a bit of density variation in different areas of a project after one pass, and the smart roller will eventually even it out. And that's the reason we bought it - to get proper compaction every time."

The benefits provided by the BW190AD-4AM have quickly led to the roller becoming the primary asphalt compactor in JoB's fleet. "We use it on both commercial and highway jobs," said Hoffman. "Our operator loves it because the maneuverability is outstanding. He can move along the guardrail and position himself easily. And on top of it all, he can watch the monitors and never have to worry about over-rolling or under-rolling the product."

JoB's faith in the Asphalt Manager technology is evident from a glance at the roller's itinerary. Before heading to the Highway 270 project, the roller was out on a parking lot at a local college. That job was preceded by work on a four-lane interstate byway stretch of U.S. Highway 69 near McAlester, Okla. Two airport jobs are next on the docket.

"You'd think that a complex system would provide some operational challenges, but really the most impressive thing about the roller is its simplicity," said Hoffman. "Whatever the machine is doing, we don't need to think about it. It just goes out and gets the job done. Everything that was advertised and promised to me that the roller can do, it has proven to me it can. I literally got the bang for my buck."