The Science of Soil Compaction

Understanding the whys and hows of soil compaction can help you make efficient equipment choices. 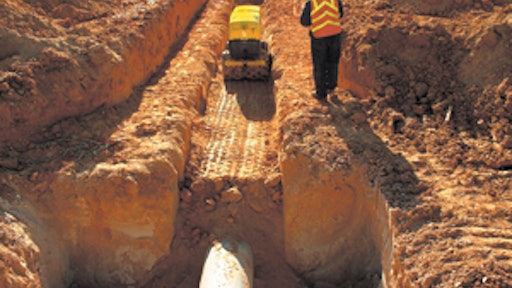 When you look at the walk-behind compactors in your fleet, chances are you don't think of them as precise scientific instruments. Yet, soil compaction is a science and it requires a certain degree of precision. Understanding some of the science behind it can help you improve efficiency on your jobsites.

To choose the right equipment for your job, you need to first understand something about soils and how they are compacted. According to Mark Conrardy, sales engineering manager at Wacker Corp., soil can be broken down into four basic groups: clay, silt, sand and gravel. "The most important characteristic is particle size," he states.

Clays consist of the smallest particles, which are usually less than 0.00024 in., followed by silts, sands and gravels, with particles ranging from 0.08 up to 3 in. in diameter. Anything larger than 3 in. is considered a boulder.

According to Ron McCannell with Weber Maschinentechnik GmbH, granular and mixed soils with less than 10% to 15% cohesive soil are easy to compact with vibrating plates and rammers. But in order to achieve a high density, there must be a mixture of various particle sizes that can fill the voids between large particles. "Uniformly graded granular soils cannot be compacted," he notes.

"The soils easiest to compact are soils with spheric and smooth particles," he continues. "Soils with irregular particles are more difficult to compact but, on the other hand, they have a larger bearing capacity."

The ability to compact a soil depends in part on the particle distribution. "Soils with almost the same particle size, like fine sand, are called single-fraction soils. Soils with several particle sizes are called mixed-fraction soils," McCannell states. "Single-fraction soils are difficult to compact as there are no or very small amounts of fine particles that can fill up the voids. Mixed-fraction soils can be compacted well as there are smaller particles which, due to the vibratory effect, move into the voids between the larger particles. A high density is obtained and, consequently, a higher bearing capacity."

Once you know the type of soils you will be working in, you can determine which piece of equipment is best for conditions.

"The type of compactor that will be the most effective is determined by the bonding forces that the two soil groups display," says Conrardy. "Cohesive soils require some type of impact energy to break down the molecular bonds and release air and excess water that may be trapped in the soil."

According to Wenzel, the types of machines that can best apply this energy are rammers or sheepsfoot rollers, which produce both high impact and the necessary shearing force. "Cohesive soils require high amplitude, high impact forces to squeeze and mold the material together," he explains. "[Shearing forces] are achieved by the design of the shoe-plate on the rammer or the protruding mass of a roller. The elements knead and break up the soil to allow the impact force to do its work."

Since particles in cohesive soils are flatter, with water and air between them, they require low-frequency, high-amplitude impact energy for compaction, says Peter Price at Bomag Americas Inc. Rammers provide such energy as they jump up and down on the soil, removing the voids between the particles. In contrast, plates use high-frequency vibration to agitate particles so they settle under their own weight.

Until recently, there has been no one machine that could do it all, but that is changing. "Contractors want one machine to do all jobs," says Price. Consequently, Bomag has developed its Dash 4 Series reversible plate, which can compact a wider range of materials, such as granular soils with some cohesive content. "You can't take our plate and use it on clay, but you can run it on native backfill, which is a mix of cohesive and granular."

Like many things, soil compaction is an area where you can get too much of a good thing. Soil can become over compacted, which threatens to undermine its bearing capacity.

"Continued compaction can cause soil to break down and cause segregation in soil mixes," says Fabian Salinas at Dynapac. "This leads to weaknesses in the compaction layers of sub-bases."

Conrardy agrees, adding, "Soil can only absorb a certain amount of energy over a given period of time. If too much energy is applied, the soil can shift and move, breaking down the compaction previously accomplished. The result can be fracturing or breaking up the soil particles so that the soil composition actually changes. The changed material actually has a lower density because the new particles are smaller."

Price says over compaction happens more than most people realize. A good remedy is to take note of the machine's behavior during operation and to follow the manufacturer's recommendations. "If the [rammer] jumps erratically, get off the material because that means the energy is going into the ground and coming back off the material and into the machine," he advises.

Wenzel explains, "During compaction of loose fill (soil), the machine's energy is directed and consumed by the soil. Once the soil particles are densely packed, this energy will be reflected back to the machine and the operator instead of being consumed in the soil." Consequently, the most practical and obvious sign of over compaction is the reaction of the machine being used.

As a general guide, experts advise limiting passes over the material to three times for a rammer and four times for a plate. Or better yet, simply match the machine to the depth of soil being placed. "Most manufacturers will rate their machines according to the depth of soil, or lift, it can compact," says Conrardy. "This rating is usually on a layer of well-graded sand and gravel material, which is a common backfill for footings, foundations and areas where higher densities are required."

Determining the degree of compaction for soils on a particular project, and whether the results meet required specs, is normally the responsibility of a soils engineer. To help the testing process progress more quickly, Weber has introduced the Compatrol system, the first continuous compaction control system for reversible soil compactors.

With the Compatrol system, the operator is made immediately aware of any potential problem that might develop and affect results, such as over compaction, under compaction or situations where the soil is not compactible. The system is based on a frequency band analysis and consists of a display and acceleration sensor. The technology measures the acceleration increase and decrease of the soil compactor's base plate; compares the measured values with the registered soil characteristics; and translates the results into "electric voltage." The displayed compaction result is easy to understand.

"Until recently, these compaction meters or compaction control devices were only available on some asphalt rollers and certain vibratory rollers used for large-area soil compaction," says McCannell. "But today, they are also available on hand-guided reversing plates being used in confined areas not accessible to large rollers."

Bomag is also developing its own system for plate compactors that will match compaction to density requirements. It should be available in North America sometime within the next year or so.