Get Compaction In A Tight Spot 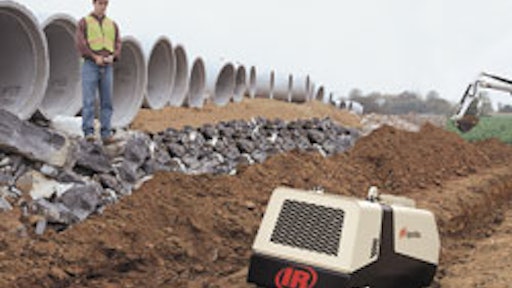 Both reversible plates and trench rollers can compact soil in confined spaces. When considering which of these compactors to use, the type of soil and size of the job need to be taken into account. But there are other things you also need to consider.

Match compaction to the soil

All vibratory plates - not just reversibles - are suited to granular soils, such as sand or gravel. Cohesive clay or silt-type soils, on the other hand, are best compacted by a trench roller or rammer.

When looked at under a microscope, cohesive material is made up of very small, pancake-shaped particles, Price points out. In between those pieces is either air or water. Impact force is required in order to squeeze the water or air out.

"With granular material, you have to excite the particles via vibratory frequency so they start moving in all different directions," Price continues. "The frictional force between the particles is then reduced and the particles settle under their own weight."

This means operators working with smaller aggregate sizes (1 in. and smaller) need a higher frequency unit to move the material and achieve compaction. As a rule of thumb, reversible plates tend to provide high-frequency vibration, but low amplitude (height at which the machine "jumps" off the ground), while rollers provide low-frequency vibration and high amplitude.

"With their low frequencies and high amplitudes, rollers are better in cohesive soils because they tend to push the soil particles together - like kneading bread - forcing molecules together and squeezing air out," says Frank Wenzel, vice president of engineering at Stone Construction Equipment. "Rollers won't work on granular materials as well. But plates, with their high frequencies and low amplitudes, vibrate the granular material better to compact it."

On the other hand, some larger reversible plates, with triple shafts, can be used on cohesive soils.

Obviously, it's important to consider the type of soil you will be working in when deciding if a reversible plate or a trench roller is the answer. In areas where the soil is predominantly sandy, such as in Florida, reversible plates are more commonly used. However, in an area with more clay-like soil, such as in Georgia, trench rollers are typically more prevalent.

Along with soil type, the size of the job needs to be taken into account. Mickey Benedict, product manager - soil with Ingersoll-Rand, recommends using common sense when choosing which machine to use. "If you have a small, narrow trench, a rammer or small trench roller would suffice," he notes. "As the job gets bigger, the machine gets bigger."

The name "trench roller" tends to pigeon-hole these units. Trench rollers vary in width, from 24 up to 34 in., depending on the manufacturer. "The narrower machines can be used for burying utilities. As the machines get bigger, they can be found doing foundation work, working around curbs and walls and doing site prep," says Benedict.

Reversible plate compactors are also easy to maneuver in tight, confined areas such as trenches, along walls and around pipes. In addition, they can compact thick lifts, says Udo Boersch, president of Ammann America Inc. "If you have a pipeline trench with a really thick lift, then you'll want a reversible plate to do the job," he explains.

Some of the larger reversible plates can successfully compact lifts of material up to 30 in. thick. "Due to the reversible plates' size and higher centrifugal force, they can compact deeper lifts than conventional forward plates," says Boersch.

A difference in mobility

The ability of reversibles to impart more energy into the ground, and therefore compact thicker layers, is inherent to the plate design.

A forward directional plate has one exciter shaft with an eccentric weight that generates the centrifugal force to move the plate forward, plus supply vibration to the ground. With a reversible plate, there are two exciter shafts, each with an eccentric weight. They are timed in such a fashion that you can turn the shafts in the opposite direction and the same force that carried the plate forward now carries it in reverse.

Because reversible plates have two shafts and thus two weights, they impart more energy into the ground than forward plates with only one shaft.

Some manufacturers also offer reversible plates with three shafts, which are designed to get more power and compactive force out of the machine. Not only does this allow the units to pound through thicker lifts, but it enables the plates to be used in applications with cohesive soils.

"The triple-shaft exciter system causes the plate to avoid erratic movements, allowing smooth travel even through heavy, cohesive soil," says Boersch. "The plate can climb obstacles and backfill with high moisture content without the usual suction effect, which can cause a plate to come to a complete standstill."

Trench rollers also have the ability to turn in their own "spot", according to Benedict. "A trench roller's maneuverability is excellent," he states. "Plates are sometimes harder to 'steer', so they can be hard on the operator who has to 'push' the unit around. Because rollers have a separate drive system, they're easier to move."

Wenzel adds that trench rollers can compact some pretty thick lifts themselves. "Most plates are only effective on an 8-in. lift," he notes. "But most rollers can tackle 18-in. lifts."

Between reversible plates and trench rollers, the speed of the units is equitable. But when it comes to gradeability, trench rollers tend to win hands down, says Wenzel.

"Trench rollers definitely have the advantage when it comes to navigating grades," Wenzel comments. "Some plates can hit the ground as hard as a trench roller, but they can't climb steep slopes like a trench roller can."

The Science Behind Vibratory Compaction

You might have various types of light vibratory compaction equipment in your fleet. But do you know what this equipment is actually doing? Compaction and Paving, Theory and Practice from Dynapac provides a glimpse at what is happening:

Vibratory compaction equipment makes use of a vibrating mechanism, which normally consists of a rotating eccentric weight.

Vibratory compactors use a combination of dynamic and static loads. They deliver a rapid succession of impacts to the underlying surface from where the vibrations, or pressure waves, are transmitted through the material to set the particles in motion. This virtually eliminates the internal friction, and facilitates the rearrangement of the particles into positions that result in as low a void space and as high a density as possible. The increase in the number of contact points between the particles leads to high stability and strength.

Owing to the cohesive forces between particles in most soils, the vibratory force must be combined with loads of a certain magnitude to overcome the cohesion. On sand and gravel, which have a low apparent cohesion, comparatively light loads are sufficient. This means that light rollers and plate compactors can be used with good effect.

Clay and other cohesive materials require heavier loads, and therefore require the use of comparatively heavy compaction equipment. However, these types of material can only be compacted in relatively thin layers.

Initially, vibratory compaction was only considered suitable for rock fill, sand and gravel, but as vibratory techniques developed, the method has come to be used for clay soils and successively for asphalt compaction, as well.