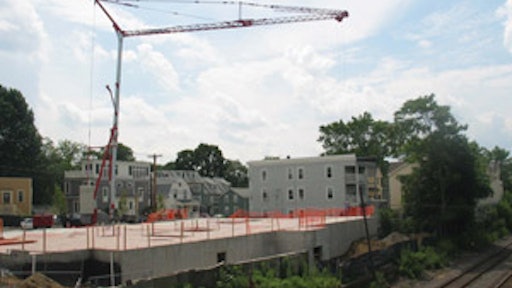 Masonry subcontractor Joseph Rizzo & Sons, New Castle, DE, had originally anticipated a straightforward plan to build a cement block addition onto the high school in Elkton, MD. However, the existing structure blocked access to two of the walls, limiting the ability to deliver bundles of cement block to workers. The general contractor also would not permit any type of equipment onto the addition's cement slab foundation. This ruled out using rough-terrain forklifts or other material-handling equipment to deliver the bricks.

Joseph Rizzo & Sons turned to a 2-ton-capacity Potain Igo MA21 self-erecting crane. With nearly 63 ft. of height under hook and an 85-ft. radius, the unit provided the necessary reach to access the entire jobsite. And with its small footprint, it did not take up much space on the already crowded site.

According to Kevin O'Connell, self-erecting crane product manager for local Potain dealer Shawmut Equipment, there were many benefits that made this crane a suitable fit for the job. "School was still in session during construction of the addition, so the crane's electric drives allowed for quiet operation," he states. "Because the Igo MA21 can be operated with 220-volt, single-phase power, the contractor tapped into an existing power source on the site, eliminating the need and expense for a three-phase generator. It only took about an hour and a half to position, erect and complete its required checkouts."

The radio control feature of the crane was particularly beneficial for delivering brick bundles to masons working on scaffolding. It allowed the crane operator to stay with the load the entire time to position the bricks exactly where they needed to be. "Even with picks that traditionally would have been blind with a hydraulic crane, the operator was able to reposition himself and stay with the load at all times," says O'Connell.

Creative equipment choice
Peak USA, a wood frame contractor, found similar success using an Igo 50 self-erecting crane on a space-constrained site in Cambridge, MA. Richdale Place is a 38,000-sq.-ft. multi-unit residential building with a parking structure as its foundation. The building is made of panelized wooden walls, which are fabricated off-site, then transported to the site for final assembly on the foundation. Once the walls reach the jobsite, they are removed from the trucks, staged, lifted into place and attached to the structure.

The urban residential setting has presented some challenges to this process. A working railroad track borders the entire back side of the rectangular corner lot, eliminating the option to place equipment on that side of the structure. On the other side is a busy street, which the city would prefer to keep open.

Kevin O'Rourke, owner of Peaks USA, indicates that the unique constraints of this site forced them to think beyond their typical equipment choices. "We were limited in the equipment we could use to lift and set panels," he says. "So we had to think creatively. That's why we decided to rent the Potain Igo 50 from our local Potain dealer, Shawmut Equipment."

O'Rourke owns a Peaks division in Canada, and has previous experience with self-erecting cranes on Canadian jobsites. His familiarity with the crane gave him the confidence to specify it for this job.

The unit's 76-ft. height under hook and 131-ft. operating hook radius provided access to the far corners of the structure without having to use rough-terrain forklifts on an already crowded site. The radio remote control feature also allowed the operator to stay with the panels while picking from the staging area and setting them for the carpenters. "This makes for a much safer jobsite because the crane operator can always be talking with the workers on the structure," says O'Rourke.

"Because the Igo 50 only requires a 20-ft.-diameter area to set up, the Peaks crew was actually able to erect the crane between the foundation of the building and the sidewalk - blocking neither the street nor sidewalk," adds O'Connell.

Join us to hear what types of jobs suit excavators best and what factors to consider when making your selection. Plus, you’ll learn about the attachments and technologies available to make your excavator even more versatile, efficient and productive.
March 2, 2021

Manitowoc launches the Potain Build Better, a new site that combines a clean and modern user interface with a range of useful tools and resources to help customers and dealers find pertinent information.
Manitowoc Cranes
December 22, 2020
Follow Us