Constructing One of the Longest and Highest Viaducts in Portugal 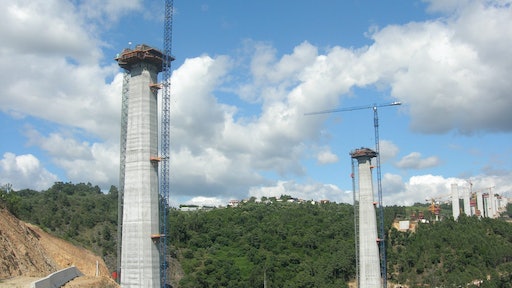 Constructing one of the longest and highest viaducts in Portugal as part of the Transmontana Highway over the Corgo River.

The Corgo Viaduct has a length of 9,170 feet, a height from the bottom of the valley of 754 feet, a main span of 984 feet, and will run over three roads and one railway line. This viaduct, one of the longest and highest in Portugal, is part of the Transmontana Highway, which will link the city of Oporto to the Spanish border.

Pillars number 18 and 19, the highest of the whole structure, are being built by two Linden Comansa Flat-Top tower cranes, model 21 LC 400, with maximum load capacity of 39,680 pounds and erected with jib lengths of 229 feet, allowing them to load up to 11,020 pounds at the jib-end.

In order to ensure the stability of the cranes at such heights, each one holds four ties to the pillar, at heights of 154, 266, 370, and 511 feet respectively, and with a length from the crane’s mast to the viaduct’s pillar of up to 32 feet.

Ibergru also executed the project of tie frames. According to the company’s technical director, António Fonseca, its installation has demanded a strong coordination with the works in progress. "The metal sheets for the ties were set on each pillar by night and during the sliding of the formwork, allowing the sheets to be placed in merely 3 hours," Fonseca said.

Beside the common works of this type of jobsite (hoisting of concrete and iron), the cranes have lifted and assembled the framework trolleys and are also assisting the assemblage of the suspension cables of the bridge. The tasks comprised by the assembly and disassembly of the supporting platforms located around the pillars due to their position, both large weight and dimensions, were especially complicated to perform.

"The 21 LC 400 tower cranes are matching the high requirements of this type of project," said Luis Nogueiro, project director, allowing for "minimal downtime periods while executing simultaneous tasks such as the segments of the deck, the mast and the suspension system" and "working 24 hours a day while constructing the pillars with sliding formwork."

Production Director José Manuel Rio and Davide Borges, Technical Department, say the usage of these cranes allowed the company to minimize the number of risky activities inherent to work at such heights - many heavy large-dimensioned structures have been preassembled on the ground, and then lifted up to the deck level so to avoid assembly works on the top of the pillars.