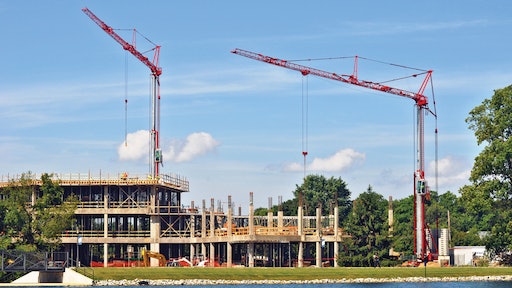 Two Potain self-erecting cranes replaced a conventional tower crane on this Cedarville University project. Self-erectors don’t need foundations or much land preparation, and were instrumental in beating a tight deadline.

Speed construction of a three-story health science center in a project for Cedarville University in Ohio that originally called for a conventional tower crane.

Two Potain self-erecting cranes helped turn a three-week weather delay into an early completion on a project at Cedarville University in Ohio. The 6.6-ton HDT 80 cranes played a central role in the construction of the $16.5 million Health Science Center, which will house the nursing and pharmacy programs at the University.

“The self-erectors didn’t need foundations or much land preparation,” said Keith Jenkins, sales and marketing manager at Capital City. “They can be transported at 50 mph on one truck and erected and ready to work in no time. Benefits like this, on a project with a tight budget and an even tighter schedule, made them an ideal choice.”

The three-story building was constructed as a cast-in-place concrete structure, so the cranes lifted a variety of materials including rebar, forms and concrete. To get the job back on track, the cranes utilized their full-length 147-foot jibs and lifted maximum loads of 6.6 tons.

The HDT 80s were supplied with height adjustable cabs. This option proved particularly advantageous as the mast-mounted cabs gave the operators a choice of vantage points and improved visibility over the expanse of the project.

Sort your vehicle tracking with Quartix. || Save on fuel and maintenance, increase productivity, and protect your team. || Speak to our team to find out more.
September 2, 2020
Latest
Crane

Engineered for the most demanding trades in the world, Milwaukee Tool’s MX FUEL line of equipment is powered by industry leading lithium-ion technology batteries that are conveniently interchangeable on all MX FUEL equipment.
October 20, 2020