Fourteen Flat-Top tower cranes aid in the construction of an extension of the A4 highway in Portugal, including tunnels, road and 13 viaducts 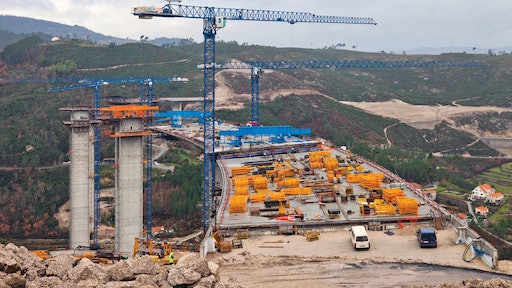 The finished extension of the A4 highway in Portugal will include tunnels, the road and 13 viaducts.

The Challenge:
Construct an extension of the A4 highway in Portugal, including tunnels, road and 13 viaducts.

The A4 highway in Portugal, which joins the cities of Oporto and Amarante, north of the country, has a length of 39.15 miles. In the future, it will join Oporto with Braganza and the border with Spain with more than 93.21 miles, in which the Portuguese State and the concessionary companies are already working. The budget invested in this project, which will improve the road connections between North-East Portugal and Spain, is estimated to be superior to more than $950 million.

The first section of this extension, which communicates Amarante and Vila Real, has a length of 18.52 miles. The consortium formed by construction companies Somague and MSF Engenharia is in charge of the works, which include two tunnels with a total length of 3.54 miles, and 13 viaducts with a total of 2.49 miles. At four of these viaducts, 14 Linden Comansa tower cranes are being used thanks to Ibergru, official distributor of the Spanish company in Portugal.

Viaduct No3, in the valley of the Marão river, will be the highest and longest of all those of the highway, and one of the biggest in Portugal. It will have a height of 439.63 feet, width of 95.14 feet, and length of almost 2,988.85 feet. Six Flat-Top tower cranes from Linden Comansa are being used at its construction: five 21 LC 290 and one LC 5211.

As well as renting all the Linden Comansa cranes on the jobsite, Ibergru has contributed its experience in qualified technical consultancy in large projects, guaranteeing that the work is being executed in the best conditions of efficiency and safety.

When the works are finished, in 2012, the new A4 highway will be the third longest in Portugal and will absorb the traffic of one of the roads with more incidents, significantly improving the safety of the drivers.

Constructing One of the Longest and Highest Viaducts in Portugal