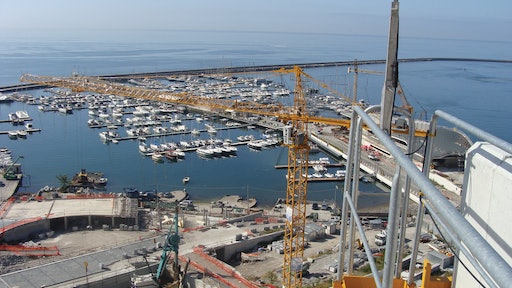 Three Potain tower cranes will spend the next three years working in strong winds and sea air at an extensive coastal development in Salerno, southern Italy. The cranes, which were erected earlier this year, are lifting a variety of construction materials and equipment to build a seven-story crescent shaped building that will define a new landscape for the city’s port.

The development, dubbed “the front of the sea” project, is located between Salerno harbor and the marina. It comprises a large semi-circular building called The Crescent, which borders a public square between the building and the sea.

The three cranes are 12-ton capacity MD 310 C K12s, two of which are owned by RCM Costruzioni Spa and the other by Ritonnaro Costruzioni Spa. The two main contractors are working together in a joint venture on the project.

The cranes are working up to eight hours a day, six days a week. They are responsible for a range of activities including ground preparation work and lifting 10-ton reinforced concrete slabs that will make up the structure of the modular-designed building.

Every piece of equipment added to your fleet brings revenue opportunity, and here’s how to balance that with owning costs and operating expenses so it eats the least amount of profits
Lonnie Fritz
October 21, 2020
Latest
Crane

Place your bid on this 2013 Case 590 Super N 4WD Backhoe Wheel Loader. Click to see all the specs, features, and photos. Place your bid before Tuesday!
October 22, 2020