A Terex CC 2500-1 crawler crane dealt with space constrictions and a tight time frame to lift and place a 584,225-lb., 230-ft. steel footbridge over an Autobahn freeway 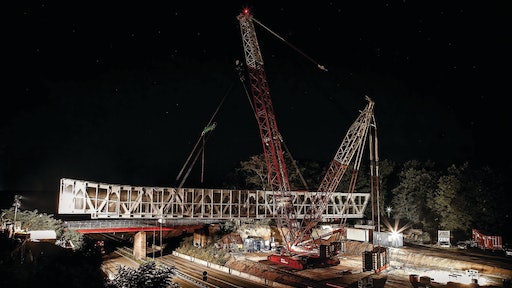 The CC 2500-1 crane lifted the bridge to a height of 33 ft., moved forward 16 ft. under load and swung the bridge into position.

Lift a span of steel footbridge into place over the Autobahn during a small time window overnight.

Mainz-based crane service provider Riga Mainz lifted a 584,225-pound, 230-foot-long steel footbridge over the A6 freeway near Kaiserslautern on the night of September 29, 2012. The constrained space conditions at the freeway made the Terex CC 2500-1 crawler crane the ideal choice for the lift.

The A6 “Autobahn” near Kaiserslautern is one of the most heavily used roads in the region. The large amount of traffic during rush hour was the main reason why it became necessary to expand the road from four to six lanes. This made the previous footbridge, which passed over the freeway and led to the nearby Caesar Park recreation area, too short – so it had to be replaced.

During the weeks before the actual lift, the bridge sections to the right and left of the freeway had already been assembled and erected. To make it possible to place the bridge, the freeway was closed off in both directions between 6:00 p.m. on Saturday and 8:00 a.m. on Sunday. Riga Mainz had to bring the crane to the freeway, perform the lift and clear the road during this short amount of time.

“This type of freeway lift is always complex and requires a perfectly coordinated team and an absolutely reliable machine. This is why we decided on the CC 2500-1 for this project – it’s easy to transport and set up, and it’s enormously powerful despite its compact dimensions,” explains Riga Mainz project manager Kathrin Marx.

Only 24 trucks were needed in order to bring all the required components for the CC 2500-1, including the counterweights, to the site. Three days were scheduled for crane assembly, in which five Riga Mainz technicians set up the Terex crane right next to the freeway on Thursday with the support of an assist crane. The CC 2500-1 was fully assembled, with a 177-foot main boom and a 98-foot Superlift mast, on time on Friday. The 440,924-pound superlift counterweight was mounted immediately before the lift at the closed-off freeway.

The CC 2500-1 was ready to start working on time at 9:30 p.m. With a counterweight of 264,555 pounds on the superstructure and without a central ballast, it was perfectly stabilized for the lift. Riga Mainz general manager Uwe Langer performed the lift. After the Superlift counterweights had been mounted, the bridge was slung. However, since the steel structure’s center of gravity was not at its center, the rigging equipment was specifically selected to counteract the imbalance.

Once everything was in place, the CC 2500-1 lifted the bridge to a height of 33 feet, moved forward 16 feet under load and swung the bridge into position. Then, Langer reduced the main boom’s angle from just under 82 degrees to 76 degrees in order to increase the working radius from 36 to 52 feet. This placed the bridge exactly above the corresponding mounting points so that it could be perfectly placed on them. The lift was completed as planned around 11:30 p.m. and the road was opened on time.