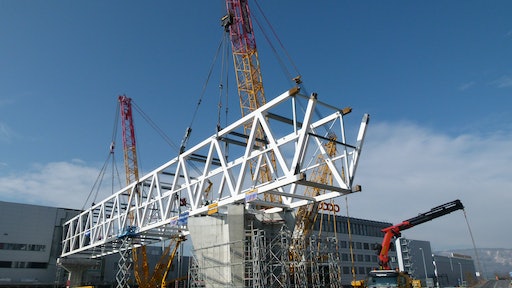 The way the premises were laid out made it impossible to lift the two-level bridge as a single unit over the road between the two buildings, so the manufacturer delivered the steel structure in the form of individual components instead which were welded together into a total of seven bridge elements at the worksite. These elements were then placed on the bridge’s three piers in five lifts.

“The individual bridge components had enormous gross weights of up to 303 tons and required us to use working radii of up to 95 feet, which made it absolutely necessary to use the largest crawler cranes available in all of Switzerland — our Terex CC 2400-1 and CC 2500-1 duo,” explains Toggenburger Project Manager André Huber. Of course, the two cranes first needed to be transported to the worksite in Schafisheim, which took a total of 48 trucks.

Once there, Toggenburger’s experienced team and the ease of assembly of both cranes made it possible to set up the units in a mere two and a half days despite the limited space available and the fact that delivery operations continued at the premises. For the upcoming lifts, the seven-person team set up the CC 2400-1 crane with an SSL configuration featuring a main boom length of 157 feet, a counterweight of 176 tons, a central ballast of 44 tons, and an SL counterweight of 265 tons. The CC 2500-1 crane was configured almost identically. The only difference: the SL counterweight for the CC 2500-1 weighed 276 tons. A 143-ton hydraulic crane was used as an assist crane.

The way the premises were laid out made it impossible to lift the two-level bridge as a single unit over the road between the two buildings, so the manufacturer delivered the steel structure in the form of individual components instead. These components were welded together into a total of seven bridge elements at the worksite. These elements were then placed on the bridge’s three piers in five lifts.

“This required an extraordinary level of precision, since the tolerances for joining the individual elements were a matter of millimeters,” explains Toggenburger’s Michael Dudler, who oversaw the project together with Huber. Special yokes were fabricated in order to pick up the elements. The design behind these yokes made it possible not only to attach hoist cables to them with shackles but also to implement the complex approach used to align the bridge elements. This approach consisted of two elements being lifted simultaneously, with one element being rigidly rigged to one of the two cranes while the other crane supported an arrangement with 154-ton strand jacks placed at three rigging points between the hoist cables and the yoke.

These strand jacks, in turn, made it possible to precisely control the lateral and longitudinal position of the second element using hydraulic power. In addition, the bridge elements’ size made it necessary for the Toggenburger team to use Genie aerial work platforms to rig the load-securing equipment. “Despite the sophisticated setup we had for maneuvering the loads we were a little worried because any strong winds would have prevented us from performing the lifts,” Dudler says. But the anxiety proved to be unwarranted, as the weather was magnificently inviting on both lifting days, with the result being that several hundred people gathered on the morning of Saturday, February 14, 2015, to watch the spectacular first two lifts at the site.

The Terex CC 2400-1 crawler crane started off by picking up double element 1/2 directly from the assembly site at a working radius of 59 feet. The crane then proceeded to lift the element, which had a total length of 182 feet and weighed 303 tons together with the corresponding load-securing devices, to a height of 39 feet before safely putting it down on the piers.

During this operation, the crane operated at approximately 97 percent of its capacity. Meanwhile, the CC 2500-1 crane was responsible for bringing bridge element 3, which was 135 feet long and had a gross weight of 276 tons, to its installation position. A modular trailer was used to move the element forward from the assembly site, after which the crane picked it up at a working radius of 59 feet, lifted it and set it down at the intended position. In this case, the crane operated at 74 percent of capacity.

With this, the lifts planned for the day were completed as scheduled and the first half of the span — all the way to the center pier — was in place. “Afterwards we moved the cranes about a 328 feet forward so that they would be in place for the next day,” reports Huber.

When Sunday morning came, the team was prepared to carry out the remaining lifts. The CC 2400-1 crane lifted element 4 — which had a length of 72 feet, weighed 105 tons and required load-securing equipment weighing 22 tons at a working radius of 95 feet. Bridge elements 5/6, which were nearly 161 feet long and had a gross weight of 265 tons, were left to the CC 2500-1 crane, which used a working radius of 82 feet and operated at 83percent of capacity to safely put them in place.

Finally, the two crawler cranes left the 19-ton final element 7 to the assist crane, which completed the final lift perfectly on schedule. “When you have the right machines, a good team, and professional planning, even the most demanding projects become routine. Of course, you’re still relieved at the end when everything goes smoothly!” say Huber and Dudler, who were visibly happy with the results. 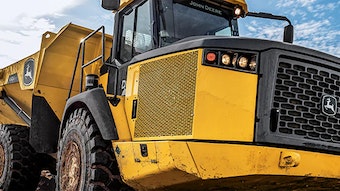