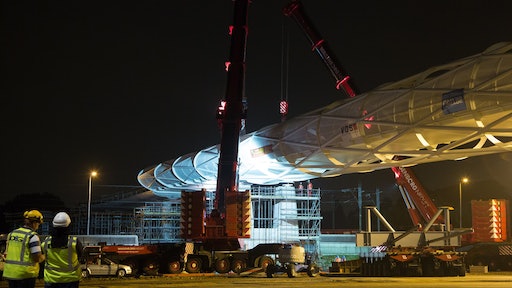 Three Terex cranes worked in tandem to lift two sections of a pedestrian bridge into place over the A15 motorway.

The De Netkous pedestrian and cyclists bridge connects the south of Rotterdam to a neighboring recreational area by crossing over the A15 motorway and a railway line. Dutch crane service provider Wagenborg Nedlift used a trio of Terex cranes to lift the almost 656-foot-long bridge into position.

"We opted to use the three Terex cranes on this project because they had precisely the capacities we needed to complete the two required lifts safely and reliably within the given time frame," explains Project Manager Jack Bienen of Wagenborg Nedlift, who was responsible for transporting and lifting the bridge. The latticed tubular bridge was transported to the site in two sections by self-propelled modular transporters (SPMTs). The larger section was 328 feet in length and weighed 771,617 pounds; the second, slightly smaller section measured 295 feet in length and weighed 716,502 pounds. As the motorway and the railway line had to be completely closed for the lift, the Wagenborg Nedlift team was allowed only two days to install the bridge.

Wagenborg’s team drove two AC 500-1 all terrain cranes to the site, each accompanied by three transport vehicles. The set up was quick, and within an hour the two AC 500-1 cranes were ready for work. Each had a 94-foot-long main boom, 352,739 pounds of counterweight and a 31.5-foot outrigger base. "We only needed two team members for this work," Bienen said. The company used 29 trucks to transport the Terex CC 2500-1 crawler crane. Four team members erected it in one day into its superlift configuration with a 157-foot main boom, 264,554 pounds of counterweight and 551,155 pounds of superlift counterweight.

The three Terex cranes were ready to lift both bridge sections up to the required height of around 66 feet to position them on their foundations. The CC 2500-1 crawler crane, equipped with a spreader, was positioned on one side of the construction sections and the two AC 500-1 all terrain cranes on the opposite side. The Terex trio hoisted the bridge sections, perfectly balanced, from the SPMTs in precisely coordinated lifts. "The CC 2500-1 operated at a working radius of 65 to 82 feet, which could be varied by adjusting the main boom. The work radius of the AC 500-1 was 52 feet," Bienen said. The operator of the CC 2500-1 crawler crane, Marcel Broeders, was faced with a particular challenge when executing the two lifts. Not only did he lift the sections and rotate them into position, but he also had to crawl under full load. With careful planning and execution, man and machine mastered this task with ease. The result? The bridge was erected within the tight timeframe and the motorway and railway line could be re-opened again on schedule.