Five Manitowoc crawler cranes have been working since 2011 for up to 24 hours a day building a liquefied natural gas (LNG) terminal in Dunkirk, France 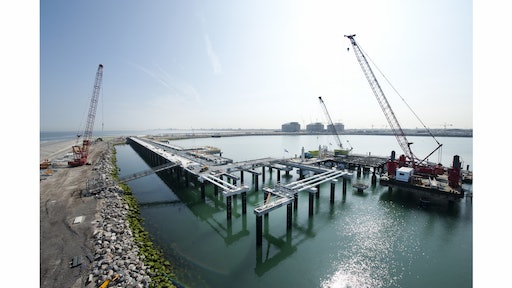 The Manitowoc crawler cranes built the terminal jetty, for which they primarily poured concrete using specially designed concrete buckets. They have been working double and triple shifts, often lifting continuously for days.

“Working on such an expansion project asks a lot of these cranes, plus the seafront location means they are battered by strong winds and challenging weather,” says Julian Agostini, business development director at Dutch crane specialist, Crane House . “But the Manitowoc crawlers haven’t let us down – they have been working continuously to a very high standard, and we are very impressed by their versatility and ease of use."

Most of the Manitowoc cranes work along the shoreline of the project but one was assembled on an off-shore platform, providing better lift capacity over the waterfront area of the project. While this third crane presented a more challenging assembly, a team of five engineers from Crane House assembled the three Manitowoc cranes in just three days.

Most recently, the Manitowoc crawler cranes built the terminal jetty, for which they primarily poured concrete using specially designed concrete buckets. They have been working double and triple shifts, often lifting continuously for days.

The LNG project, which is being delivered by a consortium led by Vinci, the world’s largest contractor, is due to complete at the end of 2015. Two Manitowoc crawler cranes remain working at the jobsite, which is among the largest construction sites under development in France.

The LNG terminal in Dunkirk will have the capacity to hold 13 billion cubic meters of gas – equivalent to 20 percent of France and Belgium’s annual natural gas consumption. Once complete, the site will consist of three LNG storage tanks, as well as marine structures and buildings providing connections to French and Belgian gas transmission networks.

Today's evolving jobsite needs call for smaller, more efficient trucks. Read more about Sage Oil Vac mobile lube trucks and what makes the Class 5 model, which does not require a CDL license, a good fit for most contractors.
April 6, 2021
Follow Us