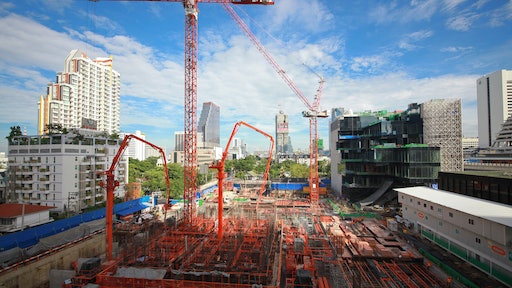 Early stage of the project with the 21LC290 (left) and the LCL310 (right). The MahaNakhon CUBE is the glass building on the right.
The challenge:
Building the MahaNakhon tower in Bangkok, which will be 1,030 feet and 77 floors
The players:
PACE Development Corporation Plc.
Bouygues-Thai
The process:
Two tower cranes from Spanish manufacturer Linden Comansa work in the construction of the MahaNakhon tower in Bangkok. This 1,030-foot-tall skyscraper, with 77 floors, is already the tallest building in Thailand, and from 2016 will house a hotel, a shopping area and the luxury apartments "The Ritz-Carlton Residences, Bangkok". When finished, the MahaNakhon tower will feature a "pixelated" facade.
MahaNakhon Development, by Thailand’s leading luxury developer, PACE Development Corporation Plc., is being built by Bouygues-Thai, and counts with the collaboration of two Linden Comansa tower cranes sold to Bouygues-Thai by Smart (1994) Co. Ltd., official distributor of Linden Comansa in Thailand, which also takes care of the service tasks of cranes on the site.
A luffing-jib LCL310 26-ton model has been located at the base of the tower since 2012. With maximum load of 26 tons and a freestanding height of 133 feet, its first duty was the construction of the MahaNakhon CUBE, a seven floor luxury retail center in the same area of the MahaNakhon tower which opened in 2014. Since then, its work consists of unloading all construction materials arriving to the jobsite, arranging and distributing them on the ground as well as lifting them up to the first floors of the tower. Thanks to its 197-foot-long luffing jib, its short counterjib and its high load capacity, the LCL310 works quickly and efficiently preparing all the materials on site that have to be lifted to the top of the building.
On top of the MahaNakhon tower stands a flat-top crane, model 21LC290, with 131-foot jib and maximum load of 20 tons. Initially, the crane was erected on fixing angles with a freestanding height of 199 feet. As the tower was gaining height, the 21LC290 was also getting higher thanks to Linden Comansa’s internal climbing system, which is tied to the structure of the building. This internal climbing system climbs the crane quickly and safely while maintaining two ties to the structure and saves economic costs as it only needs 11 mast sections, when a external crane would need more than 60 mast sections to reach the height of 1,115 feet.
Smart trained the Bouygues-Thai’s erectors team how to climb the 21LC290, by doing the first set of manoeuvres together. It took a total of 18 climbs to reach the maximum 1,115-foot height, climbing four floors each time.
To work with the greatest possible efficiency, the 21LC290 is equipped with a 110 kW rated hoist motor, which reaches speeds of up to 748 feet per minute, allowing high productivity and efficiency as the loads are moved very quickly. In addition, this engine has a high capacity cable drum (4,199 feet of rope) manufactured by Lebus, so that the crane can permanently work with double trolley and full capacity of 20 tons.
The 21LC290 crane started with the construction of the core structure of the MahaNakhon tower in September 2013 and completed it only 20 months later, in April 2015. This successful construction process was due to the good planning by Bouygues-Thai, the great collaboration between the service teams of Smart and Bouygues-Thai and certainly the great quality and performance of the Linden Comansa 21LC290 tower crane.
The LCL310 and 21LC290 cranes are still working tirelessly 16 hours a day, from 6 a.m. to 10 p.m. under the Bangkok Metropolitan Administration guidelines, to meet the demanding schedule of the project.
Latest in Crane