With only a 15-month construction time frame, a Terex Superlift 3800 crawler crane is helping lift and install preassembled beams and girders 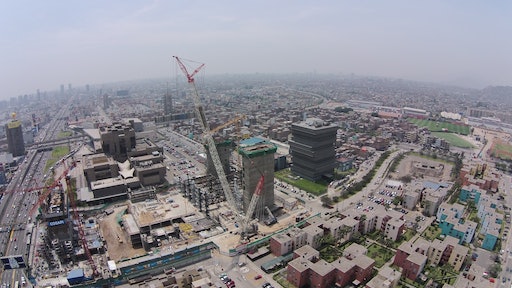 For the heavy lifting, the Terex 3800 was equipped with 315 ft. of main boom, a 39.4-ft. light fixed fly jib and Superlift structure to help boost lift capacities when working at maximum radius.

Construction work for the new Lima Convention Center is progressing full speed ahead at the San Borja District of Peru’s capital. The project, which represents an investment of $173 million and has a scheduled timeframe of only 15 months, will give rise to a building of tremendous size and significance. A project of this magnitude, of this tight timeframe requires a versatile crane to assist the trades with building the structure.

Lima-based heavy lifting contractor Grúas y Maniobras S.A.C. had the right crane for the job. “We went with the Terex Superlift 3800 lattice boom crawler crane for this project,” comments General Manager José Arturo Sánchez Torres. “It’s versatile and mobile, features cutting-edge technology and is designed to handle lifts quickly and with utmost precision, which is exactly what we needed for a demanding and complex project like this.”

The 716-ton Superlift 3800 crane, which Grúas y Maniobras recently acquired, is the model with the highest lifting capacity in the company’s fleet, as well as the largest crawler crane currently working in Peru’s capital.

In November 2014, Grúas y Maniobras prepared its Superlift 3800 crawler crane for the 15.5-mile journey from the company’s headquarters in the San Juan de Lurigancho District to the east side of Lima, where the future Convention Center will be located. Transporting the enormous crane, as well as its boom sections, counterweights and fixed jib took a total of 35 transportation vehicles — a relatively small number considering the equipment’s enormous size.

“The way the Superlift 3800 is designed makes it possible for users all over the world to get it ready to go quickly and efficiently, all thanks to how its smaller boom sections can be nested inside larger ones and to the fact that none of its components has a width of more than 9.8 feet,” comments Ferreyros representative Carlos Ojeda. “Once at a work site, features such as its quick-connection system make it possible to install and remove the superstructure in less than 15 minutes, speeding up the unit’s setup.”

The components’ relatively narrow transportation width proved to be an enormous advantage for the project: “We set up the crane in a residential area right in the middle of the city, which meant there was very little space to maneuver in when getting the machine to the site,” explains Sánchez. “However, the crane’s design made getting to the site and setting up the machine there extremely easy.”

Once the crane components made it to the convention center construction site, Grúas y Maniobras’ crew of 12 had the Superlift 3800 crane assembled and ready for work in only four days.

Among the lifting equipment at the project site, the Terex Superlift 3800 crawler crane dominated the landscape as it towered over all the other cranes.

For the heavy lifting, it was equipped with 315 feet of main boom, a 39.4-foot light fixed fly jib and Superlift structure to help boost lift capacities when working at maximum radius. Full counterweight of 182 tons was positioned on the variable-position Superlift tray and another 55 tons was placed on the super structure.

Grúas y Maniobras used the crawler crane to lift and install the building’s preassembled beams and girders. "The segments weighed up to 44 tons each, and we worked the crane at a maximum radius of 295 feet and a height reaching 125 to 131 feet," mentions Torres. This was well within the Superlift 3800 crane's capacity of 64 tonswhen working at this radius.

Operating a crane of this size in a residential area can be challenging, but the crew and Superlift 3800 crawler crane were up to the task. The obstacles in the way of the lifts included banks, a government building, and heavy vehicle and pedestrian traffic. “However, the crane features extremely precise controls and is easy to operate and maneuver, so performing the actual lifts ended up being quite easy,” Sánchez adds.

Depending on the phase of construction, crews performed an average of 12 heavy hoists every day with the crawler crane. Working on a large structure spanning more than 8.5 hectares made it necessary to move the crane a number of times, but, according to Sánchez, the fact that they were able to use the crane with a very large radius made a significant contribution to the lifting operations’ efficiency. “Thanks to the Superlift 3800’s capacity, we needed to move it fewer times, and the time saved as a result meant we were able to cut down on man-hours and other costs,” he continues.

The crane’s ability to move by itself using its crawler system was another point in its favor when it came to the project’s requirements. This is reflected in the fact that the crane has moved the equivalent of a total linear distance of 1.86 miles since its arrival at the construction site.