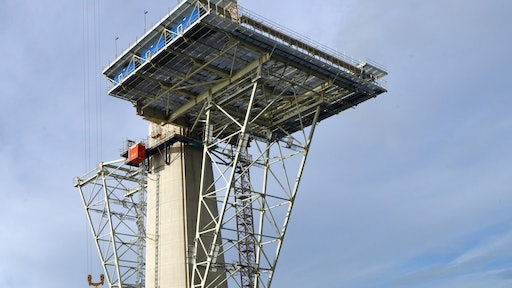 The 630 EC-H 40 Litronic cranes are stationary, mounted on a 10-meter 630 EC H undercarriage. In total, just five guying systems on the pylons are needed to reach their 212-meter hook height.

The Firth of Forth in Edinburgh is an estuary on the east coast of Scotland, and also the mouth of the River Forth to the North Sea. The current Forth Road Bridge (FRB) extending across it was built in 1964 to handle 4 million vehicles per year. It currently handles more than 24 million.

The new bridge, known as Queensferry Crossing, is under construction alongside the existing FRB, and will safeguard the cross-Forth M90 motorway corridor. It will serve as a main transport artery between Edinburgh and the northern regions of Scotland.

Construction of the bridge and connecting roads is expected to be completed in 2016. Following completion, the 2.7-km-long bridge will be the world’s second longest cable stayed bridge, with three towers each extending up to 210 meters (683 ft.) above high tide.

Conventional construction methods (excavation, blinding concrete, shutter and reinforced concrete) were used to construct the three land-based pier foundations – two on the southern viaduct and one on the northern viaduct. A total of 10 piers support the two approach viaducts connecting the bridge to the wider road network.

The bridge’s Central Tower was positioned on Beamer Rock, a rock outcrop situated roughly in mid-estuary. The rock was blasted and ground down to make it level in order to accommodate a temporary sheetpiled cofferdam. This enabled the Central Tower to be built in dry conditions. Five further coffer-dams were deployed on the seabed to enable the foundations of the south approach viaduct piers to be constructed in dry conditions. One cofferdam is also deployed on the north approach viaduct.

Three double-skinned steel caissons (the largest up to 1,200 tonnes in weight, 30 meters in height and 30 meters in diameter) were sunk into the seabed and filled with concrete to form the foundation bases for the North and South Towers and the largest pier supporting the southern approach viaduct. Temporary single-skinned caissons were attached on top of the permanent caissons to keep the structure above sea level, which allows the removal of water and the subsequent construction of the tower bases in dry conditions within the caissons.

Construction of each hollow cross-section, reinforced concrete tower requires the use of 4-meter climbing formwork to mold the shape, with concrete poured around the steel reinforcement in the mold to form the structures. Formwork is stripped and re-erected once the concrete gains sufficient strength to be self-supporting. This process is being repeated 54 times to build the towers to full height.

A particular challenge in the Queensferry Crossing project is the capacity required to handle the 30,000 tonnes of steel required for the bridge structure. To help facilitate the necessary lifts, three Liebherr 630 EC-H 40 Litronic tower cranes are being used on the project, positioned on the steel caissons used for the foundation of the tower structures.

The 630 EC-H 40 Litronic top-slewing cranes has proven ideal for such applications. The cranes are equipped with a 36-meter jib and lift up to 180 tons at the jib head. At a radius of up to 18 meters, the cranes are designed for a 40-ton capacity. This configuration enables a particularly high handling capacity with heavy loads. This lifting capacity is also supported by the 110-kW high-performance Liebherr hoist gears in use on the project, which enable fast lifting speeds.

To adapt to the high wind speeds resulting from the open North Sea location, the cranes are specified according to wind zone “D 25” and configured with a stable 500 HC tower system. The cranes are stationary, mounted on a 10-meter 630 EC H undercarriage. In total, just five guying systems on the py-lons are needed to reach their 212-meter hook height.

The special guying systems were manufactured by the customer on the basis of designs and structural calculations provided by Liebherr. The construction process-synchronised climbing procedure of the three 630 EC-H 40 Litronic tower cranes takes place via their own climbing equipment. Each crane reaches a total height of 235 meters.

Other products from three Liebherr divisions have also been used extensively during the life of the project. Since its start in November 2011, 12 different types of Liebherr mobile telescopic and lattice boom cranes have been deployed.

Operated by Ainscough Crane Hire Ltd., cranes ranging in size from 40 to 500 tonnes have been used to lift components needed to construct the bridge. On average, there are eight telescopic cranes on site each day, and in total there have been over 5,500 hire (rental) days.

At least one model of almost every telescopic crane that Liebherr manufactures has been used in the project. Smaller cranes are used for handling rebar, placing shuttering and carrying out general construction lifts. The larger cranes are called in to lift bridge deck segments and precast sections.

Work continues on the installation of individual bridge deck segments and the stay cables that will hold them in place. The first four deck segments on each tower are installed and are now connected to the towers and supported by temporary “falsework” trestles. The first of the trestles at the North Tower was removed in late August, as the first stay cables were able to hold the weight of the deck.

Starting in September, additional deck segments began to be lifted into place. This lifting process - involving 16.2-meter deck segments weighing up to 780 tonnes - will continue throughout much of 2016. Upon installation of all 110 deck segments, the stay cables will be adjusted to achieve the geometry required by the design of the new bridge.

Once completed, the 2,633-meter bridge will feature a 210-meter-high Central Tower and three “fans” consisting of 650-meter spans. Each fan will weigh 60,000 tons – the heaviest of any cable stayed bridge in the world - with the weight transferred through the towers to the gravity foundation below.