The Liebherr 710 HC-L luffing crane will place 7,357 tons of reinforcing steel and 48,850 cubic yards of concrete for the Midtown Manhattan luxury apartment building 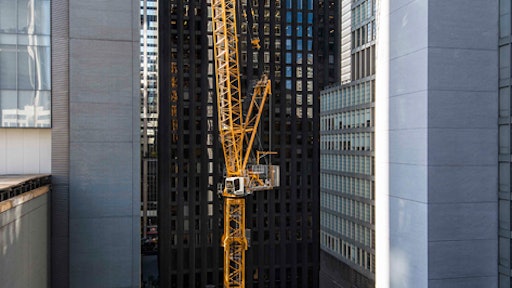 Build the 76-story, 1.050 MoMA Tower in Midtown Manhattan — one of the city's highest buildings

The first Liebherr luffing crane 710 HC-L 32/64 Litronic has been erected on the MoMA Tower jobsite in New York City. Together with a second 710 HC‑L, that will be delivered mid 2016, the two tower cranes will help to build the 76-story building in Midtown Manhattan. With a height of 1,050 feet, the skyscraper will be one of the highest buildings in the city. Both cranes are leased from the North American Liebherr dealer Morrow to the contractor Sorbara Construction, Lynbrook, New York.

Located at 53 W 53rd Street, the MoMA Tower will stand 76 stories at 1,050 feet tall and house 139 luxury apartments. The 710 HC-L will be integral in the construction of the tower, helping place 7,357 tons of reinforcing steel and 48,850 cubic yards of concrete. When completed, MoMA Tower will bring 676,000 gross square feet of mixed-use space to downtown Manhattan.

MoMA Tower is one of New York's most anticipated building projects this decade, with its innovative design, structural features and location. World-renowned architect Jean Novel's design will be a masterpiece that integrates with the Museum of Modern Art located next door.

Sorbara was looking for a high-capacity tower crane that featured fast load cycles, a low external profile and clean operation. The company leased two 710 HC‑L luffing jib cranes from Morrow's New York District. The first crane was erected within 17 hours of delivery to the jobsite keeping Sorbara on schedule and under budget for this phase of the project. This crane will have a 148-foot working radius and will climb to 430 feet.

“We are impressed with the Liebherr 710 HC-L. We are very confident that the combination of Morrow Equipment and Liebherr along with the 710 HC-L will help us complete this prestigious project on time," says William Kell, Sorbara chief estimator.