The Grove GMK5250L all-terrain crane was used to create a machinery warehouse's roof at a mining facility in the Peruvian Andes by lifting roof segments over massive oil tanks. 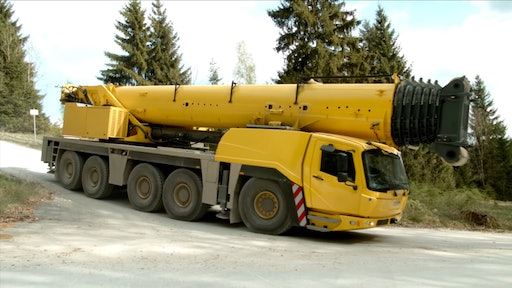 A Grove GMK5250L all-terrain crane, configured with 300 feet of boom, lifted and placed metal structures that together will form the roof of a machinery warehouse at a mining facility in the Peruvian Andes.

Given the constricted workspace at the site, the 250-ton-capacity mobile crane was the ideal solution for the job, as other vehicles needed to use the same road in which the crane was positioned. It was imperative the Grove crane could move out of the way on relatively short notice, so that operations at the facility could continue without interruption.

“Our approach was for the team to be able to leave the work area when refinery vehicles needed to use the same access lane where the GMK5250L would be positioned,” said Carlos Villacorta Canessa, general manager at ETAC Peru, which supplied the crane for the project. “The work had to be carefully planned and executed, given we needed to account for the time it took to assemble and dismantle the crane. The GMK5250L performed flawlessly, and we were able to complete the job exactly as planned.”

Another challenge the crane helped operators overcome was moving the roof segments — some weighting up to 1.2 tons — over massive oil tanks at the site, lifting and placing the parts over a 210-foot radius. The operation was possible thanks to the GMK5250L’s 50 degree jib offset, compared to the usual 40 degrees, which helps the crane reach further over obstacles.

Similarly, the crane’s compact build allowed it to work at the confined jobsite with relative ease. The GMK5250L boasts 45 feet of chassis length, 25.6 feet of maximum outrigger width and five outrigger positions. It was configured with a 230-foot main boom and a 70-foot swingaway jib, totaling 300 feet.

The crane’s Megatrak suspension system is regarded as the best off-road driveline available, enabling the GMK5250L to perform as a true all-terrain crane. The independent suspension and all-wheel steer system means the wheels always remain on the ground and prevents stresses and weight from continually transferring between axles. Megatrak provides true ground clearance up to 2 feet where others just raise the chassis.

Additionally, the Grove GMK5250L is the only all-terrain crane in its class to feature the VIAB turbo retarder clutch module typically found in heavy-duty trucks. It enables wear-free starting and braking, avoids clutch overheating and burning, and reduces fuel consumption to a minimum.

ETAC Peru’s GMK5250L worked at the site for about a month without issues or downtime, from early May to early June.

ETAC is a longtime Grove and Potain partner in Peru. The company has been instrumental in helping expand Potain’s presence in South America as it services clients in Peru, Colombia, and Chile. The Lima, Peru-based business is a well-known leader that deploys a professional technical team across the country to ensure that cranes and parts are readily available for sales and rentals.