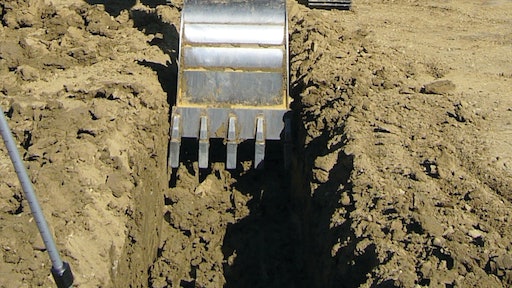 Digging a trench using a hydraulic excavator may seem like a pretty straightforward task. However, it requires a level of training and skill to maximize productivity, efficiency and safety for both the machine and the operator.

"I've been an instructor for years and everyone is always so interested in just getting in there and starting to dig," says Chris Cannon, a training manager with VISTA Training. "Sometimes I have to stop and back them up a little bit."

Cannon likens excavator operator training to learning how to play golf. In golf, there are typically two schools of thought. "One is where you hit the ball as hard as you can and just learn by trial and error," he notes. "Then there's the Arnold Palmer School of training, where you learn to set up and a lot happens before you hit the ball. The same applies to operator training."

Perhaps the most critical step operators need to learn is to take time for proper setup. “One of the first steps that's required – and it sounds so basic, but it's so important that people overlook it – is you have to set up the job correctly and take the time to make some offset marks , whether that be offset stakes, a chalk line, a stringline… some form of guide," says Cannon. "It’s impossible to dig a straight line unless you have a reference point. Then take the time to align the front and back of the machine to the line you’re referencing so that you’re tracking straight.”

Next, take time to visualize how the job will progress to avoid "boxing" the machine in between obstacles or the spoils pile, or limiting your reach. "One of the signs of a new operator is they don't plan to have the machine positioned properly when they're digging. They dig wide and they don't realize they can't reach the back of their trench anymore," says Cannon.

Also ensure the excavator remains level at all times. "You can't dig a level trench unless the machine is absolutely level," says Cannon." You have to take the earth and pack it under one of the tracks to get to that point."

Some operators will use a torpedo level taped inside the cab. A better option is to use a grade laser or other form of grade control system. "When you use this type of system, it's important to make sure you calibrate it with the position of the bucket," Cannon says.

An emphasis on safety is essential when trenching. The biggest potential hazard of working over the edge of a hole is the risk of cave-ins. "This is a risk not only to the people inside of the trench but to the machine and the operator, as well," says Cannon. Make sure you know the type of soil on which the excavator is resting, and ensure the machine is positioned far enough back to support its weight.

Maintain awareness of people and objects around the machine at all times. "When you're in an excavator, you have a huge blind spot," Cannon points out. "If you have a machine that has a counterweight that extends past the length of the track, you have a large working radius that you have to observe. It only takes one time to have a career-ending or life-threatening accident."

Also pay close attention to the direction of travel. An excavator allows the upper housing to be rotated 360 degrees. However, the undercarriage tracks in the same direction, regardless of which way the operator is facing.

"Once you rotate the cab 180 degrees, if you push the controls forward, it's going to actually track backward as far as the operator goes. It's important to keep that in mind," says Cannon. "Some guys get so focused on what they're doing… they will actually track right off the edge of the embankment because they're not thinking about the orientation of the tracks."