Caterpillar and Komatsu hold spots atop the world's largest equipment makers but Volvo, Terex, John Deere, Sany and Zoomlion have climbed among the Top 10 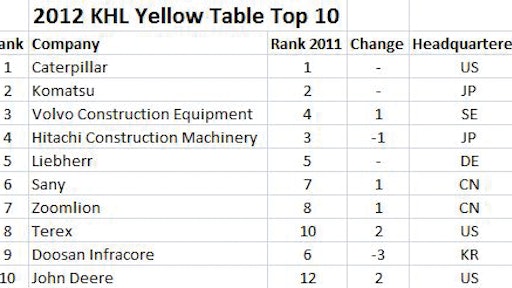 KHL bases Yellow Table rankings on revenues from construction equipment sales (in this case, from 2011) in U.S. dollars.

Sales of construction equipment by the world's 50 largest manufacturers grew 25 percent last year to set a record for the industry. Construction equipment sales in 2011 reached $182 billion, surpassing the previous high of $168 billion set in 2008, prior to the global financial crisis, according to the annual Yellow Table survey by KHL Group.

The Yellow Table, which is a ranking of the world's 50 largest construction equipment manufacturers, saw relatively few changes at the top of the table, with the industry's long-standing number one and number two, U.S.-based Caterpillar and Japan's Komatsu, continuing to hold the positions they have had for well over a decade.

Climbers inside the Top 10 include Sweden's Volvo Construction Equipment, U.S.-based Terex and John Deere, and China's Sany and Zoomlion. These gains came at the expense of Hitachi Construction Machinery (although its revenues were within 0.5 percent of Volvo, the company directly above it) and South Korean Doosan Infracore. China-based XCMG fell out of the top 10, having sat in tenth place for two years.

China's construction equipment manufacturers have seen their share of the top 50's revenues climb for six consecutive years. Over the last decade, their share has increased more than ten-fold in percentage terms. In 2003, the first year the yellow table was published, China's manufacturers had a share of just 1.6 percent, worth just $841 million. Today their 16 percent share is worth $30.6 billion.

The report's author, Chris Sleight, said, "A rebound in the European, North American and Japanese construction markets was the key driver last year. There was also growth for some of China's larger players, but they faced the first significant headwinds for more than a decade as the country's stimulus spending programs came to an end. Over the next 12 months the continued recovery in North America is likely to be decisive for the 2013 Yellow Table."

Rankings based on revenues from construction equipment sales in U.S. dollars in 2011.

The Yellow Table is available to buy from KHL's information store, www.khl.com/information-store, either as a report on single years, or as a multi-annual study.