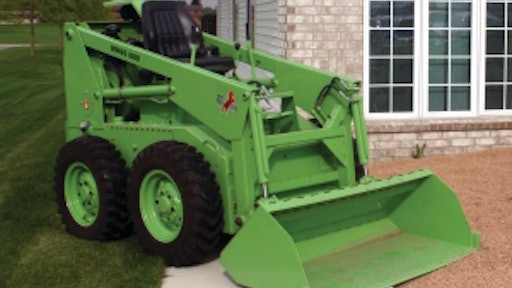 Mustang receives dozens of calls for replacement skid-steer loader parts from its dealers everyday. But this one was different. The drive belt the customer was seeking hadn't been used on a Mustang skid-steer loader in more than 40 years.

That's because the caller - Joe Gross of J. Gross Equipment in Aberdeen, S.D. - was looking to fix a 1965 Mustang skid-steer loader for his farming customer. Not only was the unit more than 40-years-old and still in good working condition, it was No. 18 of the original 25 units off the Mustang production line.

Following production of the first 25 units, Mustang - then known as Owatonna Manufacturing Company - put the unit through a compete redesign. The drive system was re-engineered in the process and this particular drive belt was eliminated.

The unit, now with its third owner, still had the original decals, seat and even tires. It had logged just 339.6 hours in its lifetime. The hour meter is original and still works. Further evidence of its low usage time is the pins, bushings and other wear points that are in like new condition.

After hearing of the original skid-steer's existence, Mustang employees pooled their money to buy the machine. Moved by the company's passion for the machine, Mustang General Manager Randy Vargason made the deal on the company's dime, refusing the employees' donations.

After purchasing the skid-steer in May, the company spent three months having it repainted and installing new tires. Other than paint, decals, tires, seat and a few hoses that had deteriorated from age there was no other restoration needed. The unit is currently on display at the Owatonna Village of Yesteryear.

The skid-steer was among the first manufactured in the United States. In fact, the machine was built long before the terminology "Skid-Steer" was even developed. The unit was marketed as a "self-propelled four-wheel drive unit," and was recognized by its lime green and red color scheme.

The first units were designated as the Owatonna Mustang Series 1000 - a name that was derived from the company's hometown and original name, Owatonna Manufacturing Company.

Since 1965, Mustang has designed, manufactured and sold more than 40 different models of Mustang skid-steer loaders throughout the world.