Case lines up new skid steers with customer needs, rather than size classes 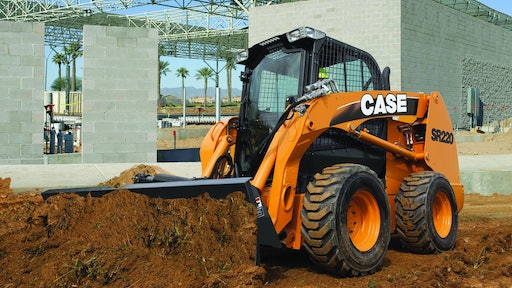 The units were developed to target market segments rather than fit rated capacity ranges, so new models don’t necessarily line up with the units they are replacing.

The small chassis includes the SR130 and SR150.

“The SR 130 is a 1,300-lb. machine that is brand new to us,” Goettel said. The previous Series did not extend down to this size class. “It targets the need for a small ag/rental machine. It is just a good utility machine.”

To keep price in line with the targeted markets, the standard hydraulic controls on the small-chassis machines are manual. “It means a little more effort, but it also means a little more feel,” Goettel said. “So when you are running into a a pile you don’t tend to kill the engine because you can feel it pushing back at you.”

Electro-hydraulic controls are an option throughout the Alpha Series.

The SR175, SV185 and SR200 make up the mid-size frame machines. These essentially replace the previous 420/430, which were the company’s best-selling models.

“We didn’t replace the 420 with the 175, we replaced the 420 with three models,” Goettel said. “If an owner/operator wants the big engine, wants servo assist and doesn’t mind spending the extra money to get all of the bells and whistles, he should look at the SR200, and he gets more operating capacity too. If he has a fleet and he is not as concerned about the creature comforts as the price, now we have something new to offer. It has just as much power and just as much performance, but at a different price point.”

Finally, there are the large-frame units – SR220, SR250, SV250, SV300, and the TR270 and TR320 and TV380 compact track loaders. Case looked at sale rates for options on these size machines over the last five years and made the most popular options standard features.

Wheelbase on all of the Alpha Series has been extended. Added stability of what Case calls the Power Stance should translate into the ability to lift and haul more material. A front/rear weight distribution of 30/70 and the longer wheelbase reduce the amount the center of gravity moves when loader arms are raised.

“We have increased the lift height on every unit,” Goettel said. “On the radial side it went up by 3 or 4 in., depending upon the model.”

The compact track loaders' dozer-style undercarriage remains a key feature. Case points out that it is made up of fewer moving parts than a competitive suspended-track system.

Alpha-Series cabs are 25% larger and increased glass surface and ultra-narrow wire screen improve the operator's 360-degree view of the work site. A new heating and air conditioning system relocates the air conditioning gear from the roof of the cab.

With larger fuel tanks -- ranging from 16 to 25.5 gal. -- and increased fuel efficiency, Case says the Alpha Series can now easily run eight to 10 hours between refueling.

“Our hard-core customer has always been the heavy-construction guy. That is one of the reasons we are a predominantly radial company (Case emphasizes radial-lift-path skid steers),” Goettel said. “A radial machine performs much better in those applications. As a function of being a radial machine, they almost always will have more horsepower. So our SR250 will be the beast of the industry.”

With the Alpha Series Case aims to simplify identification of its skid-steer loaders and compact track loaders. For instance, let’s look at the SR130, SV185 and TR270.

The first letter signifies either a skid steer (S) or a compact track loader (T). The second letter indicates whether the machine is radial (R) or vertical lift (V). The number following the letters is the first three numbers of the rated operating capacity.

Go to www.caserodeoseries.com to learn about a national Case equipment rodeo. The winner goes away with a new Case compact track loader and Ram pickup truck.