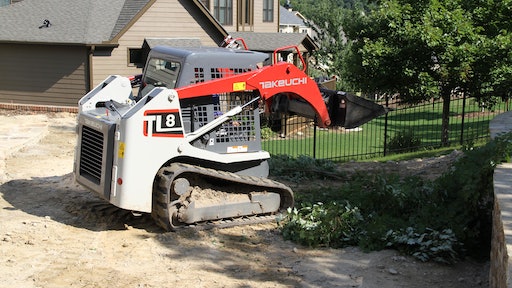 Weighing just over 8,000 lbs. with a tipping load of 6,000 lbs., the TL8 provides the power and maneuverability Sugar Hill Outdoors needs for its residential and commercial landscaping projects.

When it comes to landscaping, there isn’t much that Sugar Hill Outdoors can’t do. Its experienced and skilled team handles both residential and commercial hardscape and landscape installation, enabling the Lawrenceville, GA-based design/build outdoor construction company to offer customers a myriad of services to help transform their yards and facilities into works of art.

Sugar Hill Outdoors has been operating for over 16 years after opening in 1998. Initially serving customers throughout Georgia, word quickly spread throughout the south about the budding landscaping and design architects, and it is now also serving parts of North Carolina, South Carolina and Alabama.

The services Sugar Hill Outdoors offers extend from landscaping for outdoor entertainment areas to hardscaping for retaining walls, pavers, driveways, porches and decks. In addition, it does tree care and water features for building waterfalls, ponds, fountains and aquascapes. Other areas the company covers include irrigation for sprinkler systems, erosion prevention and commercial landscaping for new development and master planning.

In its first year, Sugar Hill Outdoors rented equipment to get a better sense of it before buying. After renting and having success with a compact track loader, it decided to purchase one the following year. Currently, the company is armed with both a Takeuchi TL130 and a new TL8 track loader.

“We purchased our first Takeuchi back in 1999, and compared to any other compact machine, it flat out blows other [units] away,” says Clint Tucker, owner and founder of Sugar Hill Outdoors. “We do quite a few modular block retaining walls and the TL8 is great at moving those modular blocks around and in building those walls for us.”

Released earlier this year, the 74.3-hp TL8 is designed and engineered to provide the power, strength and maneuverability required for tight spaces and corners such as those encountered on Sugar Hill’s projects. Weighing just over 8,000 lbs. with a tipping load of 6,000 lbs., it delivers bucket breakout forces exceeding 6,800 lbs. and loader lift arm forces of more than 6,700 lbs. Double reduction planetary drives provide traction forces of 9,100+ lbs.

One residential project the company started in July required the TL8 to help build a wall. The scope of work called for the crew to tear off the existing deck of the customers’ house and regrade and pad out an area for a concrete patio. The crew needed to cut into the existing slope to allow the loader to assist in building a modular block retaining wall before they performed the final grade in landscaping. Using their expertise and the machines in their lineup, the crew made light work of the job, finishing at the end of July.

Check out the Profit Matters channel. There is how-to information, articles and more to squeeze the most profit from your projects and improve your bottom line.
July 30, 2021
Follow Us