Winner Steven Klumker of Colorado was selected from more than 12,000 entries received over the six month contest period 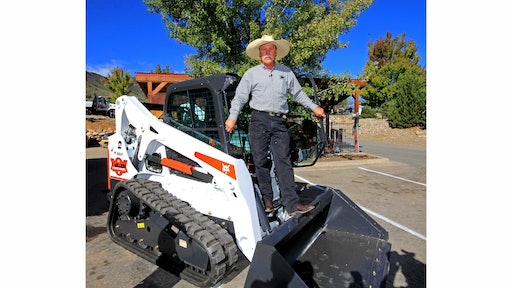 A second-generation Bobcat compact equipment owner received the surprise of his life when he was honored with a Special Edition One-Millionth Bobcat T650 compact track loader during Bobcat Company’s “Unstoppable” campaign and Million Loaders Celebration contest. Steven Klumker, of Mancos, Colo., visited the Bobcat of Durango equipment dealership thinking he was being interviewed as a finalist for the contest. Instead, he was handed over the grand prize with his family on hand to celebrate with him.

Klumker’s entry was selected from more than 12,000 that came in over six months, based on his answer to the question, “How does Bobcat make you unstoppable?”

“Steve’s was exactly the type of entry we were looking for,” said Gary Hornbacher, Bobcat Company vice president of sales and marketing. “He described how Bobcat equipment has helped his entire family — first- and second-generation Bobcat equipment owners — build a successful business that spans more than 40 years and has covered six states. He and his family were early believers in Bobcat machines, and Steve is a great example of how a customer can be unstoppable with the right equipment and a solid relationship with his local dealer.”

Klumker has used a variety of Bobcat skid-steer loaders, compact track loaders, compact excavators and attachments in countless applications, from a $300 million desert resort and golf club to a 36-year-long, five-phase housing development project. His work has included building lagoons and swimming pools, backfilling utility trenches and landscaping and tree planting across California, Nevada, Arizona, Colorado, Utah and New Mexico. For more than 40 years, the Klumkers have been customers of Bobcat of Durango, in Durango, Colorado, and Bingham Equipment in Arizona.

The contest’s second prize went to Troy Hieb, of Newcastle, Wy., who will receive $1,000 in merchandise credit to spend at any authorized Bobcat dealer location.

Hieb, a lieutenant with the Newcastle Volunteer Fire Department, currently owns a Bobcat T180 compact track loader, which — most notably — was used to help move debris during a home fire.

“The use of my Bobcat T180 allowed the Newcastle Volunteer Fire Department to safely, quickly and fully extinguish a fire that could have caused far more damage to the home if not completely extinguished,” Hieb wrote in his entry. “Bobcat has built a tool that has made me unstoppable.”

The “Unstoppable” campaign started in January, marking Bobcat Company’s yearlong celebration of the production of its one-millionth loader. Contest entrants were judged on individual completeness and creativity.

SmartGrade integrated on the 333G is a first for compact equipment, and three-way power/angle/tilt attachment for the biggest CTL is the first purpose-fit dozer for Deere CTLs
John Deere
March 16, 2020