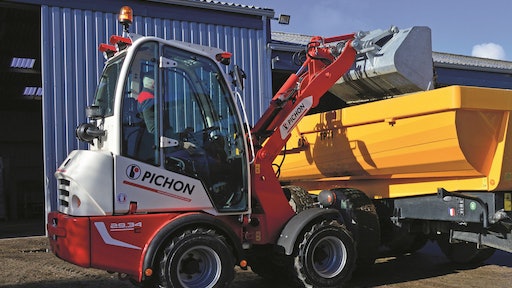 The MECALAC Group, specialists in design, manufacture and distribution of construction equipment and based in Annecy, Haute-Savoie (France), will take over production of a range of compact wheel loaders currently being manufactured by the French company PICHON, starting on January 1st, 2019.

The PICHON company, which specializes in the design and manufacture of agricultural equipment and is based at Landivisiau in Brittany (France), will cease production of that range of machines in order to concentrate on its core business of agricultural machines dedicated for the transport and spreading of liquid and solid materials.

At the same time, the MECALAC Group and the PICHON company have reached an agreement under which the wheel loaders will be distributed in the color and under the brand name of PICHON, allowing PICHON to maintain its business in the agriculture sector.

Henri Marchetta and Alexandre Marchetta, respectively President and CEO of the MECALAC, Group as well as Philippe Pichon and Michel Pichon, respectively President and Founder of the PICHON company, are very pleased with the agreement, which allows the PICHON company to continue its development in the agriculture sector with a technically upgraded range of machines while also allowing the MECALAC Group to expand its product offer.  With this addition, MECALAC becomes one of the largest suppliers of compact wheel loaders in the market.

Four loader models incorporate a 180° swivel arm that pivots instead of requiring repositioning of the machine
Mecalac North America
March 19, 2020

Compact Wheel Loaders Emerge as a Favorite on Jobsites

Bobcat to Bring Small Articulated Loaders to Market in Early 2020

All models can lift and handle heavy loads for their size for enhanced lifting capacity
Bobcat Co.
October 21, 2019

CASE has made it easier than ever to dial in compact wheel loader performance with all-new electro-hydraulic controls that allow operators to dial in boom and bucket speeds independently to match the demands of the job.
Case Construction Equipment - CNH
September 18, 2019

Even experienced wheel loader operators can benefit from these tips to extend wheel loader life and performance
Becky Schultz
September 13, 2019