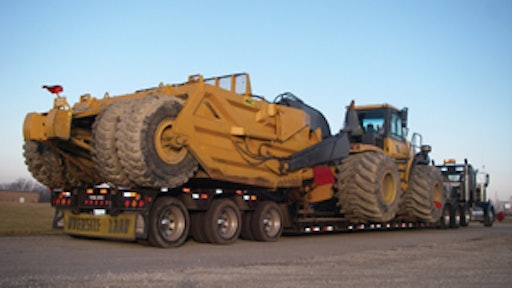 Over the past four or five years, the contractor has also worked with Martin Equipment of Illinois, Inc.to lease six to eight 413-hp Bell Equipment 4206D-T construction scraper tractors with ATI self-tensioning modular tracks. These units are mated to scraper pans capable of self loading up to 31 yds. (struck), or top or push loading up to 38 yds. (heaped).

The only problem the contractor has encountered with the systems relates to distribution of the load weight. "We had a lot of weight at the very rear of the machine with that pan strapped right on the tongue," Ziller says. This has proven hard on the track systems.

So when Mark Klein at Martin Equipment came up with a possible solution, Bell Land Improvement jumped at the chance to test it out. Ziller and his colleagues weren't disappointed in the results.

Putting it to the test
Martin Equipment is the largest Bell Equipment scraper tractor dealer in the world, so Klein has plenty of experience with the tractor-scraper systems. He worked directly with Bell Equipment North America to develop a prototype setup consisting of a 4206D with 50-in. log skidder tires (to maximize traction and flotation) pulling a 31-yd. MAKCO pan scraper with a gooseneck hitch.

The goal of this unique setup was to create a 50-50 weight distribution between the front and rear axles when the pan is fully loaded. "In doing so, we would maintain maximum tractive effort when loading the pan and when climbing a stockpile," says George Adams, dealer sales representative, Bell Equipment North America. "In addition, we eliminate the continuous bouncing that occurs when hauling if you hit a bump."

Bell Land Improvement spent roughly a week demoing the system at a golf course and subdivision project on the outskirts of Elgin. Tests were run to prove the system could climb a 55-ft.-tall 3:1 slope stockpile when fully loaded. "We did it for two days with no wheel spinning," says Adams.

Further tests were run to compare the loading and hauling performance against the Bell tracked systems already in use at the site. The gooseneck tractor-scraper system was able to load quicker and haul faster than its tracked counterparts.

Ease of movement
Another advantage of the gooseneck arrangement is added agility.

A drawback of traditional tractor-scraper systems has always been length - a tractor-scraper combination typically requires a large turning radius. This drawback is virtually eliminated with the gooseneck setup. Close coupling of the gooseneck to the tractor not only shortens the length of the system, it dramatically reduces the turning radius required. The tighter turning circle provides the ability to turn around 360° in a subdivision street.

This maneuverability is especially important on housing development projects. "In our subdivisions, there are quite a few stakes on the job, and stepped pads (house pads)," Ziller notes. "Being able to move around there and turn a lot tighter definitely helps."

During testing, the gooseneck tractor-scraper system was able to dump in a 90° turn and stay within 12 in. of the grading stakes, Adams points out. "The lifts are also very smooth," he adds.

Because there is minimal bouncing, the system is also able to achieve higher haul speeds, even when fully loaded. Haul speed is now 20 to 25 mph, since the system is no longer required to slow down for bumps in the haul road.

A further benefit of the system is reduced transport costs. Because of its shorter length, the system can be hauled on a single lowboy. "It can actually be moved in one piece," says Ziller. "Rather than two lowboy moves, we got it down to one."

Once on site, it can be driven off the trailer as a system and is ready to operate in five minutes.

After a week of testing, Ziller and his cohorts were already starting to explore other possibilities for the gooseneck configuration, including mating it to the track-equipped scraper tractors.

"With the pans set up the way they are now, it's a lot of weight on the tongue on the very rear of that tractor. Consequently, we have had some problems with the rear tracks," Ziller comments. "If we can put that gooseneck setup on a track machine, we're thinking we can eliminate a lot of that problem."