Suppliers are including features in today's excavators designed to enhance performance and reduce operating costs. 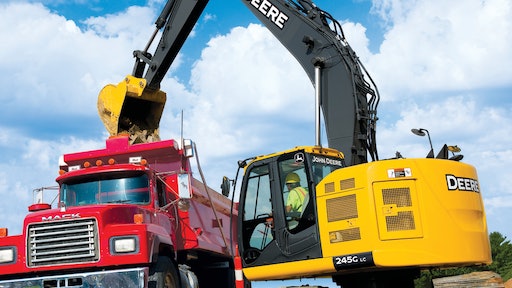 John Deere employs an engine, hydraulic management system that controls the excavator's functions and operations. It keeps equipment operating at optimum performance regardless of the application.

An excavator operator 20 years ago might have put little thought into how much fuel a machine was burning or if it was delivering optimum performance. There was a job to do and it usually had to get done as quickly as possible.

The landscape has changed. Fuel cost has gone up dramatically over the last couple decades, as has the cost of equipment, thanks in part to the evolution of low-emissions engine technology.

Yet, even as implementation of this technology has contributed to higher acquisition costs and potentially higher ownership costs, operating costs are actually lower in some instances due to better fuel economy and more efficient systems. Just how owners and operators are able to reap these important benefits varies from manufacturer to manufacturer.

“As with any change in regulations, the spotlight has been focused on the new systems used to meet emissions regulations,” says Ken Gray, Caterpillar global excavator product manager. “Although the operation of the technology Caterpillar is using to meet the Tier 4 Interim requirement is completely transparent to the operator, the real story is the number of valuable changes the Cat E series excavators incorporate.”

The improvements, he notes, are designed to reduce operating costs and maximize value to customers. Among them are a more powerful engine that consumes less fuel, a redesigned hydraulic system that greatly increases machine efficiency, a redesigned operator environment focused on operator safety and comfort and improved ground level serviceability.

The company also uses Variable Speed Matching technology that regulates engine speed and power to optimize hydraulic flow. “This system is canceled when full power is required by the operator. This saves fuel for low to high duty cycle applications,” Boebel points out.

John Deere is also striving to make new emissions standards as seamless as possible, says Mark Wall, excavator product market manager. “For our customers, we want emissions to be a non-event,” he states. “The same goes for other new technologies built into the excavators.”

The company has accomplished this goal in part by employing an engine, hydraulic management system to control an excavator’s functions and operations. “The system does the thinking for the operator,” says Wall. “It keeps equipment operating at optimum performance no matter what the application is.

Both John Deere and Caterpillar take transparency all the way from emissions to the excavator’s overall operation. Neither OEM incorporates work modes into their machines. Instead, they use only power modes that allow operators to match fuel consumption to job requirements. Both offer three power mode levels: high power mode, a standard or normal mode and an economy mode.

According to Wall, “If operators are facing a deadline and need optimum power, then the HP mode would be appropriate. Conversely, if fuel economy is a priority, then the mode of choice would be the E mode.”

While these two companies subscribe to the “keep it simple” axiom, OEMs such as Komatsu and Doosan have chosen to give operators more control over an excavator’s functions and operations.

Komatsu’s Dash 10 excavators, for example, provide six working modes. The P (Power) mode provides maximum power for high-production, focused applications and the E (Economy) mode is for light work. Boebel describes the other four: “When a hydraulic breaker is used, a one-way flow breaker mode with adjustable flow rate can be selected. Additionally, the L or Lift mode increases hydraulic pressure for applications requiring improved lifting performance such as moving trench boxes. Lastly, two additional attachment modes, which are versions of the P and E modes, match hydraulics to attachments with low-flow requirements, such as a sheepsfoot roller compactor.”

“The power modes allow operators to manage the balance of fuel consumption and machine power based on their working conditions,” says Kleingartner. “A one-touch power boost button also provides a momentary increase in hydraulic power to break through hard ground and other tough digging conditions.” He notes that the power plus mode improves efficiency by 10% over the previous machines’ power mode setting, and the new optimized standard mode improves efficiency by 12% over the predecessors’ standard mode.

Across the board, OEMs see cost benefits for the end user in these high-tech solutions.

“The E Series excavators maximize productivity and fuel efficiency, while delivering the reliability and durability customers need and expect,” says Gray. “There’s no question that our machines are more efficient today from two perspectives. They deliver better fuel economy in gallons per hour and gallons per yard. In other words, they can move more dirt today than their predecessors with less fuel consumption.”

Kleingartner believes the new designs and technologies can help offset the cost increases from the implementation of low-emissions technology. “With proper training, operators can be the true differentiator to the bottom line,” he states. “They now have technologies at their fingertips that will allow them to adjust their excavator’s performance to fit their task-related needs.”

Boebel agrees, adding, “Educating operators to choose the most effective excavator working mode and the OEM’s ‘behind the scenes’ technologies will help improve on the job performance and reduce operating costs.”

Monitoring systems can help improve the return on investment of today’s excavators. For example, Komatsu’s standard KOMTRAX system provides vehicle operation information to help manage fleet idle time and maximize equipment use. With the system alerts, downtime can be minimized if an issue arises with the health of a machine.

Bruce Boebel notes that improvements in the Komatsu Dash 10 series excavator monitors were driven by the need to provide easier ways to service machines. “These monitors now include built-in, advanced, easy-to-use onboard diagnostic capability,” he points out. “Some OEMs require a laptop computer for advanced troubleshooting. Komatsu opted to incorporate vehicle diagnostics into the machine itself.”

Doosan excavators are also equipped with an easy to read LCD display panel for viewing critical machine data and configuring attachments. The manufacturer also has a standard fleet management system that allows customers and dealers to see/review critical machine information, monitor downtime and so forth.

Caterpillar’s Product Link technology also transmits information such as machine health, location, hours of use and fuel consumption back to customers and Cat dealers. This technology enables customers and dealers to proactively work together in managing equipment.

In addition, the E Series excavators are equipped with Cat Grade Control Depth & Slope technology. “The factory-installed system provides visual guidance of the jobsite plan to the operator without the use of traditional grade stakes, which saves time and money,” says Ken Gray.

As one OEM states, “Excavators are a mature product and operators likely won’t see huge changes in the way they look or operate, at least on the surface.” New technologies, however, will continually be adapted to these workhorses to improve their performance and cost benefits to end users.