Mining equipment is used for routing through rocky terrain along the Chisholm Trail Parkway in Texas. 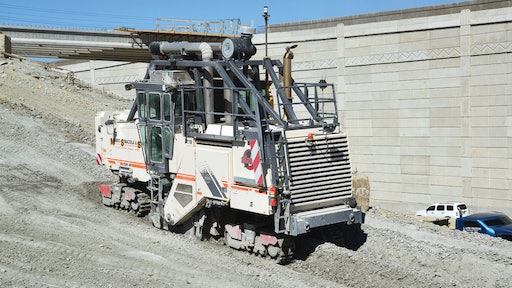 For the ramp construction, the compact Wirtgen 2200 SM was used with the optimal cutting depth of 10 in. in this terrain. Cut material was disposed of in windrows.

The North Texas Tollway Authority (NTTA) faced two problems when planning the 28-mile-long Chisholm Trail Parkway, a toll road that will in future connect Interstate 30 south of Fort Worth with the U.S. Highway 67 near Cleburne. For one thing, the planned route ran through exceedingly rocky terrain comprising solid limestone. The other problem was that conventional drilling and blasting methods were not permitted for this project.

“We are working inside the city limits of Fort Worth. Drilling and blasting are a thing of the past there and in the nearer environs,” says Mike Manley, equipment division manager, Mario Sinacola & Sons Excavating Inc.

The company contracted to undertake the work, Mario Sinacola & Sons, is one of the largest general contractors in northern Texas. It soon presented the quick, though somewhat unusual suggestion to use surface miners for road building to remove the extremely hard limestone substrate selectively, rapidly and with millimeter precision.

In the mining business, Mario Sinacola & Sons has successfully used Wirtgen surface miners to mine pay minerals for many years. The machines cut, crush and load the material in a single operation. Additional machines are not needed, considerably reducing the equipment, personnel and time required.

The extent of the project made the surface miners a practical solution. The job entails 2.14 million cubic meters of limestone with an average hardness of between 6,000 and 10,000 psi, including some areas with up to 16,000 psi.

“The earth works cover a vast area; the amount of rock to be removed is relatively large and the work very intensive,” says Chris Logan, project manager, Mario Sinacola & Sons. “The surface miners are decisive, especially when the dozers come up against their capacity limits. With the help of the surface miners, we can crush the hard rock to the desired grain size and use it directly in situ.”.

“Without the surface miners from Wirtgen, the work would proceed extremely slowly,” adds Channing D. Santiago, project administrator, Mario Sinacola & Sons. “We would instead have to use pneumatic drills for months on end and incur high costs in the process. Surface miners are the ideal choice for this application.”

While the 1,065-hp 2500 SM surface miner with an up to 600-mm cutting depth cuts meter after meter of the main corridor, two 2200 SM surface miners with a turning radius of just 2.5 meters demonstrate their prowess when routing narrower sections, such as ramps and crossings.

“By combining Wirtgen‘s standard grade and slope control system for simple adjustment of the precise cutting depth with an additional GPS-based system, the operator can optimally adapt the cutting process to the profile of the terrain,” says Robert Bauer, who is responsible for the Mining Division at Wirtgen America.

The unique cutting technology minimizes wear on the cutting tools, even in hard abrasive material, while simultaneously maintaining a consistently high extraction performance. Santiago also appreciates the advantages of the quick and easy tool change. “No hammers and no pliers are needed,” he notes, “Just an extractor, and the picks are quickly replaced.”

Using the surface miners, the planned bottom profile is neatly cut at the predetermined depth. In this way, the route forms an ideal sub-base for the paving courses.

Another advantage is that transport trucks can drive over the level surface without causing damage during the entire construction period. In Fort Worth, part of the reclaimed material is reused as a lower base course at a depth of 20 cm. Upon completion, the three-lane road will comprise a 10-centimeter-thick upper base course in addition to the substructure, and a 33-centimeter-thick fully reinforced concrete pavement.