If the materials being hauled are compatible with an ejector body, you may realize efficiency gains. 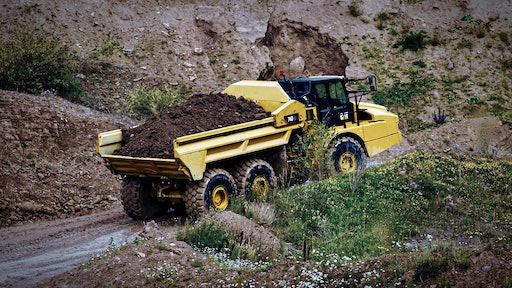 With an ejector truck, because you’re pushing material out the back of the truck, if you do happen to be in some wet and sticky material, you’ve eliminated your carryback.
Caterpillar

Unlike a standard articulated truck that raises its bed and relies on gravity to dump its load, articulated ejector trucks use a hydraulic cylinder to push material out the back of the bed. The center of gravity of the truck remains low throughout the unloading process and material flow can be precisely controlled while the truck continues to move forward, placing materials in lifts instead of piles.

There are several aftermarket ejector body offerings - from companies such as Weldco-Beales Mfg., Homes, K-Tec and Philippi-Hagenbuch - that replace the dump body that comes on the truck with the hydraulic-powered ejector box. You can either order new trucks that are ready for the conversion or convert existing tipper trucks already in your fleet.

“Most custom ejector bodies can be outfitted on an off-highway truck the operator already owns to maximize savings,” says Josh Swank, vice president of sales and marketing, Philippi-Hagenbuch Inc. “Though the initial investment is high, the return is seen after only a few months of use.”

“As a safer and more efficient alternative, many operations are opting to invest in rear eject truck bodies for their haulers,” says Swank. “This technology has several key benefits, including eliminating various time-consuming aspects of the standard dumping process and increasing operator safety. Depending on the manufacturer, further productivity can be found with low- or no-maintenance rear eject designs.”

To understand the increased efficiency, you really need to look at your entire earthmoving process and the necessary support equipment.

“An articulated truck gets paid to be loaded at Point A and go to Point B,” says Thomas. With a conventional tipper truck, the bed is raised at point B. “The only thing the articulated (tipper) truck can really do is raise its bed and put what it's hauling into a pile. We don’t suggest in any way, shape or form that you could spread that material with a tipper truck.” The truck also needs to be stationary when unloading. “The only thing you can do with a tipper truck is get loaded at Point A, drive to Point B and dump into a pile.”

An ejector truck is capable of the same task. “An ejector truck is loaded at Point A drives to Point B, stops and ejects the load out of the rear of the truck safely and just as efficiently as a tipper truck,” notes Thomas. But it is also capable of more. “It can spread on the go. Now, let’s get loaded at Point A. Let’s drive over to Point B, drop [the truck’s transmission] down into first or second gear and hold your finger back to [actuate the hydraulic ejector] and eject material from the bed. Now you’re spreading on the go.” This speeds the cycle time process and your ability to get back to Point A again and get loaded. “So you can increase productivity by getting more loads per day because you never stop at Point B."

Much of this cycle time improvement is due to the time it takes to unload a tipper truck. “One hindrance of end-dump trucks is the time it takes to stop, dump and wait for the body to completely drop back down before driving away,” says Swank. “It takes roughly 12 seconds for bodies to lift and another seven seconds to drop back down. And that doesn’t include the time it takes to find steady ground and empty the truck. On paper this doesn’t seem like a significant amount of time, but in reality when trucks take dozens of trips each day, those seconds start to add up. Rear eject bodies eliminate the need to stop and lift during the dumping cycle, saving valuable time with each dump and increasing efficiency by up to 25%.”

Spreading on the go also results in lifts instead of piles, which creates less work for the support equipment used to manage the dump site. “Compared to the large piles left by end dump trucks, this even spread requires significantly less dozing and spreading time,” says Swank.

Reduced work at the dump site can translate into support equipment savings. For example, assume there is a compactor and a motor grader to maintain the haul roads used by the trucks and a dozer on the site to help spread the loads and manage the fill area. With the ejector truck spreading the load, now you might be able to eliminate the dozer or at least downsize it. You don’t need the dozer to knock down the piles being created by the tipper trucks.

“To increase productivity you need to spread on the go, and by doing so you can reduce or eliminate support equipment," says Thomas.

This is due to the design of the ejector body. “With an ejector truck, because you’re pushing material out the back of the truck, if you do happen to be in some wet and sticky material, you’ve eliminated your carryback,” says Thomas. “There is nothing worse than getting a truck full of material and when you go to dump, half of it is stuck in there. By the end of the day, you have 5 or 6 tons of material stuck in the bottom of that truck that you’re not getting productivity out of because you’ve reduced your capacity.”

Whenever you raise the bed of an end dump truck into the air,  you need to be concerned with underfoot conditions and the change in the truck’s center of gravity as well as any overhead obstructions.

There is virtually no change in the center of gravity when unloading an ejector truck. “We don’t have to raise the bed to get that material out,” says Thomas. “You can work under a power line, spread under a bridge.” They can even work underground and on side slopes. “There are just so many possibilities that come with the ejector truck because it can do the same thing a tipper truck can do. It can dump material into a pile if need be, but no other trucks can do what that truck can do.”

Ejector trucks can minimize stresses traditionally placed on the operators and trucks. “Standard dump trucks put a significant amount of a truck’s load over the rear axle while unloading, sometimes causing the front of the truck to raise off the ground due to the improperly balanced load,” says Swank. “As the load drops out the back, the truck and driver can be lifted, only to come back down abruptly once the dump is complete. This repeated process stresses the truck chassis as well as the operator who, over time, can suffer from back and neck issues caused by the repeated impact. Since the blade of a rear eject body pushes material out at a steady rate - unlike the uncontrolled mass that drops from a gravity-fed dump body - the truck maintains a lower and more balanced center of gravity," he points out.

He adds, “Because rear eject bodies eliminate the need to raise the body, the truck can safely dump materials near overhead barriers such as electric lines, bridges, pipelines and support beams, as well as in closed areas or underground mines. This makes them an ideal solution for crowded jobsites with strict height restrictions.”

Response to Ejectors is Mixed

“What I will caution customers is if you are going to have an ejector truck, it only makes sense to run them in a fleet,” says Thomas. “The biggest challenge with getting contractors to adopt the ejector truck is they have mixed fleets.”

Tipper trucks also have a very wide appetite for materials. “You can put anything in that bed and when you raise, it will come out,” says Thomas. “Most contractors don’t even run tailgates.”

The truck could be used to haul land clearing material that includes dirt mixed with logs on one day. "Tomorrow, it can be hauling topsoil; the day after clay and overburden mix," says Thomas. "With an ejector truck, we do not like to see anything bigger than a volleyball. But if you are into moving dirt, the ejector is the way to get increased productivity.”