Beverly Construction uses GPS to reduce the surcharge, and costs, on this $25 million earthwork and utility installation job 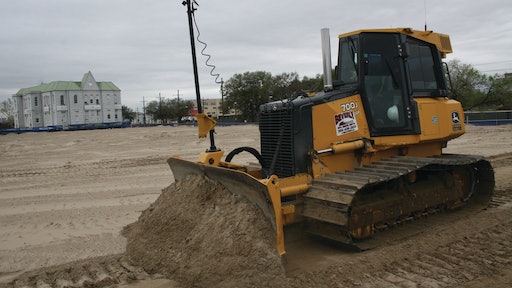 Heading up the earthwork and utility installation is Bridge City, LA-based Beverly Construction, which is subcontracting to Swedish giant Skanska, the general contractor for the project. The value for Beverly’s part of the UMC project is about $25 million, which includes both the site package and onsite utilities.

A Timely Investment in GPS

According to Peter Russell, Beverly’s field engineer, a roughly 16 square block area, formerly old mixed residential and commercial property, was demoed last year to make it available for construction. "We actually got on site in October of 2011, and started by removing more than 70,000 cu. yds. of the unsuitable soil — material which, through soil borings and on-site inspection, was found to be too high in organic content," he says. "With that stripped and hauled off, we moved on to bringing in the surcharge.”

The surcharge is an overload of material used to compress and compact strata beneath the proposed construction. In many cases, New Orleans-area contractors are dealing with negative sea level elevations. In this case, Beverly brought in anywhere from 5 to 7 ft. of sand. “We didn’t get the settling that we wanted at first, so we added 2 ft. to what was initially in the spec,” Russell says.

Fortunately, Beverly had just made the move to GPS. “Prior to this, we hadn’t really felt the need to invest in a GPS system,” says Russell. “But more and more, we began to see what other contractors in the area were doing with it and convinced management of all of its strengths."

The contractor ended up purchasing a Topcon HiPer base and rover as well as Topcon’s 3D-MC2 machine control system for a new John Deere 700J dozer. "We first tested the new gear on a local road project, worked out any bugs then set it to work here," says Russell.

Previously, Beverly used robotic total stations for most of its projects. “Robotics is a direct line-of-sight based technology which, in many cases, is just fine and very productive," Russell states. "However, on a site like this, when you have trucks running in and out, robotics’ production falls off. GPS, on the other hand, isn’t affected by such things. We liked that fact.”

To allow for the 270,000+ cu. yds. of material that the company dredged from the Mississippi River and made ready at its sand pits, Beverly took its surface models and constructed the layout for a finished grade. From there, it was a simple matter to offset the GPS an additional 2 ft. in the machine and go to work.

“We are doing a lot more with one dozer than we did in the past with several machines and manual survey techniques says Russell. "Before, we relied heavily on staking, grade checkers and so on. Now, we just rough it in with the other dozers and then the 3D-MC2-equipped machine comes in and does the final grade. It’s allowed us to see a real boost in production — particularly in that surcharge portion of the job.”

The same advantage will extend to construction of the onsite pads for the towers for diagnostic treatment and inpatient services, as well as for the parking ramp, each of which has its own elevation. “The finished floor for the towers is at a 3-ft. elevation, while the elevation for the parking ramp will be anywhere from 1 to 2 ft. in elevation; each of those is determined by slab thicknesses” says Russell. “That’s now been built right into the model and will be easily controlled via offsets, just as in the surcharge facet of the job.”

With the major site work completed, Beverly is currently handling sewer, water and drainage installation along the east side of the project. The utility work is also benefiting from the use of GPS.

“For this job, we have more than 170 storm drain structures, around 30 sanitary sewer structures and a few miles of pipe. We are using the Topcon base and rover to do horizontal and vertical layout for all the site utilities and, once installed, will use it again to perform our as-builts," says Russell. "That too would have been a time-consuming process using traditional techniques.

"This new technology is at least twice, maybe even three times as fast as our old approach since we no longer have to constantly re-stake areas," he states. "It also saves on labor, since we don’t have to have someone continually shooting grade or stringlining things.”

Construction is expected to be wrapped up by late 2013 with full occupancy by February of 2015.

With CalAmp iOn™ Tag, easily track and ensure the right equipment is in the right vehicle, yard or storage area, enabling improved service, operational efficiency and cost savings on equipment that may otherwise be lost or misplaced.
October 19, 2020
Latest

You Can Design Your Own Cat D6 Dozer

New tool provides customers and dealers a better opportunity to understand the Caterpillar equipment including viewing key features and changes from the previous dozer model
April 11, 2019
Follow Us