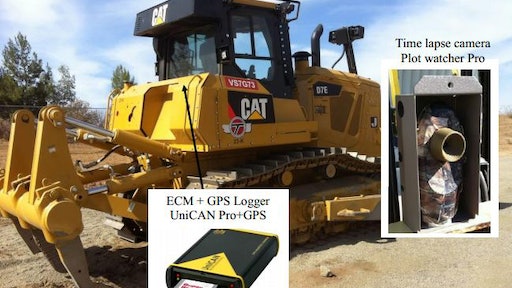 A University of California study asserts that while hybrid and electrically driven earthmovers reduce fuel consumption 28 percent, with attendant greenhouse-gas reduction, they also produce more smog-forming oxides of nitrogen than their non-hybrid counterparts.

The California Air Resources Board funded the two-year, $2-million study, and it was conducted by the University of California, Riverside’s Bourns College of Engineering Center for Environmental Research and Technology. The study compared Caterpillar’s D7E electric-drive dozer to a conventional D6T, and Komatsu’s HB215LC-1 hybrid excavator to the PC200 Tier 3 conventional excavator in real world applications. The D7E and HB215LC-1 demonstrated fuel savings of up to 28% while emitting up to 21% more nitrogen oxides, or NOx.

Caterpillar calls into question this claim in the study’s executive summary: “Our weighted activity estimates resulted in the hybrid D7E having an overall . . . NOx emissions dis-benefit of approximately 13% . . .” saying that it is misleading.

Cat points out that all of the powertrains studied – conventional, diesel/electric, and hybrid – complied readily with applicable U.S. EPA diesel exhaust regulations.

“Variations in the NOx production, as reported, are minimal, within normal variability and most importantly, below the NOx standard,” according to Caterpillar’s written statement on the test.

Hundreds of hours of D7E dozer and HB215LC-1 excavator activity were observed and logged at six locations to develop typical in-use hybrid dozer and excavator duty cycles. Fuel consumption and emissions from the subject equipment was evaluated in these common duty cycles.

Komatsu issued a statement acknowledging the study’s level of detail, but pointing out, “Operation of a hydraulic excavator in various applications will return varied results on fuel consumption and emissions.  The report's data shows wide variances in each of these measured parameters based on application.

“Komatsu continues to be committed to our hybrid technology and the added benefits of the future integration of Komatsu Hybrid technology with Tier 4 Interim and Tier 4 Final engines,” according to the company’s official statement.

Significantly, nobody is questioning the 28 percent fuel economy advantage the study measured with hybrid/electric-driven machines in real-world applications.

Is Climate Change a Reality – And Does It Really Matter?

Dick Riggert tells how he got one of the world's largest dozers from 1950, the 140-hp HD19 Allis Chalmers. Find out where to see antique machines like this work in September.
August 1, 2011
Follow Us