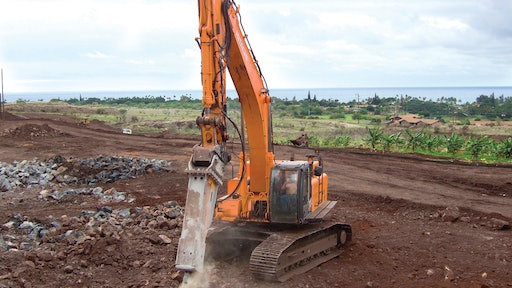 Blasting was not called for in the bid specs. Excavators equipped with rippers and hammers got the job done.

Lahaina, located on the northwest coast of Maui, was once a busy whaling port and the capital of the Kingdom of Hawaii. Today, tourism reigns as king, with the town’s population swelling nearly 400 percent during peak seasons. Such an influx of people puts quite a strain on the arterial roadways.

The need for a bypass around Lahaina was identified over 30 years ago. As most major highways in northern Maui hug the coastline on one side and are hemmed in by buildings or natural barriers on the other side, existing roads cannot easily be widened. So it was decided to build the bypass further inland, closer to the central volcanic-formed mountains and their water-carved gulches. This ensured plenty of construction space but meant dealing with less-than friendly terrain.

As the bypass is being built inland, away from heavily populated areas, one would think blasting would be the best way to remove the extremely hard volcanic basalt rock. But this project did not allow for drilling and blasting in the specifications. Instead, it called for all material to be removed by an alternate means. GBI chose to rely on its Hitachi excavators to get the job done.

“Our Hawaiian basalt rock is known for being very hard and difficult to extract,” says Bo McKuin, project manager. “We pride ourselves on our ability to rip basalt rock - it is one of our specialties. For this project, we used up to four Hitachi excavators equipped with rippers and hammers, along with some dozers and other equipment. We had three ZX450LC-3s already here on Maui, but the biggest excavator in our fleet, the ZX800, we shipped from Washington state, where we also maintain offices.”

“Of the 650,000 cubic yards of material we had to excavate, about 240,000 cubic yards was basaltic rock,” says Ray Skelton, director of business operations - Maui, Kauai and Molokai. “In excess of 200,000 cubic yards of that rock was removed using excavators and dozers. For the remainder, DOT and the community granted us permission to blast. So drilling and shooting took care of just a small fraction of the overall rock we had to remove; it was the Hitachi excavators that did the bulk of the work. They got the job done.”

Most of the excavated rock was processed and crushed onsite and reused for the roadbed. It also provided backfill for drainage systems.

Although GBI carved and graded four lanes out of the landscape, only the two inland-most lanes will be paved. As more money becomes available in the future, the rest will be paved to create a divided four-lane highway.

Now that the grading and mass excavation portion is completed, there is much more work for the Hitachi excavators to do.

“We use our Hitachi excavators to support all of the facets involved in this project - from utility relocation and rock ripping to forming detailed footing for the concrete structures,” says McKuin. “We’ve equipped them with Trimble GPS guidance so our talented operators can precisely follow the project models we’ve established.”