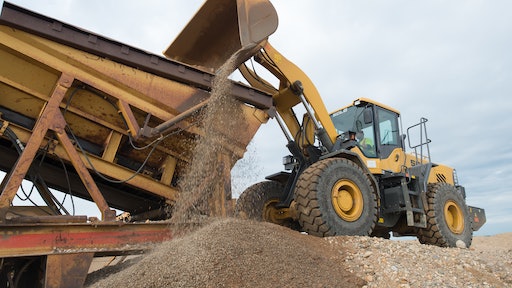 At work in the rock pit, the LG959's 4.0-cu.-yd. bucket size has increased efficiency, feeding the wash plant with up to 193 US tons of rock and gravel per hour.

Based in Moose Jaw, Saskatchewan, Canada, Emshay Enterprises is a family-owned business that has been producing and selling aggregates for 15 years. The company operates two crushers, a wash plant and a rip-rap plant to mine sand and gravel. It has a fleet of 10 trucks, as well as a crew of private truck operators that deliver to customers.

Like many small businesses, overhead costs are the key to Emshay's profitability. When the company needed a wheel loader to work its rock pit, it was presented with a choice: a used, auction-bought premium machine or a brand new SDLG wheel loader. Emshay Enterprises went with the SDLG, and after almost two years on the job, the company is sure it made the right choice for its business.

Shayne Emmons, owner and president of Emshay Enterprises, says its purchase of a SDLG LG959 was based on the unique needs of his company. He did not want to purchase a premium wheel loader with features that he did not need. Also, he says, the company’s track record with used auction machines left much to be desired.

“I used to go to auction sales and search for wheel loaders from the early 2000s, but once I put them to use, none of the machines lasted very long,” he explains. “With the SDLG LG959, I got a brand new machine with a warranty and support from [Saskatchewan-based] Redhead Equipment, a dealer that I trust. Plus, the loader was priced very well. I was not paying for features that I didn’t need. ”

High Production for Low-hour Use

The LG959 has an operating weight of 38,250 lbs. and is equipped with a Deutz Tier 3 engine with 224 hp and 777 lbs.-ft. of torque, plus a ZF transmission and axles. It also includes wet disc brakes, a hydraulic quick coupler and third-function hydraulics, a modern fit and finish with high visibility and an operator-friendly cab. It comes with a 12-month, 1,500-hour warranty. “The warranty is great. It was one of the big factors in the purchase decision,” says Emmons.

Emshay is using the LG959 in its rock pit, and is only putting on some 300 to 500 hours per year. Emmons says the wheel loader’s 4.0-cu.-yd. bucket size has increased the company’s efficiency, feeding the wash plant with up to 193 US tons of rock and gravel in an hour, significantly more than the company was able to move with previous machines. The larger loads allow Emshay to keep the wash plant continuously running, removing silt from the construction aggregates and increasing the company’s yield.

The loader is also used to load the final aggregate product into trucks for shipment. The increased bucket size allows Emmons to load trucks with gravel in only four to six passes, where before, with a smaller bucket, it took up to eight passes.

Emmons purchased a scale to add onto the loader, allowing the company to weigh aggregates onboard the machine. With the scale, Emshay can weigh a load while the loader is moving it, and then dump the rock directly into the trailer, rather than unloading the aggregate onto a scale only to reload it for shipping.

“The onboard scale upgrade was useful and also very affordable,” Emmons says.

Emmons also appreciates how easy the LG959 is to use and maintain. “I have buyers that load the aggregates themselves,” he notes. He has never had to instruct them on how to use the machine; they are able to figure out its user-friendly interface without additional training. “Quite a few have been very impressed with the LG959 and, with my recommendation, are now considering purchasing one, too. I would definitely recommend the SDLG loader and I may even buy another for our company.”