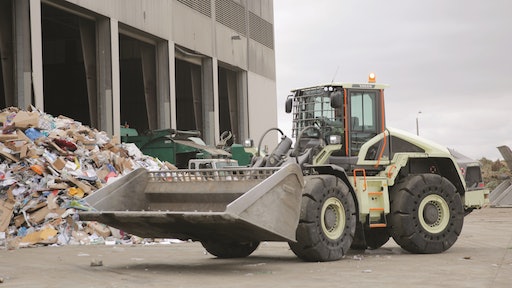 Volvo CE's LX1 prototype electric hybrid wheel loader at Waste Management's Moreno Valley Transfer Station. The LX1 is a series hybrid, which puts an electric motor at each wheel and replaces an equivalent-sized conventional loader's 13L engine with a 3.6L diesel, on board strictly to run the loader's generator. Volvo says 98% of the components on the LX1 are new.

Volvo Construction Equipment (Volvo CE) presented field test results for its LX1 prototype electric hybrid wheel loader at a press event in CA, on July 12. The company organized the event alongside its customer Waste Management, which carried out the field tests; CALSTART, which conducted emission tests on the machine; and the California Energy Commission, which helped fund the LX1 project. Since the end of last year, the LX1 has performed hundreds of hours of real work in two applications at Waste Management facilities in California. 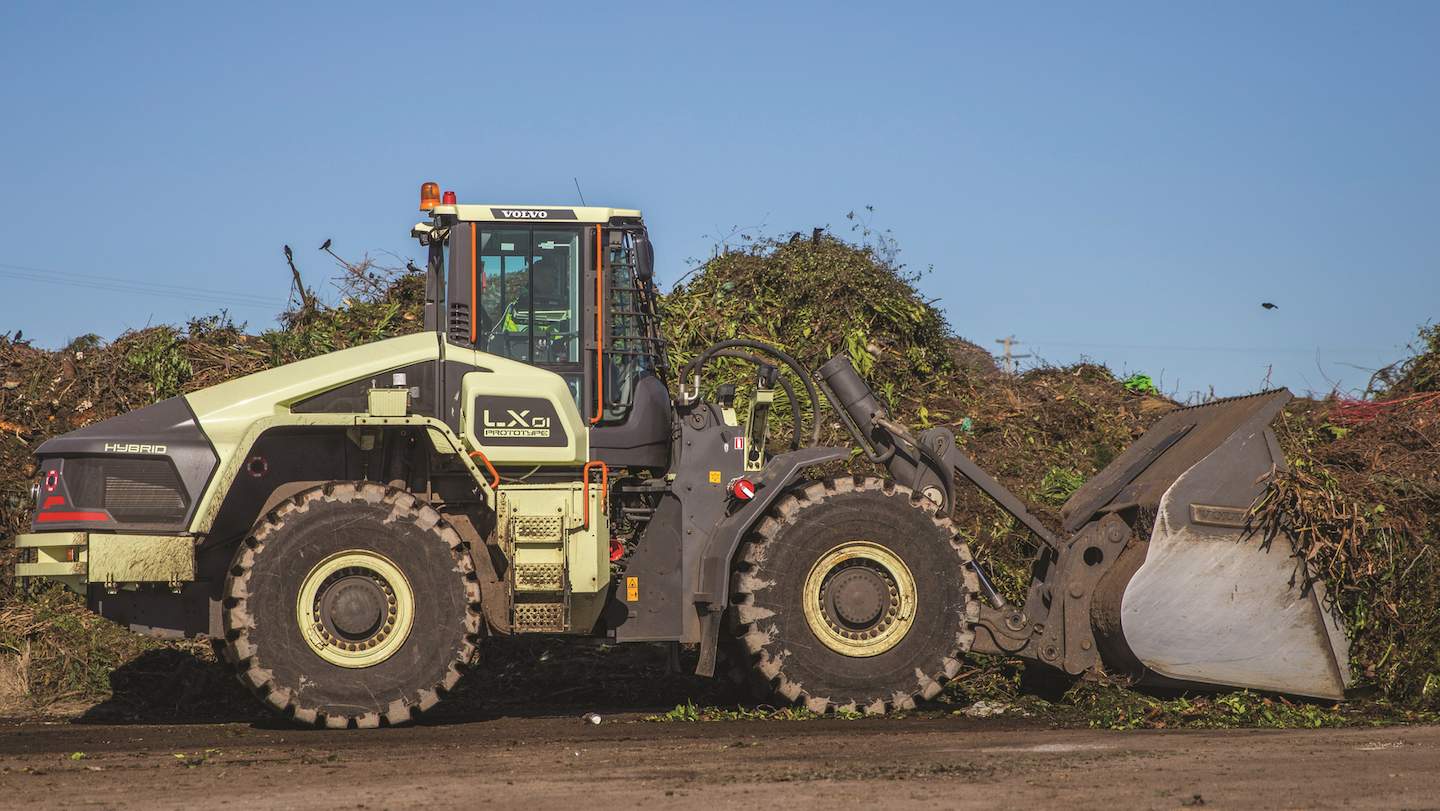 Individual wheel motors eliminate the Volvo LX1 hybrid loader's mechanical drive line -- drop box, drive shafts, differentials and axles. Designers took advantage of the structural change to move the loader arms closer to the tractor's center of gravity. The result is that a Volvo L120-sized machine works with an L150-sized bucket.Testing began at the Redwood Landfill and Recycling Center, a green waste composting site in the northern part of the state. Both fuel efficiency and greenhouse gas emission tests were conducted at the facility and, although the data is still being analyzed, the results so far show an average improvement of 50% in fuel efficiency, equating to a reduction of 35% in fuel consumption and greenhouse gas emissions. The second test site was the Moreno Valley Transfer Station, a waste transfer site in southern California. Here, the LX1 achieved an average fuel efficiency improvement of around 45%. Both sets of results exceed the 35% fuel efficiency improvement target set for the project.

“We are pleased with the results from the field testing,” says Scott Young, electromobility director at Volvo CE. “Although we’d already seen the LX1 reach up to a 50% improvement in fuel efficiency in our internal tests, every application and operator are different. Because of this, we were aiming for a 35% improvement in fuel efficiency in this project. But we are happy to say that we’ve significantly exceeded this figure and achieved similar results to those recorded at our test site in Sweden.”

Waste Management is the largest environmental services and recycling company in North America, it operates one of the largest fleets of Volvo CE equipment in the world. Prior to testing the LX1, the company ran a conventional machine at both sites to gather baseline data.

“Three experienced operators from Waste Management, who were trained and supported by Volvo CE engineers, carried out their daily work with the LX1 and provided us with valuable feedback,” says Young. “Their responses were positive, they liked the dramatic reduction in noise, improved visibility over the rear of the machine, ease of operation and powerful hydraulics. But they also gave us constructive feedback on areas we can refine, such as improving functions like traction control and gear shifting, actions that will enhance operability. Now we’ve concluded the field tests, the machine will be shipped back to Sweden for updates and tuning based on what we’ve learnt over the last six months. At this stage, the LX1 is still part of a development project and it is not commercially available.”

The California Energy Commission provided over $1.8 million of funding for the LX1 project through its Alternative and Renewable Fuel and Vehicle Technology Program. The program invests up to $100 million per year to support advancements in alternative, renewable fuels and the vehicles powered by them in California. “The Energy Commission is pleased to invest in projects like the development and demonstration of Volvo’s LX1 electric hybrid wheel loader,” says Energy Commissioner Janea A. Scott. “Demonstrations like these help improve the viability of cleaner, less polluting technologies for near-term market adoption in California’s commercial goods movement, transit and other sectors.”

The LX1 is a series hybrid that incorporates a driveline that consists of electric drive motors mounted at the wheels, electric driven hydraulics, a battery energy storage system, a significantly smaller diesel engine and new machine architecture. It’s this combination that enables the substantial gain in fuel efficiency. As well as the improvement in fuel efficiency and reduction in emissions, the LX1 also offers a significant reduction in noise pollution compared to its conventional counterparts. The prototype – which has 98% new parts and a fundamentally new machine design – is capable of doing the work of a wheel loader that’s one size larger.

“Volvo CE has long-term plans to develop products and services for electromobility, including electric hybrids and electric sites,” concludes Young. “Although we believe that there will be a major shift towards electric hybrid technology in the future, our customers, quite rightly, want improved efficiency now. This requires a balance in our development activities. Therefore, we are also optimizing more conventional technologies and soft offers which will compete with hybrid technology for some years. Before we launch a machine like the LX1, you can expect to see elements of this design incorporated into our products. This supports short and mid-term developments and requirements while the market continues to accept hybrid technology, technology improves and the cost of new technologies decreases.”