Liebherr Expands Its 2012 Revenues, and its Global Presence 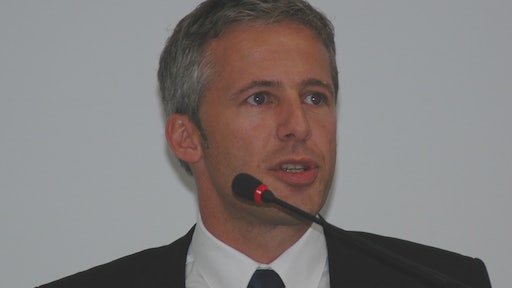 Stefan Heissler, member of the board of directors of Liebherr-International AG, parent company of Liebherr Group, discusses the Group's progress in the 2012 business year.

At a press conference at its Brazilian manufacturing site in Guarantingueta, Stefan Heissler, member of the board of directors of Liebherr-International AG, parent company of Liebherr Group, brought international construction editors up to date on Liebherr Group developments.

Established in 1949 by Dr. Hans Liebherr in Kirchdorf, Germany, the family business has grown to a group of more than 130 companies, including 40 production companies worldwide. The business is jointly run by Dr. h.c. Willi Liebherr, Chairman, and his sister Dr. h.c. Isolde Liebherr, Vice-Chairman of the Supervisory Board of Liebherr-International AG.

Earlier this year, Willi Liebherr and Isolde Liebherr assigned a proportion of their shares in the Liebherr Group’s parent company to their children. In the future, individual divisions will be managed jointly with a representative of the third family generation. Initially, Jan Liebherr, Stéfanie Wohlfarth, Sophie Albrecht and Patricia Rüf will assume responsibility for corporate management and supervisory tasks.

Liebherr is divided into 10 divisions. The four product divisions in the construction machinery and mining sectors (Earthmoving, Mining, Mobile Cranes and Construction Cranes and Mixing Technology) account for about 65% of our Group’s total turnover. Other product divisions include Maritime Cranes, Aerospace and Transportation Systems, Machine Tools and Automation Systems, Domestic Appliances, Components, as well as Hotels.

Sales revenues from mobile cranes declined, however, by 5.2% to 906.8 million €. In the construction cranes and mixing technology division, turnover reached 284.6 million €, 3.6% below 2011 figures.

The development of other divisions was positive. Turnover from these product areas increased 13.9% to 1,549.6 million €.

"According to the latest forecasts, the growth in world production in the current year is not likely to exceed 3.3%," Heissler stated. "With this as a background, the WTO has also reduced its world trade growth forecast. In September, it expected global growth of no more than 2.5%, compared with the growth rate of 3.7% that it had anticipated last April."

The economic slow-down has resulted in a moderate outlook for 2012. "For the Liebherr Group, we forecast a turnover for 2012 in the region of 9 billion €, equivalent to an increase of almost 9% or rather more than 700 million €," said Heissler. "We currently anticipate that at the end of 2012, our more than 130 Liebherr Group companies will be employing almost 38,000 people, which is an increase of over 2,600 people or +7.5%."

Investment in the Future

Liebherr Group anticipates total investments in its operations in 2012 to be roughly 770 million €, or an increase of about 10%. These funds are being allocated to the modernization and expansion of its worldwide production facilities and to further strengthen its sales and service network. Following are some highlights:

Developments for the BRIC nations of Russia, India and China include: