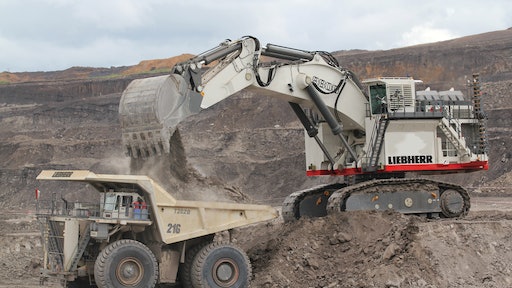 In 2012, Liebherr increased its sales revenue by almost 490 million Euros or 9% in the construction machinery and mining equipment product areas.

The 2012 business year progressed well for the Liebherr Group, despite the reduced dynamism of the world economy in the final months of the year. The Group increased its total turnover in the past business year by more than 760 million Euros (more than 9%) to 9.1 billion Euros.

In the construction machinery and mining equipment product areas, Liebherr increased its sales revenue by almost 490 million Euros or 9%. Total sales revenue from these areas was approximately 5,870 million Euros. As in the previous year, this represented about two-thirds of the Group’s total turnover.

There was an above-average rise in turnover from the mining division, by almost 280 million Euros or 28%. This was a slight increase on the previous year’s rate of growth. Total sales revenue was 1,290 million Euros.

Whereas turnover from the mobile cranes division fell last year, it has now also grown at an above-average rate, by more than 200 million Euros or 12% to a total figure in excess of 1,940 million Euros.

In the earthmoving, tower cranes and concrete technology divisions, sales revenue remained at approximately the same level as in the previous year. Sales of earthmoving equipment brought Liebherr a turnover of approximately 2,060 million Euros. The tower cranes and concrete technology division generated a turnover of some 580 million Euros.

In areas outside construction machinery and mining equipment, the Liebherr Group achieved a total turnover of 3,220 million Euros, equivalent to an increase of about 280 million Euros or 9%. There was growth in all the relevant divisions, namely in the maritime cranes, aerospace and transportation systems, machine tools and automation systems areas and in domestic appliances.

The maritime cranes division recorded growth of more than 20 million Euros or 3% to a total turnover of approximately 830 million Euros.

Turnover according to region

In the 2012 business year the Liebherr Group’s turnover went up in all its sales regions. Particularly high rates of growth were recorded in Eastern Europe and Africa. The Group’s largest individual markets during that period were Germany, Russia, the USA, Australia, France, Great Britain, Brazil, Canada, the Netherlands and Austria.

The Near and Middle East regions generated a turnover of almost 310 million Euros in the past business year, an increase of nearly 20 million Euros or 6%.

In America turnover also developed positively, with an increase of almost 140 million Euros or 11% to approximately 1,500 million Euros.

The annual accounts of Liebherr-International AG, Bulle (Switzerland), indicate a surplus for the Group of approximately 540 million Euros, an increase of nearly 60 million Euros or just under 12%.

To match the Group’s growth, the workforce grew again significantly in the review year, at the end of which Liebherr employed some 37,800 people worldwide, an increase of approximately 2,470.

At the end of the year the Group had some 15,500 employees in Germany, about 980 more than at the same time a year previously. The number of employees at Austrian Liebherr companies went up to approximately 4,790 in 2012, about 60 more than in the previous year. Nearly 320 new jobs were created in France, for a total in the region of 3,270 on December 31, 2012. In Switzerland, there were about 80 new employees, bringing the total up to approximately 1,280. In the remaining European countries the total workforce increased by about 370 to approximately 5,070 employees.

In regions outside Europe, the workforce grew by about 650 to a total of about 7,880. Liebherr companies on the American continent had some 3,480 employees in all on December 31, 2012, about 260 more than at the end of 2011. Some 300 new jobs were created during the review year in Asia and Australia; this put the total workforce up to more than 3,550. In Africa the workforce increased by about 90 to a new total of almost 850.

In 2013 the Liebherr Group currently expects total turnover to reach the same level as in the previous year. Relatively moderate development is to be expected in the construction machinery and mining areas in particular.

Since the sales and service network is to be enlarged again and capacity increased at various production locations, creation of further new jobs is planned for 2013.

Liebherr Expands Its 2012 Revenues, and its Global Presence