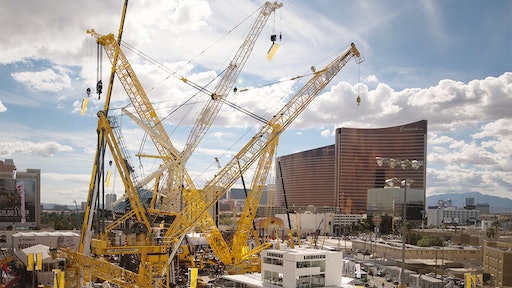 The world economy grew last year by only 3.0%. Whereas some fully developed national economies demonstrated a gain in dynamism, the speed of growth was lower in certain threshold countries.

Turnover According to Product Groups

As in the previous year, Liebherr achieved distinct growth with its mobile cranes. Turnover rose by 138.2 million € or 7.1% to 2,077.8 million €, due especially to increases in Germany, the USA and the Netherlands, the division’s largest markets during the past business year. The tower crane division in particular achieved a most welcome increase in turnover, of 37.4 million € or 10.4% to 395.5 million €. Growth was recorded in Germany, Switzerland and Russia, the three largest markets for Liebherr tower cranes. Results from the concrete technology division were also positive: turnover went up by 9.3 million € or 4.2% to 230.7 million €.

Divisions outside construction machinery and mining recorded an increase in turnover of 111.9 million € or 3.5%, to 3,333.2 million €. The divisions include maritime cranes, aerospace and transportation systems, machine tools and automation systems, domestic appliances and other products and services, the latter including the components division.

Turnover from other products and services almost equaled the previous year’s figure. Sales revenue dropped by 1.2 million € or 0.6%, to a new total of 207.2 million €. Other products and services include sales revenues from the sale of driveline and control system components to customers outside the Liebherr Group, and also turnover generated by the Group’s six hotels in Germany, Ireland and Austria.

Turnover According to Sales Regions

After positive results in the previous year, turnover in 2013 developed very differently from one sales region to another. The Liebherr Group’s largest sales markets were Germany, the USA, Australia, Russia, France, Great Britain, Canada, the Netherlands, Brazil and South Africa.

In Western Europe, the Group was able to increase its turnover by 191.2 million € or 4.8% to 4,157.5 million €. In Germany, its largest overall market, the increase in turnover was above average.

In the Near and Middle East, turnover was 306.5 million €, equivalent to a drop of 1.4 million € or 0.5% compared with the previous year. Significant increases were recorded in Saudi Arabia and the United Arab Emirates.

In America, the Group was unable to maintain the previous year’s positive business pattern. At 1,470.3 million €, turnover was down slightly by 28.8 million € or 1.9%. There was a drop in sales revenues in the U.S.

On the African continent, the Group’s turnover after a year of satisfactory business activity totaled 606.0 million €, an increase of 14.2 million € or 2.4%.

Following an upturn in the Far East/Australia region in the previous business year, the Group’s turnover dropped to 1,509.2 million € in 2013 and was therefore 162.7 million € or 9.7% lower.

A surplus for the year of 364.1 million € (previous year: 552.0 million €) is shown in the 2013 consolidated accounts of Liebherr-International AG in Bulle, Switzerland. This figure represents a reduction of 187.9 million € or 34.0% compared with the previous business year. Exchange-rate fluctuations, especially in threshold countries, were one of the significant causes of this downturn.

During 2013, the Liebherr Group’s workforce increased in size by 1,623 employees or approximately 4%. At the end of the year 39,424 people were employed at Liebherr Group companies.

At the German companies, the total workforce went up to 16,265 employees. The total for Austria, very little changed from the previous year, was 4,810. The workforce at Liebherr Group companies in France increased to 3,408 at the end of 2013. In Switzerland, 193 employees were taken on by the Group, resulting in a total workforce of 1,469 at the end of the review year. The total number of employees in other European countries rose by 441 to 5,514.

Outside Europe, the workforce increased in size to 7,958 employees. On the American continent, the workforce decreased to 3,383 at the end of 2013. In Asia and Australia, 134 new jobs were created, so that Group companies there employed 3,687 people at the end of the review year. Liebherr Group companies on the African continent employed a total of 888 people on December 31, 2013.

In the 2013 business year, the Group’s investments reached a total of 830.0 million €, and thus matched the previous year’s level. 552.5 million € were invested during the year in the construction machinery and mining area, approximately half being devoted to the earthmoving division. Construction work began in the summer of 2013 on a new logistic centre near Kirchdorf an der Iller, Germany. Among the investment projects undertaken by Liebherr-Hydraulikbagger GmbH in Kirchdorf was an initial and follow-up training center.

Last year the mining division invested 106.2 million €. In addition to extensions in Colmar, France, and Newport News, VA USA. The division undertook similar enlargements to its facilities at various locations in Australia, including Adelaide and Perth.

The mobile crane division invested 83.6 million €. In Ehingen (Donau), Germany, Liebherr’s investments included a new assembly building for experimental work, undercarriage acceptance testing and the assembly of large sunshades. The tower crane division invested 73.2 million € in the past year. In Biberach an der Riss, Germany, construction of a new training center was completed in the autumn of 2013, and a new surface technology building also erected. Investments by the concrete technology division amounted to 13.1 million €. In Bad Schussenried, Germany, an investment was made in application technology for the painting of concrete mixing plant.

During the review year, investments by the components division included an extension to Liebherr Machines Bulle SA in Bulle, Switzerland. Liebherr-Components Biberach GmbH began construction work on a branch factory near the existing location.

In the current year, the world economy will probably develop rather more dynamically than in 2013; the International Monetary Fund forecasts growth of 3.6%. In its initial estimate for 2014, the Liebherr Group expects total turnover to be equivalent to the 2013 figure, though development will differ from one division to another. There will probably be a further increase in the size of the workforce.

A redesigned dump box, premium cab options and three drive modes are just a few of the refinements.
Curt Bennink
April 21, 2021
Follow Us