Your Guide to DEF TLC

With selective catalytic reduction (SCR) technology making its way into off-road engines, it's important to know how to properly manage diesel exhaust fluid. 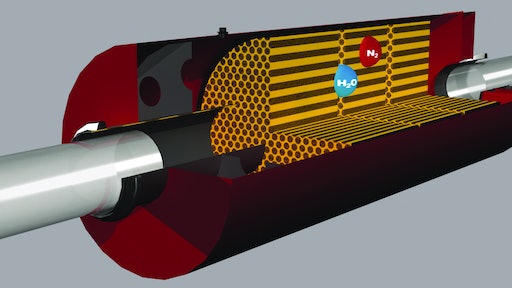 Small amounts of DEF are sprayed into the exhaust upstream of the SCR catalyst. This generates a chemical reaction that breaks the exhaust (NOx) down into nitrogen and water vapor. (Illustration provided by Cummins Inc.)

Since January 1, 2010, on-highway vehicles sold by any truck OEM other than Navistar have been equipped with a selective catalytic reduction (SCR) system using diesel exhaust fluid (DEF). “Therefore, it is highly likely that many [contractors] either have or soon will have one of these engines on their lot/site,” says Brad Williamson, Engine and Component Marketing, Daimler Trucks North America.

“DEF has been mostly used on on-road vehicles. However, there have been a number of DEF users in stationary applications,” notes Thierry Leprince, R&D manager at Nett Technologies, a manufacturer of SCR systems for construction equipment. He adds that some OEMs are in the process of certifying SCR-equipped non-road engines for Tier 4 Interim emissions standards.

Already this year, Case and Kobelco have introduced Tier 4 Interim-certified earthmovers incorporating SCR, and Cummins announced that SCR will be a primary element in its Tier 4 Final products extending from 75 to 675 hp starting in 2014. Other OEMs and engine suppliers are likely to follow suit.

With SCR on its way to becoming more common in construction fleets, it’s important to have a grasp on how to properly manage and maintain the system. This includes proper handling of the fluid that makes up one of its primary components.

Diesel exhaust fluid is a solution of 67.5% deionized water and 32.5% high-purity urea, a compound of nitrogen that turns to ammonia when heated.

“DEF is the reactant necessary for the functionality of the SCR system,” says Clint Schroer, off-highway communications, Cummins Inc. “Small quantities… are sprayed into the exhaust upstream of the SCR catalyst. This then converts the NOx [oxides of nitrogen] to harmless nitrogen and vapor.”

“Its primary function in controlling emissions,” Williamson elaborates, “is to act as an ammonia-carrying agent to create a chemical reaction between the exhaust gases and ammonia to break down NOx into nitrogen and water.” These byproducts are then released into the atmosphere via the exhaust stack/pipe.

As far as fluids go, DEF is fairly innocuous — it’s nontoxic, non-polluting, non-hazardous and nonflammable. But that doesn’t mean it shouldn’t be treated with the same respect as other fluids found in your fleet.

“Similar to any fluid used with equipment and vehicles, DEF fluid and tanks should be kept free from debris,” says Schroer. “To minimize the risk of contamination, you should treat DEFs like any other fluid you use with your machines — such as lubricants, coolants and fuels — by ensuring that they are always stored in containers and remain clean.”

DEF comes in a variety of container sizes, from 1-gal. bottles up to 330-gal. IBCs (totes). It’s recommended that it be stored in its original packaging, or placed in containers made of approved materials.

“The material used for storing and/or transferring DEF should be compatible with DEF,” says Leprince. “High-density polyethylene can be used in bottle packages, but larger containers should be stainless steel or other ISO 22241-approved materials.”

Under ideal conditions (not exceeding 75° F), DEF can be stored for up to two years. But it can degrade over time.

“We don’t recommend storing DEF for more than one year,” says Gary Simons, director, Technology Development - Exhaust/Emissions, Donaldson Company, Inc. “The amount of DEF purchased should match the usage rate... DEF containers should be stored between temperatures of 15° F and 90° F, and not in direct sunlight.”

Schroer adds, “DEF should be stored in a cool, dry, well-ventilated area out of direct sunlight. The shelf life of DEF is a function of ambient storage temperature... DEF will degrade over time, depending on the temperature and exposure to sunlight.”

In general, exposure to high heat has minimal impact on performance. “At elevated temperatures and for a long period of time, the urea in the water will decompose and the resulting mixture will change [the urea] concentration from the original 32.5%,” says Leprince. “SCR systems rely on a precise injection of DEF. If urea concentration is slightly lower, performance of the system will be slightly reduced.”

However, it can affect fluid consumption. According to Williamson, the average DEF usage rate is 2% to 4% of the diesel fuel usage rate — in other words, for every 100 gal. of diesel used, 2 to 4 gal. of DEF will be consumed. The percentage usage increases if DEF is exposed to high heat over an extended period.

“Even if the integrity of DEF is compromised from ambient conditions, it is still usable in SCR engine systems,” he states. “It will just be consumed at a faster rate.”

Freezing also has a minimal effect on DEF performance. DEF begins to crystallize and freeze at 12° F. “The 32.5% urea concentration is the ideal solution, as it provides the lowest freezing point,” Schroer states. “At 32.5% concentration, both the urea and water will freeze at the same rate, ensuring that as it thaws, the fluid does not become diluted or over concentrated. The freezing and thawing of DEF will not cause degradation of the product.”

Freezing is not a problem with onboard DEF tanks, since the SCR system is set up to provide heating to thaw DEF in the tank and supply lines. However, storage at temperatures below 12° F is not recommended for stationary tanks. “If exposed to these low temperatures, [DEF[ would need to be heated in order to thaw,” says Leprince. This could require the addition of in-tank heating devices and/or potentially delay refilling of vehicles and equipment.

Maintaining the cleanliness and purity of DEF is important to ensure proper vehicle and equipment function.

“As vehicles with SCR systems become common in the construction market, contractors will need to handle DEF properly to keep their vehicles running as intended,” says Simons. “Both EPA and ARB have introduced rules requiring SCR systems to monitor the quality and quantity of DEF in vehicles. If the DEF quality doesn’t meet specified levels, the vehicle performance is supposed to be derated and the operator notified that there is a problem.”

According to Williamson, there are no special handling procedures specified for DEF other than to ensure that it is strictly used in the DEF tank. “On the truck, there is a DEF tank — only fill it with DEF,” he emphasizes.

The risk of cross-contamination with diesel fuel is reduced via the use of a smaller nozzle diameter for dispensing DEF into onboard tanks. A blue tank cap also helps to distinguish the DEF tank from the diesel fuel tank.

DEF filters built into SCR systems also help to minimize ingress of solid contaminants. Of course, these filters must be maintained to remain effective. “[The DEF filter] needs to be cleaned every 3,800 to 6,400 hours (or 150,000 to 250,000 miles),” says Williamson.

Overall, the biggest risk of contamination stems from transfer of DEF from one container to another. “DEF can be easily transferred from large storage totes to smaller containers for easier transport,” says Simons. “However, the containers must be clean and used for DEF only.”

Because DEF is corrosive to many metals (e.g., copper, aluminum, mild steel), storage and transport containers must also be made of stainless steel or approved plastics (e.g., polyethylene or polypropylene).

“Although SCR systems include several filters in the DEF tank and supply pumps, those filters can become plugged if contamination is significant,” Simons cautions. “To keep the risk of contamination minimized, only use clean storage containers and prevent debris from migrating into DEF tanks when being filled or transported.”

"Ultimately, there is no need to maintain any additional equipment related to SCR or DEF on a jobsite or contractor's facility," asserts Brad Williamson, Daimler Trucks North America, "DEF is available at more than 3,500 locations across North America."

DiscoverDEF.com provides an extensive listing of truck stops and retail locations that carry diesel exhaust fluid, as well as a Fleet Supply page to find suppliers that will deliver to your location. Use the Search function to find a supplier close to your current address or near the address where you're heading.

Steps to Successful Handling of DEF

"Oxides of nitrogen (NOx) are a byproduct of engine combustion," says Gary Simons, director, Technology Development - Exhaust/Emissions, Donaldson Company. "NOx in the atmosphere leads to the formation of smog and ground-level ozone, both of which can contribute to respiratory disease."

Emissions control solutions such as selective catalytic reduction (SCR) with diesel exhaust fluid (DEF) are being used to help reduce NOx emissions from various types of diesel-powered vehicles and equipment.

"[DEF] is a carefully blended aqueous urea solution of 32.5% high-purity urea and 67.5% deionized water," explains Clint Schroer, off-highway communications, Cummins Inc. "Urea is a compound of nitrogen that turns to ammonia when heated. It is used in a variety of industries, including as a fertilizer in agriculture."

DEF works by generating a chemical reaction between the exhaust gases and ammonia that breaks NOx/exhaust down into harmless components.

"When DEF is injected into hot exhaust as a fine mist and passed over a catalyst, [it] helps convert NOx into nitrogen gas and water vapor," says Simons. These byproducts are then expelled into the atmosphere via the exhaust stack or pipe.

That doesn't mean it can be taken for granted, however. "DEF is not considered hazardous," Simons acknowledges, "but basic precautions should be taken when handling, like using eye protection and gloves. If DEF is spilled on bare skin, it can cause itchiness or irritation.

"DEF should not be ingested," he adds.

According to Brad Williamson, manager, Engine and Component Marketing, Daimler Trucks North America, handling DEF is pretty straightforward: store it in its original container; handle it with gloves; and, if spilled, clean it up with soapy water. Beyond that, he says, "The only requirement is to put DEF in the DEF tank — nowhere else. Put diesel fuel in the diesel fuel tank — nowhere else. If these two steps are followed, the system is designed to work efficiently in all applications."