Big-bore buyers can get a Prostar with Cummins ISX 15 in January, expect first Internationals with selective catalytic reduction and DEF tanks in April 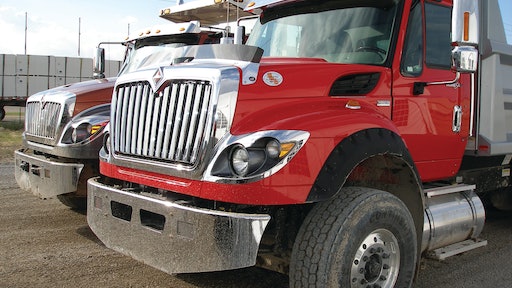 Maxxforce 11 and 13 engines will be available with Cummins SCR aftertreatment in International Prostar and Workstar trucks in April of 2013.

Controversy swirling around Navistar and its pursuit of a diesel emissions reduction solution unique to the truck industry finally has a reason to begin dissipating. At a vocational-truck sales boot camp in Utah, the company revealed the 2013 schedule of introducing its heavy-duty International trucks with Navistar Maxxforce 11 and 13 engines paired with Cummins aftertreatment using now-industry-standard selective catalytic reduction technology (SCR).

Perhaps the biggest news from the event is that the Cummins ISX 15 will replace Navistar's Maxxforce 15 for customers who want big bore power.

Hebe: Why End the Maxxforce 15?

Hebe: Was EGR the Wrong Decision?

Navistar's heavy-duty Advanced EGR technology hadn't met EPA's exhaust-cleanliness limits since 2010. The company satisfied regulators by applying emissions credits it had earned by selling Maxxforce 11 and 13 engines that were cleaner than EPA required prior to 2010.

Difficulty arose when Navistar's credit bank began to run dry before the company could make the exhaust from Advanced EGR engines match the EPA prescription. Competitors sued when EPA issued a rule that allowed Navistar to continue to sell essentially noncompliant engines by paying what's called a non-compliance penalty (NCP) for each.

The suit raised the penalty to $3,775 per engine, which made reliance on developing Advanced EGR economically unfeasible. So Navistar relented, and chose to add the SCR aftertreatment package from Cummins Emissions Solutions to its DT and Maxxforce engines between January 2013 and 2015.

"We're going to continue to build engines with EGR, with NCPs (Advanced EGR with no SCR, paying the EPA's penalties), for as long as it makes economic sense and until we can convince our customers that are running the current product that the reliability and fuel economy of the SCR solution is going to be as good or superior as what they're running today," Hebe said.

"So there's going to be a transition period where we're going to have customers who are running both (Advanced) EGR and SCR. And by the end of '13, there will be no more Maxxforce 13 EGR.

"But we got Cummins back in the product lineup, we've got a clear path to where we need to go in terms of emissions, we've solidified the financial position and structure of the company," Hebe said. "We're focused on the right things

While conceding that it would "Take us some time to get things straight," Hebe said, "We feel pretty comfortable about where we are; I know I do. And that's something new for a lot of us. We hadn't felt real comfortable for a while."

Hebe: Comfortable With the Costs?

Tim Shick, Navistar's vice president of North American Engine sales, said nothing changes on Navistar engines fit with Cummins SCR. Only a Navistar lambda sensor in the turbo-out pipe (there to adjust the EGR rate) is replaced with a Cummins NOx sensor.

"We want to make this as quick and conservative a transition as possible," Shick explained.

The hardest part of the transition is calibrating the components to work together. Cummins supplied Navistar with the chemical composition of its engines' exhaust, and Navistar is tweaking its engines to replicate that exhaust makeup as closely as possible. It all happens in the components' computers.

"The emphasis is on 'get it done quickly, get it done conservatively, and get it done in the way that causes the least disruption downstream to all parties involved'," said Shick.

"There will be no (engine) rating changes – every rating for every chassis will stay the same," he explained. "Every single engine we make in every single chassis we make will make the transition from EGR to Cummins aftertreatment solution, SCR."

Navistar's planning was not yet complete at the time of the Utah boot camp, but they did not expect to introduce SCR versions of the Maxxforce DT, 9 and 10 until 2014. The Maxxforce 7 could wait until 2015 to get SCR.

"There is a slight bit of turbo lag that will be improved with this (recalibration of Maxxforce heavy duty engines to work with Cummins SCR)," said Shick. "That's kind of the dual goal of the calibration: to get 0.2 (grams of NOx per brake-hp hour), fuel economy is what it will be – we think we will continue to be a leader – and we think we can take that opportunity to improve performance a little bit even beyond what we have."

Cummins power will also appear with the ISLg natural-gas-fueled engine in the International Transtar in January 2013, and as the standard engine in the Loadstar low-cab-over-engine refuse truck in July.

The TW95 features a spacious cabin, outstanding visibility, and steel service hoods. It is an ideal loader for a wide range of applications.
June 1, 2021
Diesel Engines