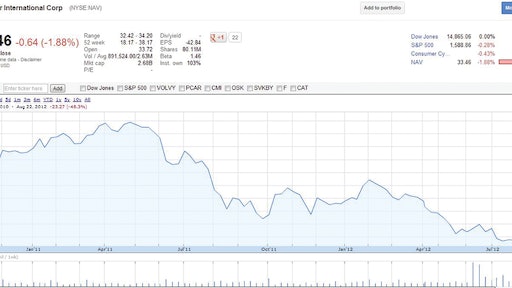 Navistar's stock price fell nearly 68% from peak to trough during the class period on news that its initial diesel-exhaust technology choice had not met EPA standards and that the SEC was investigating its accounting practices.

Suits in the United States District Court for the Northern District of Illinois are filed on behalf of purchasers of Navistar securities between November 3, 2010 and August 1, 2012. The complaint alleges that the company issued materially false and misleading statements regarding its financial condition and future prospects.

Specifically, the plaintiffs allege that Navistar misrepresented and/or failed to disclose that:

Navistar manufactures diesel engines and trucks under the International brand.

Navistar chose EGR, not the SCR route that all of its competitors were using to meet the new standards, and then represented that the new EGR technology was compliant and the vehicles were ready for sale. By the beginning of the class period, however, the plaintiffs in these class actions allege that this product differentiation strategy was not working.

Despite Navistar's $700 million investment in developing EGR, the company had not even applied to certify an engine to the EPA emissions standard by the start of the class period -- 10 months after the EPA standards became effective.

Plaintiffs maintain that the price of Navistar common stock traded at artificially inflated prices during the class period. In July 2012, Navistar admitted its failure to achieve an EPA-compliant EGR engine and announced that it was adopting the same SCR technology its competitors had been using.

On June 7, 2012, Navistar issued a press release setting forth its operating results for its second fiscal quarter of 2012 ended April 30, 2012. The press release disclosed that the company had incurred a loss of $172 million due in part to "a warranty reserve to repair early 2010 and 2011 vehicles." The company also filed a quarterly report on Form 10-Q, in which it announced that "[w]e have not yet been able to obtain 0.20g certification for any of our [heavy duty diesel] engines."

When, on July 6, 2012, a Navistar press release disclosed that the company was abandoning EGR in favor of the SCR technology all of its competitors had been using to meet 2010 EPA emissions standards, Navistar's stock price fell $4.37 per share, or 15.18 percent.

Finally, on August 2, 2012, Navistar issued a press release announcing that it was withdrawing its fiscal 2012 guidance until the release of its results for the third fiscal quarter of 2012. In that release, the company also revealed that it had received a formal letter of inquiry from the SEC connected to its investigation into various accounting and disclosure issues. The price of Navistar's stock fell another $3.33 per share, or 13.44 percent.