Tier 4 Final Engines for Aerials: How to Manage and Love

Because there are a variety of ways to install engines, the selection of aerial equipment will have a significant impact on what it takes to operate, service, and repair the unit during the life of the aerial 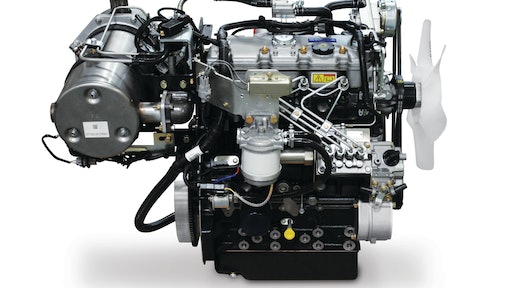 Compared to the 1970s, cars of today are clean, long-lived, require little maintenance, and are spectacularly reliable. Although owners, operators, rental companies, and manufacturers have had concerns about the arrival of Tier 4 final (Tier 4f) engines in aerials, the technology is poised to bring similar benefits, both to the engine and the environment. Equipment owners and operators can, with a little preparation, have a more reliable, easier to maintain, and much cleaner fleet.

The overall benefit for all will be improvements in air quality, which is what drove the introduction of the tiered environmental diesel emission regulations. Tiers 1-2 reduced carbon monoxide and, combined with standards for cars and over-the-road trucks, have shown stunning air quality improvements. In the late 1970s, over 90% of the air quality monitoring stations in the U.S. showed smog and carbon monoxide levels regularly in violation of clean air standards. Health alerts were common throughout the 80s and early 90s. Between 1990 and 2008, six major pollutants were down 41% in the U.S. while the GNP grew 64% 1. Today, air quality violations throughout the U.S. are rare due to reduced emissions from gas and diesel engines2. Going forward, the EPA estimates that by 2030, the reductions in nitrogen oxides (NOx) and particulate matter (PM), which are being addressed by the current Tier 4 emissions reduction effort, will annually prevent 12,000 premature deaths due to respiratory illness3. Many of the lives saved will be the very people who operate aerial equipment on construction sites and other job sites exposed to diesel exhaust.

The emissions reduction regulations have resulted in essentially all Tier 4f engines to be redesigned. The large, well established equipment manufacturers have many of their engineers dedicated to working on these new designs with engine suppliers, redesigning equipment, and testing new installations. Note, however, that even with thousands of hours of testing, some "teething pains" will occur in the field with new sensors, wiring components, and mountings.  Aerial booms and scissors will have some advantage when purchased from manufacturers who also build telehandlers because the larger telehandler engines became Tier 4 interim compliant in 2012 and required similar aftertreatment. Lessons learned on telehandlers in the field this year have been fed back into the designs of the Tier 4f installations on aerials.

Reacting to possible issues around Tier 4f engines, many have considered alternative power solutions. Alternative fuels, such as compressed natural gas or hydrogen, inherently burn cleaner but there is limited existing infrastructure to deliver them and, due to their lower energy density, they require much larger fuel storage. Hybrid power systems offer many advantages but are typically more complex and expensive. Further, benefits of the Tier 4f engines are being understood better. For example, engine manufacturers are reporting fuel efficiency gains in the 5% arena and they expect to develop even better efficiency as the direct electronic injection is optimized. In the end, there are few power solutions as elegant and simple as diesel engines.

How emissions reduction is achieved

Engines in the under 75 hp class have been Tier 4 interim since 2008 and are currently converting to Tier 4f (engines below 25 hp have conformed to a less stringent Tier 4f since 2008). Engines in this class (Figures 1 and 2), which are the vast majority  of engines used in booms and scissors lifts, require fairly straight-forward modifications. NOx and PM are controlled in this class predominantly using engine technologies such as exhaust gas recirculation (EGR) and electronically controlled engines or the after treatment technologies such as diesel oxidation catalyst (DOC), and, in some cases, diesel particulate filters (DPF). Engines above 75 hp have much more stringent NOX limits that require selective catalytic reduction (SCR), which involves adding a tank for diesel exhaust fluid (DEF) that must be filled regularly. Most aerial manufacturers were able to redesign their aerial equipment to below this power-band line and avoid adding SCR and DEF.

For the owner and operator, EGR, DOC (a type of "catalytic converter"), and electronically controlled engines are similar technology to what has been in cars since the 1980s. New diesel engines no longer rely on mechanical pumps and governors to control combustion but instead use a computer to "map" inputs from sensors to outputs for fuel and engine controls. Mechanics will recognize familiar components like O2 sensors, crank sensors, and ECUs (engine control units). Some engine manufacturers have opted to convert to common rail direct electronic fuel injectors, others had already converted their engines to this with Tier 4i, while others are using electronic controlled pumps (most likely a short term solution).

Engines with diesel particulate filters (DPF) will require special consideration from the operator and the service technician. Most DPFs require regeneration, where fuel is periodically injected into the exhaust to burn out carbon particles. This process must be regulated by a combination of automatic machine controls and operator input. Where the manufacturer requires operator input to initiate regeneration, the engine ECU may shut the engine down if the operation is delayed too long. If regeneration is automatic, it might be necessary to manually inhibit regeneration if the job location would be sensitive to above normal exhaust temperatures. DPFs will also need their filter elements periodically changed, replaced, or reconditioned. This is typically every 2,000-4,000 hours of operation.

Impacts to service and operation

Because there are a variety of ways to install engines, the selection of aerial equipment will have a significant impact on what it takes to operate, service, and repair the unit during the life of the aerial. Tier 4f engines with EGR and DOC will have fairly nominal impact; DPF will require a bit more. Ultra-low sulphur diesel fuel and low ash oil are required to avoid damage to engine components. Service technicians will save time using engine codes to assist troubleshooting. Equipment manufacturers who elect to include digital readouts tied to the engine ECU on their machines save the hassle of flashing code lights or the inconvenience of separate engine code readers, significantly simplifying service.

For rental companies and equipment owners, service will be easier if the new electronically controlled engines are embraced. Most engine issues can be found, as they are in cars, by "asking the ECU" through the codes. New service technicians, who grew up on "tuner cars" will take to this naturally and might look condescendingly at those who try to troubleshoot with their ear instead of a laptop.

These environmental advantages have come at a cost. Less than anticipated so far, it is still a 5-7% increase in delivered equipment cost. This will have to be passed to the owners of the buildings and users of the aerial equipment in the form of higher rental rates and/or cost of goods produced. During the initial transition, the availability of pre-Tier 4f equipment, will drive some of this cost against rental company and manufacturer bottom lines.

The logical question is "What is next?". Although Tier 4f is the final planned step to address pollutants, it does not reduce the greenhouse gas carbon dioxide in the exhaust. Carbon dioxide is not a pollutant but a natural result of combustion. Produced in large quantities by all engines, it is impractical to filter out and collect. The only current effective measure is to improve machine efficiency, burn less fuel, and produce less carbon dioxide. There is no easy way to set efficiency standards for off road equipment but it is the most likely next "tier".

For now, our industry has the opportunity to leverage the new technologies in Tier 4f  engines for better productivity and reliability. Engine manufacturers need to quickly address early issues; create kits for "de-tiering" so used equipment can be sold into less regulated markets; and continuously improve the efficiency and reliability of engines. Equipment manufacturers should leverage these new technologies to make aerials easier to work on and more reliable. Owners and operators will need to train and commit to keeping their machinery working as designed and pollutants low. Finally, regulators need to consider this new, cleaner diesel exhaust and modify highly outdated spark arrestor and indoor use rules (such as scrubber requirements) to reduce using unneeded after treatments.

The emission reduction regulations have provided some challenges since 1995 when they were first introduced. Now, however, we are in the final stages of this tiered emission reduction work and can see significant air quality improvement. As the Tier 4 equipment comes to market, we should embrace this new technology and enjoy its benefits to make better engines and a cleaner environment.