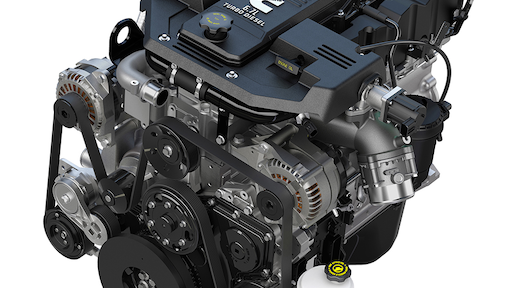 Cummins Inc. announced today that it has received certification for its 6.7L Turbo Diesel from the California Air Resources Board (CARB), meeting the Low-Emission Vehicle III (LEV III) standards. This new standard applies to all vehicles under 14,000-lb. GVWR. The Cummins 6.7L Turbo Diesel powers the Ram Heavy-Duty lineup, and is the first medium-duty diesel engine in the 8,501-14,000-lb. GVWR segment to be certified to the new 2015 LEV III standards.

"At Cummins, we demand that everything we do leads to a cleaner, healthier and safer environment," said Jeff Caldwell, General Manager - Pickup Business. "Being the first in this segment to certify to these new standards demonstrates our continued commitment to the environment, and meeting more stringent requirements without hardware changes allows us to maintain the proven capability and reliability that our customers have grown to expect."

Under LEV III, the nitrogen oxide (NOx) and non-methane organic gas (NMOG) standards are combined into a single NOx+NMOG standard, along with extension of emissions-useful life to 150,000 miles for emissions control systems. LEV III standards also introduce more stringent NOx+NMOG fleet average requirements, which phase in from MY 2015-2022 for all medium-duty vehicles. These new standards were adopted by the Air Resources Board (ARB) in January 2012.

This comes as Cummins implements its most comprehensive environmental sustainability plan ever. The plan, announced in early 2014, builds on past successes to address the company's biggest opportunities to make a positive environmental impact - from the materials it buys to its products in use. The plan also includes specific goals for Cummins to reduce its environmental footprint.

Cummins began providing diesel engines to Chrysler in 1988, and has shipped over 2 million engines in the last 25 years.

The company will now handle sales and service for the entire continent of North America including the United States, Canada and Mexico as well as the United States Territories including Puerto Rico and the U.S. Virgin Islands.
Hatz Diesel Of America, Inc.
February 11, 2019

With the example of the European Union’s more stringent Stage V diesel emissions limits, will the U.S. be satisfied with Tier 4 Final?
Nathan Medcalf
February 4, 2019
Follow Us