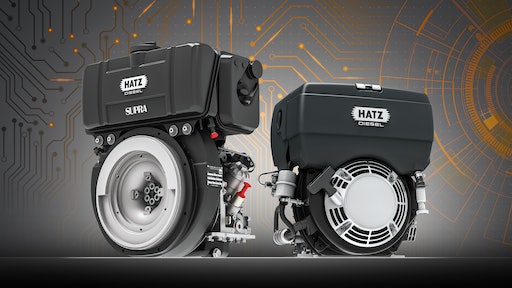 At the beginning of January, Hatz's latest generation of engines with E1 technology received their first emission certificates. This is an important milestone for the development and future of "light equipment," especially for mechanical engineering companies whose target market is North America. This is the first time that single-cylinder industrial diesel engines with electronic injection and control have been certified according to the currently valid U.S. standard EPA Tier 4 Final.

The Hatz 1D90E engine is the peak performer of the range. At almost 14 horsepower, it is the most powerful single-cylinder diesel in the world, according to Hatz. Hatz 1B50E, 1B30E and 1B30VE cover the output ranges up to around 11 horsepower and 6 horsepower respectively with extremely compact dimensions.

The E1 technology from the Lower Bavarian engine specialist Hatz is where the digitization of compact engines begins. It paves the way for a networked future, for example, for hand-guided machines, mobile light masts or power generators. It will also provide availability of data on all engine performance characteristics, the possibility of round-the-clock localization, evaluation of equipment utilization or the ability to perform remote diagnostics and maintenance.

With all this, Hatz bridges the gap between engines that were once mechanically controlled and the requirements of modern, digitized companies.

The E1 technology has also been honored in the U.S. for the 2019 achievement with the Diesel Progress Award. The jury primarily based its decision on the groundbreaking development of new technologies: "Hatz impresses with the electronic injection and control of compact, powerful engines, as well as the accompanying connectivity for the Internet of Things."

High-pressure common rail fuel systems in diesel-powered construction equipment have many benefits but require proper care.
May 8, 2019
Follow Us