Briggs & Stratton earned the honor based on its economic impact, community involvement and corporate responsibility, and commitment to workforce development and excellence 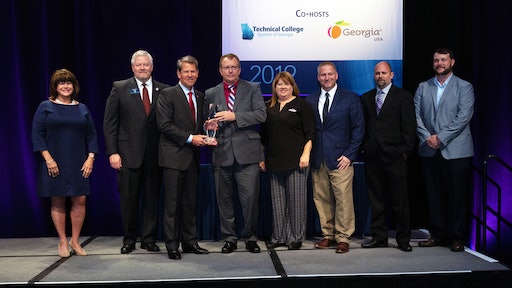 At a luncheon held April 18, Gov. Brian Kemp named Briggs & Stratton Corporation, located in Statesboro, GA, the winner of the 2019 Manufacturer of the Year award in the category of Medium Manufacturer with 151 to 500 employees.

Briggs & Stratton earned the honor based on a range of criteria, including its economic impact, community involvement and corporate responsibility, and commitment to workforce development and excellence.

Companies such as Briggs & Stratton, “have created jobs, proven their commitment, and are critical to our state’s prosperity,” said Gov. Brian Kemp in his keynote address during the awards luncheon. “Today we honor some of the best, most advanced manufacturers who have been thriving here in Georgia for years.” Briggs & Stratton has operated in the Statesboro community since 1995 and employs approximately 430 people at its facility in Statesboro.

“About a year and a half ago, we began work on our Vanguard program,” said James Suchovsky, Statesboro plant manager of Briggs & Stratton, the world’s largest producer of gasoline engines for outdoor power equipment, including the newest production of its V-Twin Vanguard engines. Bulloch County and State of Georgia leaders helped ensure Briggs & Stratton’s Statesboro plant “would be the place to make what we needed to.”

Amanda See, human resource manager, said Briggs & Stratton’s success could not have happened “without the support from our state partners, Ogeechee Technical College, and Georgia Quick Start. Quick Start has always helped us with training plans to ensure we have the skills needed to make engines. We look forward to many years of collaboration with Quick Start.”

The Statesboro facility began operation in 1995 and is the largest manufacturing employer in Bulloch County’s Gateway Industrial Park. The company recently moved production of its V-Twin Vanguard engines from a joint venture partnership in Japan that created nearly 100 new jobs in Statesboro.

Briggs & Stratton and its employees have been one of the largest financial supporters of the United Way in Bulloch County and employees provide leadership on various business and civic boards, including Leadership Bulloch and Kiwanis Club.

The first in a complete line of all-new single-cylinder horizontal shaft commercial gasoline engines is built from the ground up based on customer input.
Briggs & Stratton Corporation
January 22, 2018

Before ethanol, oil options were limited and air filters needed changing frequently, but those days are fading as engines advance and with features to reduce maintenance
Tom Billigen
November 20, 2017
Follow Us