What is Your Fluid Telling You?

Learn how to use fluid analysis reports to spot potential problems. 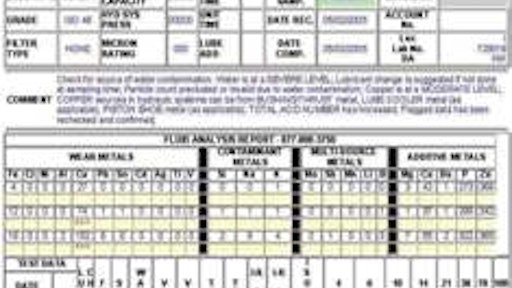 Physical characteristics such as appearance and odor can identify gross contamination in a fluid sample. But for optimum performance and longevity for your equipment fleet, you'll want to know what's going on with your fluids long before it's this obvious.

"Visual appearance of the fluid is a pretty good aid for identifying when something is excessive," says Shawn Ewing, technical coordinator, ConocoPhillips Lubricants. "But don't rely strictly on the physical condition of the fluid to identify problems."

Instead, sending the fluid to a reputable lab for analysis is an important tool for monitoring what's going on with the lubricants in your fleet. "If you can identify something that is slowly increasing, it gives you the ability to schedule service," says Tom Bell, manager of laboratory testing at Chevron. "Your ultimate goal should be preventive rather than reactive. Prevention gives you the ability to do repairs on your own timeframe. That way, you aren't in a hurry, nor are you tempted to cut corners on a repair to speed the process. Planning for maintenance, as opposed to being reactive to a breakdown, is a much more economical way to run a business."

In this article, experts will provide information to help you read and respond to fluid analysis reports.

"Don't be intimidated by the reports," encourages Jason Papacek, data analysis manager, POLARIS Laboratories. "There's a lot of guidance in them. And don't be afraid to work with the lab and your lubricants supplier to get the best information so you can make the best decisions."

Capture fluid performance
Most reports are boiled down to a one-page analysis that captures the performance of the fluid and the status of its host unit. And to allow faster, easier access to information, many lubricant suppliers and independent labs are making the reports available through online programs.

For example, there are features within computerized oil analysis programs that allow you to summarize data and compare it from one time period to another. They can also help to summarize histories of individual units, which can be combined with maintenance records to enhance resale value.

What does it all mean?
Whether you get reports on paper or via email, start by reading the recommendations/comments and identifying any areas that need immediate attention. If you are part of an online program, many labs will also send email notification of abnormal or critical issues, enabling you to act more quickly.

If you do get a critical report, don't panic, advises Bell. "A lot depends on the situation," he says. "Typically, a resample will be recommended to determine if it is truly a problem with the equipment or if it's the fluid or the lab. If you went from 'normal' to 'critical' in one analysis, there may be an error with the sampling. You want to be cautious about making a radical decision based on one test result. Instead, look at several reports together and take it all into consideration."

Most suppliers and labs recommend tracking at least three samples to create a history that will highlight any trends developing with your equipment.

"Histories will allow you to see if something like iron is starting to creep up with each successive report," Bell notes. "Then you know you're getting close to doing a tear down and rebuild and you can plan for it."

Ewing adds, "You also need to keep in mind that the report contains general guidelines. Each engine will be different, so watching trends and histories is important. A lot of times, you don't need to panic about every oil analysis that is out of parameter. Talk about the results with your supplier and lab. They can help determine what you really need to focus on."

Get to know your metals
Some of the most important parts of the report focus on wear metals and contaminants, additive metals and physical properties of the fluid.

Most labs will separate wear metals and contaminants to identify foreign material that comes from internal (cylinders, pistons, etc.) versus external sources (dirt, fuel, water, coolant, etc.). This will give you an indication if a problem stems from, say, wear in the bearings or from a plugged breather or coolant leak.

In many cases, lubricant suppliers will add certain metals in the form of oil additives (anti-wear and anti-foam agents, friction modifiers, etc.). When you send in a sample, it's important to specifically identify the oil so the lab can cross reference these additives to determine if "good" metals are depleting or if "bad" metals are increasing. "Wear metals and contaminants are related to what's happening with your equipment, and additive metals are related to what's happening with your oil," says Bell.

"Get to know the data," says Mark Minges, CEO at POLARIS Laboratories. "Look at the numbers and become familiar with what they mean."

The lab should be able to provide you with a reference library that identifies each metal with a possible source component. In some cases, the list is printed on the back of the report or you can find it on the lab's website. For example, an increase in iron typically correlates to wear in cylinder liners, whereas chromium is related to piston rings, etc.

"This gives you an idea of what an elevated reading could possibly mean," says Ewing.

Wear metals are reported in ppm (parts per million), and each metal and each engine manufacturer has a different condemning level. For instance, there will likely be higher levels of iron allowed in a sample than lead, since iron is a base metal in so many engine components. Also, a Detroit Diesel engine will likely have a different condemning level for metals than a Caterpillar engine.

This is why it's important to provide make and model information to the lab when you send in a sample, Betner emphasizes. It can also be beneficial to find out the condemning limits from your manufacturer.

External contaminants
External contamination will show up on the report in the form of elevated levels of silicon, sodium and potassium. If you start seeing high amounts of silicon, dirt is likely entering the system through dirty air filters and/or oil. Sodium and potassium are found in coolants and antifreeze. If they start showing up in an oil sample, it's a good indication there's a leak that may be letting coolant into the system via a blown head gasket, cracked head, etc.

"The historic offenders that can kill a component are dirt, coolant, fuel and soot," says Betner. "These contaminants can lead to catastrophic, premature failures and can bring down a component and destroy the lubrication quality of the oil the fastest. But oil analysis clearly has information present that identifies these contaminants to minimize those failures."

Some of these external contaminants will also change the physical properties of the fluid, which will also be identified in the report. "Viscosity is probably the most important physical property of the oil that you'll want to monitor because it influences proper lubrication," says Betner. "If it's too thick, it won't flow when it's cold. If it's too thin, it won't adequately protect the components."

Viscosity of engine oil can change via several offenders. For example, raw, unburned fuel that has gotten into the oil through a worn or damaged injector or fuel pump will dilute viscosity. Conversely, soot (linked to increased iron) and coolant (identified through elevated sodium and potassium) will cause rapid oxidation and thicken the oil. This shows up as increased viscosity.

"If viscosity goes up too much, it will start to plug oil galleys, which will cause the engine to fail due to lubrication starvation," says Papacek. "Also, because of the nature of coolants' corrosiveness, it will begin to attack soft metals, such as main and rod bearings, which are made from lead, copper and aluminum or tin. The coolant washes out the bearings and takes the crankshaft with it. Soot, which is a byproduct of improper combustion caused by inadequate oxygen, will cause elevated iron levels from wear on the engine. There's a direct relationship between just about every contaminant and every component, so it's important to understand the relationship between contaminants and wear."

Combine the tools
Every oil has a starting acid number based on the amount and type of additives. As such, you will want to become familiar with TAN (total acid number or acid number) and TBN (total base number or base number).

TAN is the measure of the amount of acids, and is most commonly used with hydraulic fluids. It's important to know where it starts, so you will want to provide your lab with a new lube reference sample for each oil being tested. As the oil degrades, this number will increase as a result of oxidation, water, fuel or other contaminants in the oil.

TBN measures the alkalinity reserve of an oil, i.e., the ability of the oil to neutralize acids that form when diesel fuel mixes with air during the combustion process. This number will begin to decrease immediately.

"The theory with engine oil is to find the ideal point to change the oil," says Minges. "You can do that by running acid and base number tests."

For example, let's say you have a fluid with a starting point of 10 TBN and 2 TAN. As the base number depletes, the acid number increases. "Ideally, you want to change the oil when the two numbers meet," Minges advises. "If you get to a base number of 4 and an acid number of 4, that means the oil no longer has the ability to neutralize the amount of acids in the oil."

In the end, fluid analysis is a tool in the toolbox. Just being able to read a report isn't effective if you don't manage the entire program. This includes taking samples properly and consistently, then following through by managing the data and consulting additional diagnostic tools.

"Fluid analysis isn't the be-all/end-all of a maintenance program," says Minges. "Use it in conjunction with other tools such as vibration readings, pressure check readings, etc. Look at them simultaneously to make the best decision about your fluids and your equipment." ?

There are three important inspection zones in common oil reservoirs and sumps, and each has a story to tell about your oil and machine
June 1, 2018

Video shows the step-by-step best practices for drawing a used-oil sample with a vacuum pump through a diesel engine's dipstick tube
April 3, 2018

One common maintenance schedule across your fleet, and eliminating oil analysis, may be raising material and labor costs and increasing risk of catastrophic failure
January 9, 2018

Used oil filter analysis may provide your best evidence of machine degradation, tracing a history of machine particles created and contaminants ingested over a period of time
January 9, 2018

With the newest engine oils now a year old, data from your oil analysis program can help contractors see just how well the new oils are working in their engines
December 6, 2017

A no-tolerance approach to varnish is the best method to ensure varnish accumulation does not harm your oil or operating equipment
October 4, 2017

How to Determine an Oil's Energy Efficiency

What type of data should be collected to determine an oil's energy efficiency
May 3, 2017

If oil analysis is not done correctly, it becomes a waste of time, money and energy
October 25, 2016

In this video, Noria’s Jeremy Wright describes three useful tests that you can perform in the field to evaluate the health of your lubricant
December 18, 2014

Video: The Truth About Additive Depletion

Noria expert Jim Fitch explains the two main types of additive depletion and why it is important for additives to deplete in order to save the oil, the machine or both
December 17, 2014