Keep your equipment running cool with proper lubricants and maintenance. 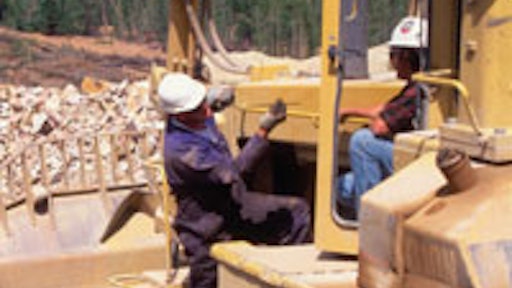 The lazy days of summer don't typically apply to contractors. For many, summer usually means more jobs, longer work days and, if you're not careful, more heat-related breakdowns.

As ambient temperatures climb to 90° to 95° F and above, you need to be aware of potential problems the extra heat can wreak on your equipment, in particular, to lubricants and fluids that keep equipment running smoothly and efficiently.

"Contractors need to make sure they use the correct viscosity grade recommended for those operating conditions, and that they do not overextend drain intervals."

Typically, as the temperature rises, so should the viscosity level of the oil, advises Dan Arcy, technical marketing manager at Shell Lubricants. "As a lubricant heats up, it thins out," he explains. "That's why your engine will need a thicker (more viscous) product in hotter temperatures to provide adequate lubricant thickness."

The same thought holds true for greases, says Mark Betner, heavy-duty product manager for CITGO Petroleum Corp. Use greases with heavier base oils that tend to stay put under shock loads and reduce water washout in the summer. Also, greases that contain 3% to 5% molybdenum disulfide (moly) will help reduce wear in heavy contamination and high load conditions. It may be necessary to use a winter or NLGI No. 1 grease in colder weather to maintain pumpability and flow.

A motto to live by

All of these fluids are designed for optimum performance at certain ambient temperatures. To ensure your summertime lubricant selections continue to perform as designed, follow the basic motto: keep it clean, keep it dry and keep it cool.

This applies to the inside as well as the outside of all your machines.

When dirt and mud build up under the hood (on components such as radiators, engines and reservoir tanks), they act as insulators, making it more difficult for heat to dissipate. In the case of hydraulic systems, this is especially important since most don't have any built-in coolers. They rely on ambient heat transfer to cool the fluid.

On the outside, concentrate on keeping the fill cap area clean to minimize the potential for admitting dirt and debris into the reservoir when you unscrew the cap. And when applying grease, keep any excess lubricant off of the equipment because it can attract dirt that can eventually work its way into the bearings and cause wear.

"Dirt and water are two main enemies of lubricants," says Dave Tuohy, off-highway specialist at ChevronTexaco. "Water is detrimental because it prevents the lubricant from maintaining its viscosity, and it changes the lubricity element of that lubricant. Plus, it wants to churn up into air bubbles. When it does that, it doesn't lubricate the parts correctly, which in turn creates more friction and heat."

To minimize water contamination, pay special attention to breathers. These are relatively inexpensive components that can help protect fluids from contamination with water and dirt. "A dirty breather is ineffective and allows moisture and dirt to contaminate the system," says Tuohy.

"Don't forget breathers on your service trucks," adds John Sutherland, lubrication business manager at ChevronTexaco. "They're exposed to the elements - to dust, dirt and water contamination - 24 hours a day." He recommends using a desiccant-type breather even in hot and dry climates.

Excessive heat is detrimental to all types of lubricating fluids. "As operating temperatures go up, the rate of oxidation increases," says Perry. "As a result, the service life of the oil or grease decreases. Oil drain intervals will be shorter and regreasing intervals will be more frequent."

In the case of engine oil, rapid oxidation can lead to higher wear and engine damage. In a hydraulic system, it can trigger premature hose failure, then leaks. In a transmission, it can lead to slippage and increased fuel consumption.

"Taking even 10° F out of the cooling system can equate to longer oil life and extended oil drain intervals, which is something that everyone wants," says Sutherland.

To maximize the cooling system, resist the temptation to cut corners in the summer. Don't top the system off with water. And don't run with water alone.

Although it's cheap and easy to obtain, too much water can upset the balance and open the door for corrosion.

"Using a coolant at the right concentration - which for most manufacturers is 50% water and 50% antifreeze - allows the coolant to accept more heat before it starts to boil," says Arcy. "Even though you don't fear any freezing temperatures, the antifreeze helps cool in the summer, as well as prevent freezing in the winter, so pay attention to the concentration."

Also pay attention to supplemental coolant additives such as corrosion inhibitors to ensure they are within safe limits. For traditional coolants, you will need to replenish additives quite often. Extended life coolants already contain additives that should remain effective for 6,000 hours or 300,000 miles.

As operating temperatures go up, volatility increases, resulting in higher evaporative losses and higher oil consumption. Check fluid levels frequently to ensure they are at the correct levels.

Sutherland suggests checking fluid levels twice a day when ambient temperatures are high. "Check them in the morning and then again midway through the day," he advises. "If the fluid level is too low or too high, the system won't be able to cool itself properly. For instance, hydraulic systems are designed for fluid to be resident in the reservoir for a certain amount of time to allow the heat to dissipate. If you have too low a lubricant level, it doesn't have enough time to dissipate heat. If you have too much, you don't have the space for the vapors to move off and go through the vent to dissipate."

There are certain telltale signs that lubricants may be negatively affected by excessive heat. Some, like oil analysis, spell out the problems in black and white by identifying premature degradation and contaminants that may have gotten into the system.

"If you see oxidation numbers going up dramatically, that would indicate that the oil is getting overheated," says Sutherland.

Other signs to watch for include soft and spongy hydraulics with slower cycle times. "You will not be able to transmit power as efficiently, and cycle times can be reduced," notes Betner.

Contaminants in the planetary or final drive systems can generate heat to the point where you can actually see heat waves. "I've seen it so bad that it actually begins to peel the paint off the final drive," says Tuohy. "Once it gets that hot, it can warp the gear sets, which are a huge expense to replace."

"It really only takes a few minutes to look everything over to make sure equipment is maintained and fluids are topped off," adds Arcy. "It will save you time and money by minimizing repairs and downtime."

Time is money on the jobsite. Discover how the patented pump-free fluid exchange system from Sage Oil Vac can help operators get more work done and maintain a clean jobsite. Find the lube truck, skid, trailer or cart to best fit your operation.
April 19, 2021
Follow Us