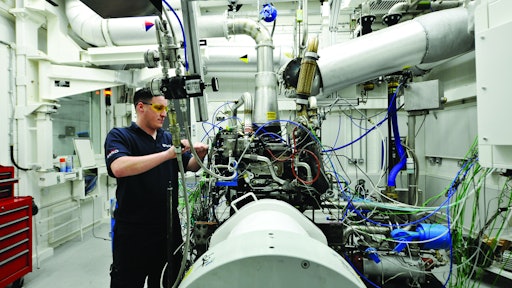 Engine test facilities, such as this one operated by Perkins Engines, validate the reliability of Tier 4 technology.

Engine technology is getting more complex and costly in the drive to meet stringent emissions requirements; but overall performance gains can still tip the scales in favor of that new equipment purchase. Besides, this technology may actually be required on some jobsites.

Do you plan on bidding work in urban areas? "Contractors who operate in nonattainment areas, which includes most major metropolitan regions, may need to utilize equipment powered by an Interim Tier 4 engine," says Doug Laudick, product planning manager, John Deere Power Systems. "The impact on contractors in nonattainment areas is significant and requires that the engines in their equipment be upgraded to comply with local regulations."

The primary ways to achieve compliance include retrofitting an existing engine with an aftertreatment device; repowering an older piece of equipment with a newer engine; purchasing new equipment; or renting an emissions-compliant machine.

Much of the concern surrounding Tier 4 centers on the unknown. Building off existing technologies minimizes the potential risk posed by a “clean sheet” design.

The use of proven technologies should bode well for performance. For instance, John Deere Interim Tier 4 engines continue to use many of the same technologies as its Tier 3 engines.

"Our Interim Tier 4 technologies have enabled the PowerTech PSX 6.8L and PSX 9.0L engine models to achieve increased power density over their Tier 3 predecessors," says Laudick. "Such improvement may allow some applications to transition to an engine platform with a smaller displacement – a change that would reduce purchase price, while delivering similar or greater performance, improved fuel economy and a smaller package size."

Many companies in the on-highway market - which must meet emission levels equivalent to Final Tier 4 - have moved to selective catalytic reduction (SCR) technology in addition to exhaust gas recirculation (EGR) and diesel particulate filters (DPFs). However, the majority of off-highway OEMs continue to rely on EGR technology with DPFs for Interim Tier 4. SCR requires the addition of a diesel exhaust fluid (DEF) tank. The DEF is injected into the exhaust stream and reacts to the catalyst.

John Deere is among the companies that continues with an EGR-based solution for Interim Tier 4. "The single-fluid approach of our cooled EGR technology means owners and operators won’t have to incur the cost of diesel fuel plus the additional cost for a second fluid (DEF) required by selective catalytic reduction (SCR) systems," says Laudick. "While SCR is an effective technology for reducing NOx, it also requires that the vehicle or machine be fitted with a separate DEF tank, a sophisticated DEF injection system and a tamper-proof diagnostic system."

Cooled EGR and other advanced technologies aren't always needed for smaller engines that must conform to slightly less stringent standards. In the lower horsepower range, the solutions are, for the most part, less complicated. "John Deere engines below 75 hp meet Interim Tier 4 emissions regulations without the use of cooled EGR or an exhaust filter," says Laudick.

Little cause for concern

Despite the success of previous generation on-highway solutions, many remain worried about potential problems of Tier 4-equipped off-highway products.

Tana Utley, chief technology officer, Caterpillar, urges customers not to fear Tier 4 technology. "Our objective in introducing this new emissions technology is to make sure the customer doesn’t even know it is there," she comments. "It is really running in the background. We have taken great pains to make sure it can be transparent to the customer. Our objective is to provide him/her with a machine that is more productive, safer and easier to use than previous machines."

Engineers have laid out well-planned strategies to clean up exhaust emissions while increasing efficiencies of the overall machine. For example, Caterpillar continues to use its ACERT technology to meet Tier 4. It uses the optimal combination of electronic, fuel, air and aftertreatment components based on the engine size, type of application and geographic location in which the machine will work. Strategically applying these technologies optimizes productivity, fuel efficiency, reliability and service life. The results for Interim Tier 4-equipped products include up to 5% improvement in fuel efficiency with increased power and performance.

Caterpillar is merely building on its current technology. "We want to build on the investment in fuel systems, air systems, electronics and aftertreatment," says Utley. "That aftertreatment is what you are going to see most visibly different with our Tier 4 emission solution."

This includes the Clean Emissions Module, which contains the aftertreatment solution. "We have designed it so that our Tier 4 Interim solution for a Clean Emission Module... will be able to carry us through to Tier 4 Final," Utley indicates. "So from a customer's external perspective, it is going to look quite similar between Tier 4 Interim and Tier 4 Final."

Cummins is also following a carefully planned strategy. After evaluating EGR and SCR options, it selected EGR to meet 2011 and 2012 emission standards. "Cummins Tier 4 Interim products will have higher power, increased productivity and an up to 5% improvement in fuel economy," says Clint Schroer, Cummins off-highway communications. "This decreased fuel consumption will allow a lower cost of operation compared to Tier 3."

In addition, an average hardworking industrial machine could achieve a reduction of 5 tons of CO2 greenhouse gas emission every year. "While these CO2 reductions are currently not regulated, some areas will offer incentives to reduce CO2 or use the latest clean-diesel technology," Schroer points out.

Solutions are customer based. "Cummins understands that the construction market values total cost of ownership and a transparent solution that is easy to maintain. To do this, we've developed our Tier 4 Interim products that allow the day to day maintenance between Tier 3 and Tier 4 to stay the same," says Schroer.

The goal with every product launch is to prevent surprises, so Cummins repowered several Tier 3 machines with Tier 4 Interim products and asked companies to run them like any other machine in their operation. After tens of thousands of hours of experience prior to the 2011 regulations, these operators had positive experience with technologies such as the Cummins Particulate Filter, which is 99% passive and transparent to the operators.

Perkins Engines reports increased power density for its Tier 4 products, while keeping maintenance to a minimum. "Basically, [with] Tier 4 Interim, we have taken the power up to 174 hp," says Mike Reinhart, director of marketing. "We are using a single or double turbocharging arrangement, depending upon the power requirements for the individual applications."

Consider the Perkins 4.4-liter engine. "The diesel particulate filter that Perkins utilizes on the 4.4-liter engine is service free and really designed for the life of the engine," says Rienhart. "It utilizes a continuous transparent regeneration, which doesn’t require any operator interface. In the 4.4-liter engine, no additional fluids are required in the regeneration system. In addition, we have maintained the 500-hour oil change interval, which is important from an end-user perspective."

With Interim Tier 4 solutions for engines above 174 hp rolling into the marketplace, manufacturers must turn their attention to Tier 4 Final requirements. The standards are already in effect for engines under 24 hp. Engines from 24 to 74 hp must meet Tier 4 Final by 2013, while those from 75 to 173 hp must meet the standards by 2015, and those from 174 to 751 hp must be in compliance by 2014.

Some companies have already unveiled technology that meets Tier 4 Final requirements. For example, Cummins unveiled the first fully integrated Tier 4 Final product for the 75 to 675 hp band at CONEXPO-CON/AGG 2011.

"As part of our direction and planning for Tier 4, the Cummins Tier 4 Final engines will be the same as today's Tier 4 Interim engines," says Schroer. "The 75- to 400-hp solution, like the QSL9 on display, will include the Cummins Compact Catalyst (CCC) and the addition of the next generation of SCR, which is leveraged from our on-highway experience." The CCC-SCR aftertreatment system Is designed to provide a compact and flexible equipment installation for Tier 4 Final in this power category.

The Cummins QSX11.9 and QSX15 products will also feature the addition of a  particulate filter and SCR. "It will allow these products to have increased horsepower at Tier 4 Final," notes Schroer. "The QSX11.9 will increase to 525 hp from 500 hp, and the QSX15 will increase from 600 hp to 675 hp at Tier 4 Final."

He adds, "The use of incremental aftertreatment technologies also allows Cummins to further improve fuel economy between Tier 4 Interim and Tier 4 Final and more than offset the cost of DEF for the 2014 and 2015 regulations."

The engines use an aftertreatment module with active regeneration to periodically burn away the soot particles that collect in the DPF. The regeneration, which maintains the DPF at peak efficiency, is transparent to the operator and has no effect on the machine's duty cycle.

Through careful design, Caterpillar asserts the heat rejection has been effectively controlled, which means cooling system requirements will not consume valuable space within a small machine's overall layout.

The jury is still out for some

Emissions solutions may vary by engine application and size. Many companies are still weighing the options for Final Tier 4.

"John Deere is continuously developing and testing the technologies it will adopt to achieve Final Tier 4 emissions regulations," says Laudick. Beginning in January 2014, he expects proven technologies such as cooled EGR and variable geometry turbocharging to be the likely foundation for engines 174 hp and above.

"However, we are constantly evaluating emerging technologies for their effectiveness and for the ability to provide reliable and durable products in off-highway applications," he states. "As with engine configurations that met previous emissions tiers, we will continue to tailor our Final Tier 4 engine solutions to fit the variety of off-highway applications."

Laudick adds, “While we are not ready to make a public announcement about Final Tier 4 at this time, we will communicate our Final Tier 4 technology choices well in advance of the regulation compliance date.”

So stay tuned, but relax. If history repeats itself, then Tier 4 Final may bring additional up-front costs accompanied with performance gains to offset the added expense.

What's the deal with Tier 4?