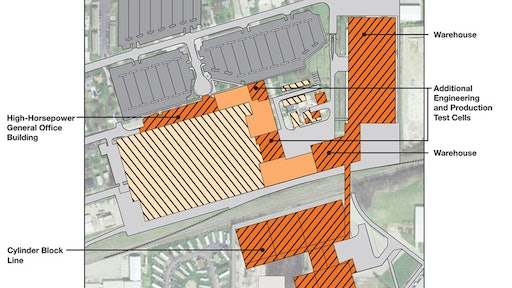 Cummins Inc. announced a significant expansion of its Seymour, Ind., campus that includes investing $219 million in new construction and the addition of 290 jobs to support the company's global high-horsepower engine business.

This is the third major announcement in Seymour in two years, and in that time the company has added new engineering and production test cells, constructed a new shipping-and-receiving dock, enlarged the energy center and begun work on the QSK95 and the QSK120.

As part of the expansion, Cummins is adding new warehouses, more engineering and production test cells, a new office building that will house up to 500 people, a cylinder block line, and parking for the new employees. Included is a new manufacturing facility for aftertreatment components for high-horsepower engines.

The new jobs are engineering and advanced manufacturing positions that will support the company's global high-horsepower business.

"The high-horsepower business is a growing part of Cummins, and because of the demand for these products throughout the world, we are able to add new high-skilled engineering and manufacturing jobs here in our home region," said Cummins Chairman and CEO Tom Linebarger.

In addition, Cummins is requesting tax abatements from Seymour on the new development, and the state is offering reimbursable training grants and will develop an inviting entrance to the city of Seymour through the gateway project.

The state, the city of Seymour and Cummins have agreed to focus on improving education in Seymour and Jackson County as part of the expansion efforts. Investments in educational programs help ensure a pipeline of skilled workers for Cummins and companies across the region and provide opportunities for residents of the local communities.

Cummins had record earnings in 2011 and expects continued strong growth this year. The company expects to reach $30 billion in sales and 18 percent in earnings before interest and taxes in 2015, with much of that growth coming in international markets in which products such as the QSK95 and the QSK120 are expected to be in demand. In fact, 70 percent of these new engines to be produced in Seymour are expected to be exported.

November 1, 2011
Latest in Other Components